The awful cliche is "it is what it is." In the case of the Democratic race, the morning, it "was what it was."

On one level, Senator Obama won the Democratic nomination for President in 2008 because of his extraordinarily effective chief delegate counter, David Plouffe, now an executive at Uber (which ungenerously, may say something about Obama).   Plouffe executed the micro-strategy, in which he "implemented a strategy that focused on winning early (Iowa), on taking delegates from small states and/or caucus states and on trying to get as much as could be had from the big states, even those where Clinton was sure to win."  "One day at a time," the 12-step programs intone; for Plouffe, it was almost "one delegate at a time."

Similarly, the result of the Iowa caucuses was not a Sanders win, a Clinton win, or a harowingly close Clinton victory which portends trouble for her. It was: Clinton 29, Sanders 21. tje delegate count which emerged from the small, overwhelmingly white, state.

Oh, this could change. Hillary Clinton, who is being portrayed as wounded from caucus night, could get a very unexpected boost from her narrow victory and surge to an unexpected victory in New Hampshire. But that's unlikely, given what is perceived as a big lead of Sanders there, as well as the mixed results in Iowa.

Then it's on to Nevada and South Carolina, as well as other states in which Mrs. Clinton is perceived to have a significant advantage, whether because of organization, endorsements, her attention to women's issues, partiality of Democratic voters to a Clinton, familiarity with the former First Lady, Senator, and Secretary of State, or other factors.  She is a flawed candidate- but not so much the damaged candidate the mainstream media portrays.

The weaknesses of her candidacy including, but not limited to, lingering fear the e-mail scandal and a stunning lack of charisma or likability, always have been there.  However, Senator Sanders probably has made her a stronger candidate, one aware she cannot be complacent and who has tacked left- and more populist- on economic issues such as the financial services industry.

So beware of headlines like Politico's headline "How Iowa Went Wrong for Hillary Clinton" and the technically accurate but misleading paragraph:

How Clinton squandered such a commanding advantage in Iowa is an all-too familiar tale with echoes of 2008, of grit and a top-dollar organization undercut by the candidate’s flaws, the stubborn ambivalence of a state that has now delivered two embarrassments – but above all her inability to capture the zeitgeist of her own party.

Great writing, but an indirect shot at Bernie Sanders, who may have had something to do with Clinton's inability to snare a resounding majority of caucus participants. (And credit those young people who appear to be demonstrating a greater concept of income inequality than their elders- chart from NBC News via Vox.)   Hillary Clinton is a terrible puncher, weak when needing to go on the offensive. But she is a magnificent counter-puncher. 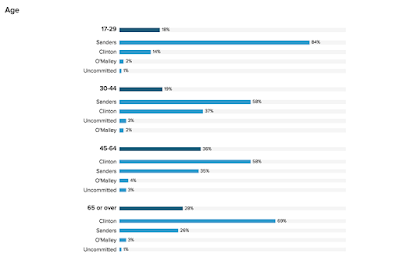 Credit Politico's writers for quoting a communications adviser to Clinton’s 2008 campaign. Mo Elleithee recognizes “There's going to be a new sense of urgency [in the primary] -- there is nothing more dangerous than Hillary Clinton as a candidate with her back against the wall. You're going to see two energized campaigns."

Next up: Steve M. is right about one thing, wrong about the other.