This is not your father's NBC News.

To be clear, Tom Brokaw was not John Chancellor and Brian Williams, with his tortured relationship with the truth (and even before), has never been Tom Brokaw.

When Rachel Maddow hugged Hillary Clinton and Bernie Sanders after their recent debate, it was viewed- accurately- as unprofessional and giving the appearance of bias.  Howard Kurtz noted "the optics of Rachel Maddow embracing the two Democrats kinda made it look like they are on the same team."

The "kinda" was actually fairly generous. Still, as Greta van Susteren pointed out, "People hug each other all the time and it is done between casual acquaintances." Unlike ignorance, insincerity, it appears, is a defense.

Maddow for her part tweeted "if/when GOP invites me to host a primary debate, rest assured I am definitely hugging those guys, too."  No one can be certain whether she was sincere (although she would be hard-pressed now to do otherwise) because she might have been issuing the Republicans a challenge: "Go ahead, I dare you to let me question your gang of extremists."

Had Megyn Kelly embraced Donald Trump and Marco Rubio after their recent debate, it likely would have rightly caused an avalanche of derision (no jokes accepted about who would ever hug that candidate from Texas).

Yet, after a day or so of criticism directed at Maddow and defense of her (barely defensible) action, the story disappeared, in part no doubt because she evinced no preference between the candidates. The shallow and superficial social hug, occasionally even in professional circumstances (as in that case), has become a part of the culture, especially on the East Coast, where the likes of Maddow and van Susteren work and live.

Thankfully, the "selfie" (itself a term indicating narcissism) isn't quite there, at least not yet. For this and other reasons, NBC News must suspend Savannah Guthrie.  Suspend her or it if she has no legitimate excuse, fire her (fat chance either will occur). But allowing a journalist, or even a quasi-journalist, to be seen in this context utterly screams bias.  It would be bad enough, and very bad, were she smiling with all the GOP presidential candidates (to draw an analogy to the Maddow hug). 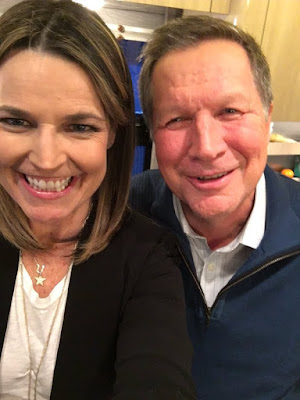 Teachers often are derided for having tenure in their jobs. If a unionized were to do something analogous, however, the best lawyer hired by the National Education Association could not save him or her from punishment.  If the explanation is good enough, let Ms. Guthrie back after losing some of her income. If not, fire her.