When Donald Trump Is The Realist, There Is A Real Problem

Admittedly, it was a little silly when Donald Trump, attacking John Ellis Bush during the debate in Greenville, South Carolina on Saturday, charged "Two days ago, he said he would take his pants off and moon everybody. And that's fine- nobody reports that. He gets up and says that. And then he tells me that, oh, my language was a little bit rough."

Trump was severely distorting (not "severely conservative") a statement made by Bush complaining about the alleged lack of coverage of his campaign.  Still, an exchange Trump had with a media-designated moderate, Young Marco, demonstrated yet again that a Trump Administration probably would be less devastating than any led by one of his rivals.

It started when Senator Rubio used terrorism as an excuse to invoke God. "I just want to say," Rubio remarked "at least on behalf of me and my family, I thank God all the time it was George W. Bush in the White House on 9/11 and not Al Gore."  He added of President 43 "I think you can look back in hindsight and say a couple of things, but he kept us safe" (photograph via CNN of President Bush keeping "us safe," below). 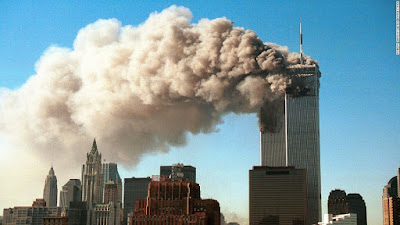 Less of a politician than most of the media have come to believe, Trump (after Rubio made a couple of more comments) failed to begin his response with "it's personal with me," a sure-fire hit from any Republican, Democrat, or celebrity. However, he did counter with

Pointing out that presiding over the largest terrorist attack in world history does not constitute keeping the nation safe did not sit well with the Republican National Committee's largely hand-picked audience of Bush and Rubio supporters.  However, the party officials and donors who packed the Peace Center did show their appreciation with Marco Rubio when he responded  "The World Trade Center came down because Bill Clinton didn't kill Osama bin Laden when he had the chance to kill him."

Marco Rubio will never be a history professor.  Though President Clinton's effort to kill Osama bin Laden and destroy Al Qaeda's camps were insufficient, they were far more strenuous than those of the guy Rubio is happy kept the White House from Al Gore. On Meet The Press in 2004 Richard Clarke, who had served both Clinton 42 and Bush 43 as counter-terrorism chief, put it into perspective when he explained

We began looking with the CIA and Delta Force at options to snatch bin Laden in 1996, 1997, 1998, and they were unable do so.  And this is one of the things I talk about in the book, the need to strengthen our intelligence and military capability so that we can do things like that.

In Marco Rubio's imagination, Bill Clinton was responsible for Osama bin Laden being able to blow up the World Trade Center. And then, praise be to God (or as Islamists would put it, "praise be to Allah"), George W. Bush was around to invade Iraq to get back at terrorists, who were sheltered in Afghanistan and most of whom were ethnic Saudis.   Or as Clarke advised officials shortly after the attacks on the WTC and the Pentagon, "invading Iraq after 9/11 is like invading Mexico after Pearl Harbor."

"It's not Trump, boys," Charlie Pierce observes of "a debate in which Donald J. Trump was on the side of empirical reality, so much the worse for empirical reality." Still, given the announcement only a few hours before the debate of the sudden death of a Supreme Court Justice: Marco Rubio could have remarked "I thank God all the time it was George W. Bush who was selected for the White House instead of Al Gore."