Charlie Pierce caught an interview of Hillary Clinton by one of the candidate's acolytes, Chris Matthews (photo from MSNBC). and observed "it appears condescension is not just a river in Egypt." Matthews claimed

Look, the history of the Democratic party—your party, not Bernie Sanders. He's not a Democrat—your party has produced the New Deal, the progressive income tax came from the Democrats, Social Security, the greatest anti-poverty program, came from Roosevelt, health-care and civil rights, and all these good things, and in every case, you had to battle Republicans against it to the last person. It's always been a tough fight. You need 60 votes in the Senate, and you need 218 in the House. And if you don't have them nothing gets done. Can the Bernie people be taught—not him, he can't be taught—can the kids behind him be told that this is how it works in our system? You can call for a revolution but it ain't gonna happen. There isn't going to be a revolution. There's gonna be an election and an inauguration and then there's going to be a Congress sitting next to you that you have to deal with. Revolution sounds like a pass. You don't have to have logic any more. We're going to have a revolution and pay for anything.

First of all, what Sanders is calling for is a democratically determined change in how we govern ourselves. He's not fcking Robespierre. The tumbrels are all in your head, dude. Among other things, Sanders is advocating for the restoration of a financial-reform system that was a pure product of the New Deal and that prevailed for 60-odd years. That's his "revolution." Just chill.

"The kids" is how Mattthews refers to young voters. It's reminiscent of the common sports talk show vernacular in which college athletes and even professional athletes are commonly referred to as "kids." It's what you call young adults when reluctant to afford them the full respect they're due.

Thus, Matthews asks, probably rhetorically "Can the Bernie people be taught—not him, he can't be taught—can the kids behind him be told that this is how it works in our system?" 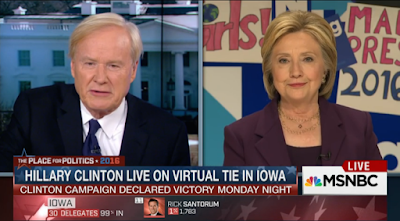 In 2014, GOP Senator John McCain of Arizona and Vermont senator and then-Senate veterans' committee chairperson Bernie Sanders addressed the huge controversy surrounding the Veterans Adminstration. McCain proposed a bill which contained a provision allowing veterans residing far from a VA facility to obtain private care. House veterans committee chairperson Jeff Miller, representing the extremely conservative and veteran-laden Florida Panhandle, added the provision to a bill he was sponsoring in the lower chamber, and it quickly passed, 426-0.

But Sanders, Jill Lawrence has written for Politico magazine, "was focused on fixing scheduling and strengthening the VA internally."  and he and Senator McCain

agreed to give veterans the choice of private care for both scheduling and distance reasons, and McCain agreed to limit the choice program to a two-year trial. Both agreed on expanded firing authority, and they compromised on how much due process to allow for those who were dismissed.

The bill passed 93-3.   However, the Senate and the House bills had to be reconciled and, Lawrence explains "Sanders and his party, with strong backing from the disabled veterans community, wanted to add new money to bolster the VA internally. Miller and the House leadership, meanwhile, wanted to focus on the private-choice program."  That would be Vermont's Bernard Sanders, whom a technically accurate but wildly misleading Matthews labeled " not a Democrat."

Soon afterward, the VA director told House Republicans that the agency needed to correct its deficiencies $17.6 billion, a number which infuriated Miller.  However

Sanders and other Senate Democrats were predictably livid. Instead of going to Miller’s meeting, they held a press conference to vent about money and collegiality. Sanders responded to Miller’s moving-the-goal-posts charge by saying he did move them—“to a much lower and more realistic number,” $10 billion less than the initial Senate bill. He said he had tried to meet the Republicans “more than halfway,” but was sad to conclude “the good faith we have shown was not reciprocated by the other side.” Miller’s approach, he said, amounted to saying “come to a meeting, vote for my bill, end of discussion.” He added: “That is not democracy.”

blamed the impasse on Obama. "Bipartisan, bicameral negotiations were making good progress, until the White House began demanding more money with no accountability, and no strings attached. Now, I want to be clear: there's going to be no blank check for the president and his allies,” Boehner said. Other Republicans blamed Sanders, who had invited Gibson to assess VA’s internal needs and ended up with what a Republican aide called “a half-baked proposal” that arrived smack in the middle of a negotiation.

a compromise was reached just a couple of days later. The House had offered zero money for VA improvements, while Sanders had asked for close to $9 billion. In the end, both sides agreed to $5 billion. Another $1.5 billion went for leases of 27 major medical facilities in 18 states and Puerto Rico. The two sides also agreed to create a Veterans Choice Fund and put $10 billion into it. The House, which had offered no due process to people being fired, agreed quickly to an appeal within a week, a decision within a month and no pay for the duration of the appeal.

The new bill passed the House 420-3 and the Senate 91-3 and was signed into law by President Obama.

After Chris Matthews' rant about how "the kids" and Bernie The Revolutionary don't understand how our representative democracy works, Clinton lectured the viewers on American history:

We had to have people who were willing to roll up their sleeves and compromise. We couldn't have ideologues who were just hurling their rhetoric back and forth. We had to actually produce results. That hasn't changed since George Washington. We have to produce results now because a democracy is a fragile organism.

Over-compensation can be quite unattractive.  Throughout the 2008 primary campaign Matthews, enamored of Barack Obama, made several controversial remarks (some arguably sexist) about Mrs.Clinton, perhaps the most (in)famous being "T]he reason she's a U.S. senator, the reason she's a candidate for president, the reason she may be a front-runner is her husband messed around."

In December, 2007 Matthews had asked journalist Chrystia Freeland about Mrs. Clinton's supporters "Chrystia, do you -- aren't you appalled at the willingness of these people to become castratos in the eunuch chorus here or whatever they are?"  Given his about face, one now is tempted to say ooh, that must really hurt, Chris.