All Aboard To Moscow


We may no know for awhile whether the latest speculation about Donald Trump's connection to the Kremlin is valid.   Similarly, we presently cannot be certain whether Hillary Clinton will be able to claim the distinction of being the first U.S.A. candidate ever to lose a presidential election to a foreign agent.

But we do know two things: Trump likes Putin and the Russian government is very, very fond of the President-elect. Politico had reported

The state duma, Russia’s lower house of parliament, erupted in applause Wednesday as Republican Donald Trump was declared the winner of the U.S. election.

“Hillary Clinton has admitted defeat in the U.S. presidential election, and a second ago Trump began his speech as president-elect of the United States of America, and I congratulate you all,” said Vyacheslav Nikonov, a state duma member, as the house applauded.

Trump returns the adulation.  We know not only from his kind words for strongman Vladimir Putin.  Nor can we be absolutely certain (nearly, not absolutely) that Kellyanne Conway doesn't speak only for herself when she professes to be unconcerned that the President-elect isn't displeased that Russia tried to upend the presidential election.

The real tip-off comes from radio host Sean Hannity.  Immediately after Mitt Romney conceded the presidential election in 2008, the GOP turned its attention to consideration of how to appeal to hispanics, whose votes played a major role in the Party's failure at the polls.   In his own election post-mortem- both a portent of the GOP "autopsy" and a reflection of its mood at the moment- Hannity stated

.... it’s gotta be resolved. The majority of people here—if some people have criminal records you can send’ em home—but if people are here, law-abiding, participating, four years, their kids are born here... first secure the border, pathway to citizenship.

Time went on, the GOP started to move back to its anti-immigration/illegal immigration stance, Donald Trump rose up, and Hannity consequently reversed his support for comprehensive immigration reform.

On Sunday, however, Hannity made known his views, which are those of his Party, currently headed by Donald Trump.  He responded to the satirical tweet "YES! All Americans must join together to MAKE RUSSIA GREAT AGAIN. Teamwork!! #MRGA" with his own "Amen!!"

Once a twit noted he had not "read carefully," Hannity deleted his tweet in favor of  "Guilty. And you are 100% correct. My mistake and I erased it and humbly apologize."

The original tweet came from a "Donnie L'il Hands" and put "make Russia great again" in all caps, Yet, Hannity claims his agreement with the message was a "mistake."

His original tweet was a "mistake"- because his hand was caught in the cookie jar, and he made Trump's preferences clear. Once a fierce critic, during the campaign he became a born-again defender of Julian Assange as the latter leaked emails in his (successful) effort to elect Trump. Now Hannity, once a Repeal and Replace Obamacare Yesterday advocate, tweets 'I happen to agree with President-Elect Trump, they should be repealing Obamacare piece by piece as they find replacement."

But he needn't have used nearly all of his 140-word allotment. He could have begun and ended it with "I happen to agree with President-Elect Trump." He's going to do what he believes he must as a loyal Republican. He will follow Dear Leader wherever he goes. And whatever the veracity of the most current intelligence revealed, Dear Leader's loyalties clearly lie somewhere east of Poland.. 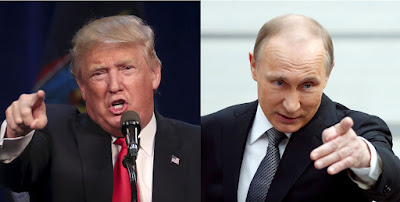