We Know What The Hell Is Going On, Donald


While Donald Trump is making America great again by barring from the USA Iranian and Afghan interpreters who helped American forces in Gulf War II, we are helpfully reminded that the President's prejudices are not limited to Arabs or Muslims, and that he has no solutions.

There was no indication whether Trump meant Justice Department lawyers, the FBI, the National Guard, or the Air Force, or why he inexplicably surrounded the word carnage with quote marks. He is Donald Trump, he will fix everything, and details are optional. He was, however, two days later doing stand-up at the GOP retreat in Philadelphia as

“What’s going on in Chicago?” Trump said. “I said the other day, what the hell is going on?”
In response to Trump’s question, somebody in the court yelled, “Democrats!”

The room burst out in laughter. Trump smirked and said, “There’s a lot of truth to that.”

There was more laughter than truth, however. Brad Heath has tweeted out the latest excerpt, from the first half of 2016, of the FBI Uniform Crime Report. You will notice that Chicago ranks 12th among large cities in its murder rate during that period. 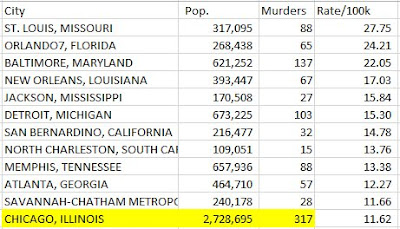 Trump doesn't cite those other urban hot spots. However, give him his due or as in the applicable cliche, "give the devil his due." A report released from the University of Chicago Crime Lab (its graph, below) indicates, according to The Trace, "among America’s largest cities — which also include Houston, Los Angeles, New York, and Philadelphia — Chicago experienced the largest jump in homicide rates in the last 25 years."

Nevertheless, the President is likely unaware of that. At last week's GOP retreat, he claimed "Here in Philadelphia murder has been steady, I mean, just terribly increasing..."

That's factually untrue- Philadelphia's serious crime problem notwithstanding, there were fewer murders in 2016 than in 2015 and fewer than a decade ago. But Philadelphia and Chicago both have Democratic mayors, and Philadelphia has a black mayor. Chicago's mayor is white but its most famous resident/prior resident is the famous Barack Obama. So Republicans have been for many years singling out Chicago for its violent crime. No coincidence, there.

It's no coincidence, either, that there is

one important change over previous years: police are recovering more powerful weapons from crime scenes. In 2016, police seized more 9mm and 40-caliber firearms than at any point in the last 15 years. This trend is not contained to Chicago. As The Trace has reported, police around the country are recovering higher caliber weapons, a shift medical experts warn could lead to increased lethality rates for shooting victims. 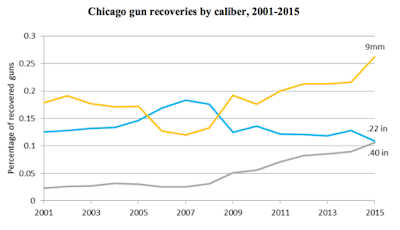 It's no coincidence, either, that the GOP platform from Trump's convention argued "the government has no business dictating what types of firearms good, honest people are allowed to own" while the Party promised to "defend the Second Amendment of our Constitution. The right of the people to keep and bear Arms shall not be infringed upon. Period."

"What the hell is going on?" Donald Trump asked in Philadelphia, about Chicago.   The University of Chicago Crime Lab concluded it is not the rise in criminal behavior "but rather a narrower one of gun crimes committed in public places frequented by young people in our city's most distressed neighborhoods."

The Trump convention made clear in its platform that it is determined that will not change. After its paean to the divine (and misunderstood) Second Amendment, it maintained that a President Clinton "would ban every gun, destroy every magazine, run an entire national security industry into the ground."  So that we know who's calling the shots with the Republican Party, it noted that was "explained" by National Rifle Association CEO Wayne LaPierre.