Language matters. It's how chemical and biological weapons are linked with the far more devastating nuclear weapon as "weapons of mass destruction," healthcare reform becomes "government takeover," and the earned benefits programs of Medicare and Social Security become "entitlements," in a manner suggesting anyone depending on them is akin to a spoiled child.

And now in the narrow corner of the ethno-left, it's Latinx, Tanisha Love Ramirez in Huffington Post argues

Latinx is the gender-neutral alternative to Latino, Latina and even Latin@. Used by scholars, activists and an increasing number of journalists, Latinx is quickly gaining popularity among the general public. It’s part of a “linguistic revolution“ that aims to move beyond gender binaries and is inclusive of the intersecting identities of Latin American descendants. In addition to men and women from all racial backgrounds, Latinx also makes room for people who are trans, queer, agender, non-binary, gender non-conforming or gender fluid.

No, "Latinx" is not "quickly gaining poularity among the general public" and hopefully it never will. Altering language to suit one's political perspective or fill an individual's psychic need does not change facts or circumstances, promoting instead a distorted or narrow view of the issue.

Ramirez links to a an unsigned post, "Mapping Hate: Tracking the Explosion of Hate in Trump's America," from Think Progress, the creation of the Center for American Progress. Included is an interactive map in which hate," a generic term applicable to all matter of human relationships, would have been helpfully replaced by the more specific, measurable "bias."   The bloggers(s) accordingly pleads "to keep the project manageable, our bar for inclusion is intentionally high."

Evidently not, however, because the map

focuses on moments of more targeted harassment and hatred — such as verbal abuse, physical assault, threats, vitriol-filled protests, vandalism, and attacks on houses of worship — committed against specific marginalized groups of people.

This is a grab bag of categories.  Vandalism and physical assault are criminal acts. "Attacks on houses of  worship" can range from the extremely serious, such as arson, to the extremely mundane, depending on interpretation of "atacks." Similarly, "threats" can range from a suggestion of murder to- well, virtually anything.  "Vitriol-filled protests" can be a particularly clear expression of bias and simultaneously protected under the First Amendment.

"Hate" comes in all forms, in all circumstances, for all reasons, between or among any number of persons. Yet, as the interactive map notes, CAP's categories are limited to "Black, Jewish, Litinx, LGBTQ, Muslim, Other." 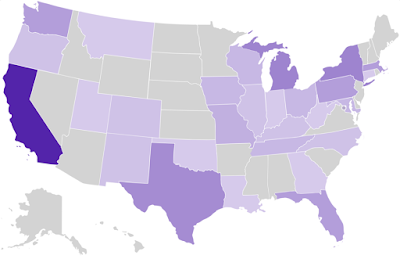 This haphazard study is not only what the right terms "politically correct." It is bad scholarship, far less meaningful than would be a comparison of affronts to these groups to those of other groups- e.g., white, Christian, or straight.  Presumably, in "Trump's America" there will be more attacks upon individuals in minority groups than upon others. If so, that is significant; if not, still significant, indicating a general explosion of intolerance.

So, too, is it crucial to distinguish between attacks motivated by "hate" of what the individual, group, or building represents and those which are not.  Candidate Trump's hysterics about crime notwithstanding, there are many criminal acts, most of which are not motivated by the narrow interpretation of "hate" given it by the Center for American Progress.

If you think you "hate" this post, think again. You may not do so. Ask CAP.