Imagine If He Had Lost

Can we put this conservative myth to rest?

New York City right-wing talk show host Mark Simone tweeted out a graph indicating that each of five influential newspapers and five broadcast networks were overwhelmingly negative in their post-convention Trump coverage. He concluded "It wasn't Russia. We found out who really tried to influence our election."

Spare me. Never has there been so much whining by a winning candidate's camp nor arguably as much about so little.

In a supremely superficial analysis, Trump's campaign received slightly more negative coverage than did that of Clinton.   Reviewing findings of the Harvard Kennedy School's Shorenstein Center, Politico wrote "Trump was covered slightly more negatively than Clinton over the course of the general election, with coverage being 77 percent negative to 23 percent positive compared to Clinton coverage running 64 percent negative to 36 percent positive coverage. "

But that's only part of the story, and a very limiting part.  As illustrated in the chart below, Media Matters' Eric Boehlert summarized a finding by Andrew Tyndall that "the three network evening newscasts this year had aired just 32 minutes of in-depth campaign policy reporting. By comparison, ABC World News, CBS Evening News, and NBC Nightly News devoted nearly three times as much coverage to the Clinton email story (100 minutes)." This did not accrue to the benefit of the only qualified, informed candidate.

The Washington Post's Erik Wemple shows the chart (below) from the Harvard study: 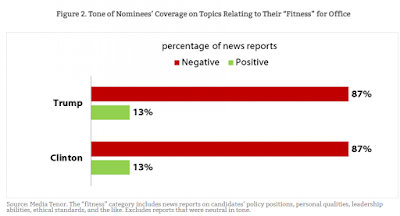 this equivalency hovers over the category of presidential “fitness for office” and includes themes such as “policy positions, personal qualities, leadership abilities [and] ethical standards.” Consider that the time period for these figures spanned from mid-August to the day before Election Day — which is to say, the weeks during which The Washington Post published the now-famous “Access Hollywood” tape that had Trump boasting about sexual assault, and the resulting flood of on-the-record allegations from women that he did just that. That the media somehow produced an equivalent amount of negative stories regarding Clinton would appear to cement its dedication to the proposition that they’re all bastards.

The concept of both-siderism was elevated to a new level during the general election campaign. Yet, while both candidates received overwhelmingly negative coverage, only one brought it on to himself with remarks which would have driven most candidates- and all Democrats- from the race.

Only one nominee many years earlier argued "laziness is a trait in blacks" and this year, "look at my African-American over here."  The Democrat was not a celebrity who declared "that must be a pretty picture, you dropping to your knees" and last year "look at that face! Would anyone vote for that? Can you imagine that, the face of our next president?”  Only one candidate said years ago that avoiding venereal disease "is my personal Vietnam. I feel like a very great and very brave soldier," and as a candidate  knocked a veteran of Hanoi Hilton as "a war hero because he was captured. I like people that weren’t captured, OK."


These weren't necessarily the worst things said by Donald Trump, nor were they among the record-setting number of lies he told.

Nor do they accunt for why the nominee, he of  "Make America Great Again,"  never was asked- as far as I know or was widely reported- why he doesn't believe this is a great country. If any Democrat had merely uttered that phrase, he or she would have been hounded for an answer before the inevitable withdrawal from the race.