Yes, Thomas Perez, we get the point:   Barack Obama- popular, a winner; Hillary Clinton- not.

In all fairness, Perez probably was thinking more about his bid to become chairperson of the Democratic National Committee than about his political mentor, whose administration he served as Secretary of Labor. He stated on the "overtime" segment of Real Time with Bill Maher

We can talk till we're blue in the face about Donald Trump's lack of character but we also have to understand on election day that we had folks who didn't touch, you know. We got enamored with data and analytics and we ignored the old persuasion- you know, you can't go to a church every fourth October and call that an organized strategy. We've got to get back to basics and you, you look at rural America- you look at Wisonsin, Mitt Romney-

We have to get out there and make house calls because Howard County, Iowa in 2012 went for Obama by 21 points; in 2016 went for Trump by 21 points.

I checked. Amazingly, that's accurate, which should lead one to ask (and not rhetorically): what's the matter with Iowa? Perez continued

That's a 42-point swing. You can't sit here and say "all Donald Trump voters are racist." There are plenty of David Dukes out there but these folks-

The challenge was we didn't touch them, we didn't listen to them. When Donald Trump comes in- in Butler County, Ohio, which is coal country-

At this point, Maher interrupted Perez, a diplomatic alternative to asking "'didn't touch them' in the manner of Donald Trump or Jerry Sandusky? or in the manner of numerous words strung together with no significance?"

Not only did Hillary Clinton go down to defeat in 2016. So did most Democrats running for the Senate, the House, and for offices in the 50 states and the District of Columbia. They did so in 2014 and in 2010, also, and in part for the same reason. 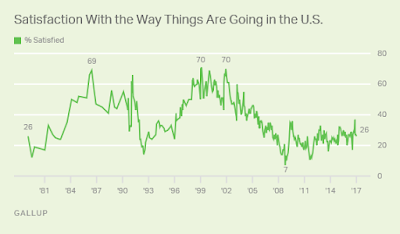 Similarly, the Real Clear Politics average of public approval of the "health care law" on November 6, 2016 stood at 40.3% while disapproval was at 48.7%, a fairly definitive verdict on the popularity of what has been commonly known as "Obamacare."

The Affordable Care Act was slightly more popular in early November, 2012- as President Obama faced off against his challenger- at -7.2%. More significantly, its salience as a campaign issue was diminished once the Roberts Court, with the majority opinion written by the Republican Chief Justice himself, found the ACA constitutional four months earlier.

Perhaps if it wasn't known as "Obamacare," acceptability would have been greater.    Specific provisions of the Affordable Care Act always have been more popular, as they were in March, 2013 (below) than has "Obamacare." There was a host of other factors- not only Clinton's unpopularity and meddling by the Kremlin and the FBI- which contributed to the Democrats' loss in the presidential race in November. 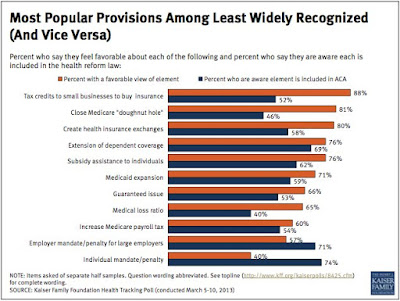 Nonetheless, an Obama cabinet member taking a backhanded jab at Clinton and implying the invulnerability of Barack Obama shoud be cautioned: slow down there, fella. Fortunately, a frustrated Heather McGhee of Demos, took exception to the cheap sociology being peddled by fellow panelists Perez and Jon Meacham. She reminded everyone "it's about NAFTA and Glass-Steagall. There's actual policy that chnged the face of this economy." And although it wasn't her point, that was another reason Hillary Clinton lost an election on ground fertilized by Barack Obama.