Trump, Rain, And Flood All Part Of God's Plan. Believe Him.

He's at it again. Reverend Franklin Graham, head of North Carolina- based organizations Billy Graham Evangelistic Association and Samaritan's Purse, spoke at Donald Trump's inauguration. He led his statement with "Mr. President, in the Bible, rain is a sign of God’s blessing. And it started to rain, Mr. President, when you came to the platform (for his inaugural speech).”

Having endorsed Trump for the GOP nomination, Rev. Graham is not a johnnie-come-lately. And in the wake of the presidential election, Reverend Graham told The Washington Post "I could sense going across the country that God was going to do something this year. And I beleive that at this election, God showed up."

A politically-conservative evangelical asked if God was at work also in the election and re-election of Barack Obama is likely to contend that it is all a part of God's plan, however much a sadist that makes of God in the eyes of conservatives.  Presumably, God has also brought about "the crime, and the gangs, and the drugs that have stolen too many lives and robbed our country of so much unrealized potential" and "this American carnage" President Trump recently invoked.

Graham is accurate when he maintains rain- at least sometimes- is used in Scripture as a "sign of blessing," as when God told Moses, recounted in Leviticus, "then I shall give you rains in their season, so that the land will yield it produce and the trees of the field will bear their fruit."  In Deuteronomy we read "The LORD will open for you His good storehouse, the heavens, to give rain to your land in its season and to bless all the work of your hand; and you shall lend to many nations, but you shall not borrow." Most of the verses mentioning rain pertain to crop growth (or food), not so prevalent in Washington, D.C. Perhaps President Trump has agricultural business interests, but without his income tax returns we can only speculate.

You will not be surprised to learn Reverend Graham is selective in citing Scripture.  He has not mentioned the admonition of (probably) John the Evangelist that "If we confess our sins, He is faithful and righteous to forgive us our sins and to cleanse us from all unrighteousness." And for those of you who are Jewish- or Christian, actually, and maybe Muslim- there is Psalm 25:11, including  "for your name's sake, O Lord, pardon my iniquity for it is great."

Trump, we know, has no reason to ask for forgiveness, having told Frank Luntz a year ago ""I am not sure I have. I just go on and try to do a better job from there. I don't think so. I think if I do something wrong, I think, I just try and make it right. I don't bring God into that picture. I don't." And truly the Almighty was raining down righteousness when candidate Trump referred to his hands and claimed "if they're small, something else must be small. I guarantee you there's no problem. I guarantee."  No doubt that was just Trump walking in the Spirit.

Some of that is harmless.  Not for everyone (photo from VVNG.com), it appears, because

California Gov. Jerry Brown has declared a state of emergency for 50 California counties that have been drenched by storms, including ongoing Winter Storm Leo, which have caused tens of millions of dollars in damage.

In this latest round of storms to pound the state, at least four people died, three were missing and others were rescued from raging floodwaters.

Anguished relatives gathered along a creek in Alameda County southeast of San Francisco as searchers looked for an 18-year-old woman whose car plunged into the rushing waterway after a collision late Saturday.

Two other people remained missing after being reported in waters off Pebble Beach on Saturday. The search along the Monterey Peninsula was suspended. 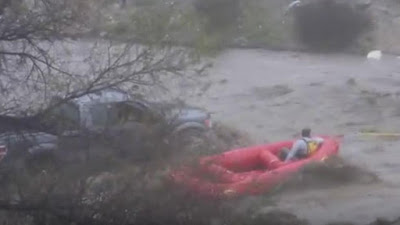 And not in southeast Asia, where recently

Thailand is experiencing deadly flooding for the second time within a month after heavy monsoon rains flooded its southern provinces. At least 19 people have died and more than 750 000 people have been affected by January 8, 2017. More heavy rain and flooding is expected over the coming days.

Nonetheless, it rained while President Trump was given his inauguration speech and when a guy has been elected by God, all dissent is petty.