And On The Other Side, Also Republicans

The New York Times reporter wrote a few days ago "One oddity of Rhode Island is that although it is heavily Democratic, its voters have elected only Republican governors over the last two decades."   In November, they will be electing another.

That might be Cranston mayor Allen Fung, who won the GOP primary on Tuesday.  Or it may be state treasurer Gina Raimondo, who won the Democratic gubernatorial primary and is known largely for getting  "the state’s Democratic political establishment to increase the retirement age, cut benefits and suspend annual cost-of-living adjustments for state employees."  The Democrat.

Rhode Island has been placing growing slices of its pension funds into higher-risk investments, entrusting the money to Wall Street financial managers who capture hefty fees. Yet the state has rebuffed requests to disclose the details of the management contracts.

In this regard, Rhode Island is in crowded company, alongside California, Pennsylvania, North Carolina and Kentucky on the list of states that have been tight-lipped about their Wall Street investment deals. But as officials this month rejected a public records request from the state’s largest newspaper, they laid out a seemingly blunt justification for secrecy: If the public learns precisely how much Rhode Island’s Wall Street managers are earning, that might make those executives feel uncomfortable.

"Fund managers keep this information confidential to help preserve the productivity of their staff and to minimize attention around their own compensation," declared the office of Rhode Island Treasurer Gina Raimondo in a letter obtained by International Business Times that elaborated the "explanations supporting confidentiality." Raimondo is a Democrat who founded one of the financial firms that manages Rhode Island pension money.

Citing the case of Eddie Lampert, an investor who was abducted in 2003 by ransom-seeking kidnappers, the letter to Assistant Rhode Island Attorney General Michael Field from Raimondo’s office further argued that disclosing too much information about financial fees and compensation could endanger the lives of hedge fund managers.

That would be a Democrat who has been worked to make hedge fund managers comfortable while breaking promises to longtime workers, forcing them to delay retirement and blocking entry into the labor force of young people.

The Executive Order under which the Commission operated directed us to investigate corrupt activity that was permissible under the New York's weak campaign finance and lobbying laws, not necessarily uncover crimes.  (This being Albany, the Commission could not help but discover potentially illegal activity along the way.) While U.S. Attorney Bharara is in possession of the Commission's files, he is unlikely to pursue non-criminal investigations, which comprised much of our work. ...

For example, to most lay people, contributing hundreds of thousands of dollars to a candidate through various loopholes and accounts in exchange for favorable legislation or lack of regulation, as Governor Cuomo did, is tantamount to bribery. This is how the real estate, telecommunications and gaming industries have operated for years.   Legislative leaders rake in huge legal fees for unspecified work.  Large corporations bankroll dozens of bi-partisan lobbying firms.  Anonymous political spending by both parties continues to grow. As the Daily Newsreported, Cuomo donors have been awarded lucrative state contracts. Of course, as long as no campaign finance or lobbying laws are broken, all of this is legal,and Governor Cuomo has left the worst and weakest of these laws in place year after year....

Cuomo is assumed to be deeply interested in the Democratic nomination for President which, in 2016, at least seems to be Hillary Clinton's for the asking.

Upon release in June of the former Secretary of State's "Hard Choices," The Guardian's Suzanne Goldenberg commented (photograph below from Jim Young/Reuters)

I've no doubt Clinton cares deeply about empowering girls and women. Her elevation of these issues (ignoring dismissive comments from the foreign policy old guard along the way) was relegated to the back of the book, but many activists have told me over the years how Clinton has stayed in close touch, and since leaving the State Department she has moved to re-purpose the Clinton Global Initiative to focus on girls and women once more.

But when it comes to another run for the White House, I'm hoping she has something to say about equality for women that goes beyond the scrunchie. 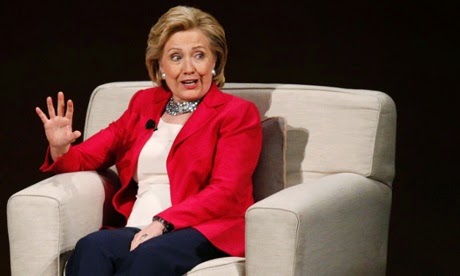 Such a statement would serve little purpose, except to highlight Clinton's insincerity.  Earlier this year, Mrs. Clinton could have supported for the Democratic nomination for governor of New York Ms. Teachot, a woman, a progressive, and- unlike Cuomo- someone who would not have covertly yet definitively undermined her own Party.  Instead

In a week spent rolling out endorsement after endorsement in advance of Tuesday's primaries, the Cuomo campaign announced that Clinton, the First Lady-turned US senator from New York-turned secretary of state,  has recorded a robocall in support of Gov. Cuomo and his lieutenant governor running mate, former Buffalo-area Rep. Kathy Hochul.

The call not only is interesting in terms of New York politics, but also has a national component. Clinton is strongly considered to be running for president in 2016. Cuomo is believed to have national ambitions, though those close to him say he'd never run if Clinton is in the race.

The call focuses on boosting the little-known Hochul among Democrats statewide, trying to counter arguments by some progressives that she has taken positions on some issues - such as gun control - that put her out of the party's mainstream.

In the call, Hillary Clinton says that, "As a New Yorker, I'd be proud to have Kathy fighting for our state. When she was in Congress, Kathy showed she knows how to find common ground but also stand her ground for what's right. As our Lieutenant Governor, she'll never, ever give up on New York's families."

No one can know for sure whether as Lieutenant Governor Hochul would ever, ever give up on New York's families, but she did give up on Attorney General Eric Holder when she joined 16 other Democrats and all but two Republicans in their political stunt to hold in contempt the A.G. for the "fast and furious" operation.

No matter.  Let's not pine for Hillary Clinton who is, like Cuomo, Hochul and Raimondo reportedly a Democrat, to indulge in any more empty or self-serving rhetoric about breaking the "glass ceiling." She would be far more honest to quote Rick in Casablanca: "I'm the only cause I'm interested in."