If Only We Could Be As Good As Jeff Gates

Is that a chip on your shoulder or are you just better than the rest of us?

Jeff Gates, who describes himself as "a Web designer, writer and artist in Silver Spring," writes

After my family arrives on the Cape May ferry for our annual vacation to the Jersey Shore, I take pictures of our two daughters on the ferry’s deck as we leave the harbor. I’ve been doing this since they were 3 and 4 years old. They are now 16 and 17. Each photo chronicles one year in the life of our family and our daughters’ growth into the beautiful young women they have become. Getting just the right exposure and interaction between the two has never been easy. They’ve gone from squirming toddlers to ambivalent teens who barely put up with their dad’s ongoing photography project.

But this year, everything was perfect. It has been an extraordinary summer in the Mid-Atlantic: mild heat with low humidity. On that first day of vacation, the sea was calm and the sky a brilliant blue. As I focused on the image in my camera’s viewfinder, the girls stood in their usual spot against the railing at the back of the boat. I was looking for just the right pose — often waiting for that perfect smile or pausing as they fixed their hair after a strong ocean breeze. I was trying to get just the right exposure and flash combination to bring out their faces in the harsh midday sun.

Totally engaged with the scene in front of me, I jumped when a man came up beside me and said to my daughters: “I would be remiss if I didn’t ask if you were okay.”

At first none of us understood what he was talking about. His polite tone and tourist attire of shorts, polo shirt and baseball cap threw us off. It took me a moment to figure out what he meant, but then it hit me: He thought I might be exploiting the girls, taking questionable photos for one of those “Exotic Beauties Want to Meet You!” Web sites or something just as unseemly. When I explained to my daughters what he was talking about, they were understandably confused. I told the man I was their father. He quickly apologized and turned away. But that perfect moment was ruined, and our annual photo shoot was over. (Only after we arrived at our rented condo did I find out I had gotten a great shot.)

At that point, you would figure Gates would have been merely happy that he had gotten a great shot, resolved to develop a good comeback if a similar situation would reoccur, and call it a day.  No such luck:

As I was telling my wife what had happened, I saw the man again, scanning the horizon with his binoculars. The more I thought about what he had said, the more upset I became. My wife and I, both white, adopted our two daughters in China when they were infants. Over the years, as a transracial family, we have often gotten strange looks and intrusive questions from strangers, but nothing like this. Yet part of me understood what he was seeing: Here was this middle-aged white guy taking lots of pictures of two beautiful, young Asian women.

Would this man have approached us, I wondered, if I had been Asian, like my children, or if my daughters had been white? No, I didn’t think so. I knew I’d regret not going back to speak to him about what had happened. My wife warned me I might be asking for trouble, but I reassured her that I would be fine.

At least when he followed up, Gates was polite, diplomatic, and more than willing to see things from his inquisitor's viewpoint.  No such luck, again:

I walked outside to where he was standing and calmly said: “Excuse me, sir, but you just embarrassed me in front of my children and strangers. And what you said was racist.”

The man didn’t seem at all fazed. He replied: “I work for the Department of Homeland Security. And let me give you some advice: You were standing there taking photos of them hugging for 15 minutes.”

I see. So we didn’t fit the mold of what he considered a typical American family, and he thought my picture-taking was excessive, possibly depraved. How long should family snapshots take? He thought he was qualified to judge. I told him I was a professional photographer and take lots of photos.

Well, no, Gates' family is not a typical American family which, otherwise, he seems acutely, smugly aware of. And if the Homeland Security guy "thought he was qualified to judge," he probably would have made an accusation, rather than offered up a question; would have been a little more direct than to say (or ask) if they "were O.K."; and wouldn't have prefaced the question with the passive, almost apologetic "I would be remiss if."

And, of course, when trying to elicit from a stranger the same tolerance you yourself exhibit, it's always wise to tell him he's being racist.

But when the Homeland Security guy was apologetic and tried to meet Gates halfway, the latter accepted the man's offer and was similarly forthcoming.  Yet again, no luck:

“My wife’s a photographer,” he said. “I understand.”

“Then you should have known better,” I replied.

He agreed to consider everything I had said. But he didn’t sound very sincere. When I had questions about his observations, he deflected them, hoping to manage my reaction with simple apologies, except they weren’t simple at all: He apologized; he criticized; and he apologized again.

There was nothing more I could say, nor did I need to hear any more explanations from him. I thought about asking for his business card or his name, but instead I just walked away, feeling exposed.

Then you should have known better, Gates responded. Could he have been any more smug?

There was one last thing for Gates to do: play the family card. "I'm not responding on my behalf, you understand, but for the benefit of my family."  Showing a fine political instinct, the Web designer, writer and artist continues

I had to consider my daughters’ feelings as well as my own. My 17-year-old, usually the stoic one, told me she almost cried when she understood what he was asking. And all the while I kept wondering: Had he overreached when he approached us, or was he just being a good citizen, looking out for the welfare of two young women? Perhaps he was doing what his professional training had taught him to do: Look for things that seem out of place, and act on those observations. But what is normal and what is not?...

Although Gates already had played the race card ("what you said was racist"), at least he eschews buzz words and avoids blowing up the incident to satisfy his own political urges.   Still no luck:

The world and its suspicions had intruded on our family’s vacation as we crossed Delaware Bay. Racial profiling became personal that day. And while our experience was minimal compared with the constant profiling experienced by others, it left a repugnant taste in my mouth.

Uh, no, that wasn't racial profiling (first cartoon by Matt Bors, second by Roy Delgado), which Wikipedia defines accurately as "the use of an individual’s race or ethnicity by law enforcement personnel as a key factor in deciding whether to engage in enforcement (e.g. stop and search or arrest)."  We could expand the definition (as Gates is trying to do) but then the phrase uses its unique meaning- and much of its power.

After clearly expressing his moral superiority, Gates, with a bit of humble brag, concludes "I’ve been thinking about this for weeks and have no clear answers. And that’s what disturbs me the most."  Finally, he has something right. He does have no clear answers, and he should be disturbed, especially at his own lack of self-awareness. 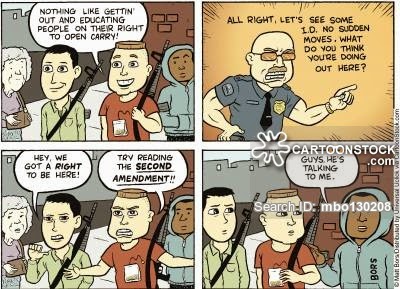 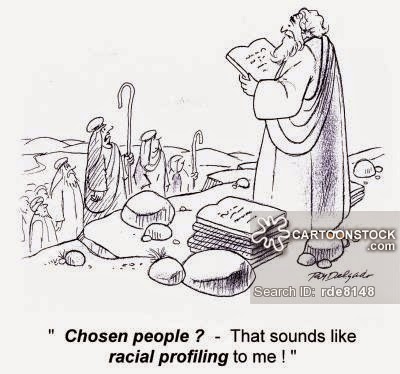 Email ThisBlogThis!Share to TwitterShare to FacebookShare to Pinterest
Labels: race