Or We Can Just Do What Feels Good


President Obama's remark to reporter on Friday that "we don't have a strategy yet" for combating ISIL (Iraqi security forces it slay in June, photo below) has unsurprisingly found few defenders.  For example, according to The Daily Beast

One has to wonder what sort of signal this administration is sending to ISIS by using tough rhetoric on one hand and then contravening what top officials just said,” said a former Pentagon official who served in Iraq. “It’s not just demoralizing to those who want to stop ISIS in its tracks, but ISIS is just going to act with greater impunity now if they believe they got a free pass. Every single ISIS leader was watching that. 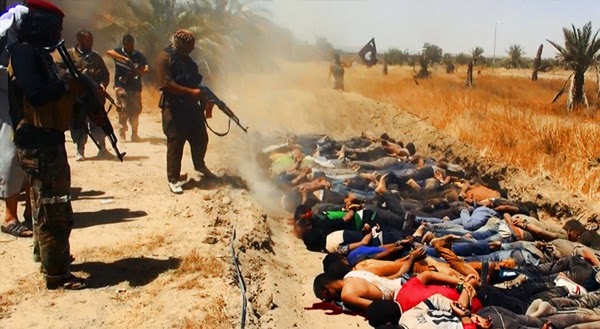 For its part, Politico Magazine on Friday published the opinions of six strategists on the course the USA should pursue to counter the most current terroristic threat.

Senator John McCain argues for arming the Kurdish peshmerga and the Free Syrian Army, as well as bombing Iraq and Syria.   By contrast, Douglas Feith, an under secretary for defense under Bush 43, urges the U.S. to recognize  "religious extremists" as "the enemy"  in order "to deal with them as an enemy... and counter the appeal of their ideology" by empowering moderate Muslims.

Some pundits like to insist that airpower can’t do much, but they need to look harder at how ISIL’s style creates liabilities for itself. ISIL arrogantly eschews the furtive, hit-and-run tactics that other Iraqi (and Afghan) militants used to escape being bludgeoned by U.S. fighters and bombers. Rather, they like to collect themselves into brazenly visible groups and use their reputation for savagery to scatter their already terrorized opponents.

All of this actually makes them vulnerable to a determined American air campaign. Among other things, ISIL isn’t going to “scatter” or intimidate American airpower. What’s more, ISIL’s penchant for operating openly—as well as for seizing, occupying and trying to administer territory instead of hiding quietly among the civilian populace—presents targeting opportunities that other terrorists assiduously avoid.

There is overlap among the positions, especially those of Senator McCain and Admiral Stavridis.   None of the individuals recommends American ground forces, probably because the populace is dead set against it. (Still, we look forward to hearing in a few months about the limits of air power. Soberly stated with no sense of irony.)

But there is a reason the article is entitled "Six Strategies Obama Could Use to Fight the Islamic State." There are differences among all approaches, with each individual fairly confident he knows the way to success, unlike President Obama who admits to uncertainty.

It would be so much more comforting if we had an Administration as self-assured as the Bush Administration was about Gulf War II.  The nation had a vice-president who shortly before the fighting began confidently maintained "I think things have gotten so bad inside Iraq, from the standpoint of the Iraqi people, my belief is we will, in fact, be greeted as liberators" and a president who four years later declared "as long as I'm Commander-in-Chief we will fight to win. I'm confident that we will prevail."   Years later, the invasion's proponents still don't acknowledge we lost the war years ago.

Act in haste, repent at leisure.  The quandary facing President Obama is illustrated neatly, though unintentionally (and this, too, without irony) by the President of the Syrian National Coalition, who told The Daily Beast

The political process is in a coma… As long as the regime continues in power, these terrorist organizations will grow in power and size, and the problem that started in Syria and crossed now into Iraq and Lebanon, will soon move across the region and eventually into Europe and the U.S.

Those terrorist organizations are the precise outfits which are trying to oust that regime.  Bomb the world's most brutal terrorist organization, and "the regime" of Bashir al-Assad, which rules with an unusually iron hand, is strengthened.   Lay off ISIL and his Baathist government will remain in power. It's a choice no one likes making, except for those who are sure they're right.