Plenty Of Money From Somewhwere

In her interview (video, here) with Stephen Colbert, Campbell Brown, founder of Parents Transparency Group and Partnership for Educational Justice, maintains "But, but you, you’re suggesting that mon, that it’s all about the money, and I think it’s not about the money." Colbert figuratively shoots her down, responding "Well, you’re suggesting it’s about equality, and money is one of the equations in equality, or have I just schooled you?"


There are at least two other reasons Brown, husband of GOP operative Dan Senor, doesn't talk about money.  She states "I think we should be paying teachers more," though without elaboration, which reveals the emptiness of her statement.  Of course, if she and her organization were to get their way. tenure would be eliminated and teachers' unions eviscerated, with obvious implications for the salary, benefits, and job protections of the average educator.

But there is another reason.  Andy Kroll of Mother Jones explained last October "As a 501(c)(4) nonprofit, PTP may keep its donors' identities secret and spend money in electoral campaigns, so long as political activity doesn't consume the majority of its time and money."  Brown did Fred Astaire and Ginger Rogers proud as she danced around the issue of her funding while she talked to Colbert:

SC: .... Um, your organization, where does it’s money come from? That’s one of the things they asked me to ask you.
CB: I, I saw that on my Twitter feed today. The, the, who’s funding this effort?
SC: Yeah, who’s funding your, your effort, [CB: Kirkland Ellis.] your organization.
CB: The law firm…
SC: The law firm is funding it?
CB: Well, the law firm is doing this for free, so we haven’t gone out…
SC: So, your organization collects no money, you don’t get, you don’t have to go about, out to raise any money?
CB: I, I, I’m going to be raising lots of money because we’re going to try to bring this work…
SC: After this, obviously the Colbert [fund], you can enroll in it, okay? [Audience applause.]
CB: But we want this to be, we want this to be a national effort, Um, we want to help parents in, in states across the country who want to do similar things.
SC: So, the Partnership for Educational Justice [7:00] has not raised any money so far?
CB: Yeah, we are raising money.
SC: And who did you raise it from?
CB: I’m not gonna reveal who the donors are because the people (pointing toward window) are out…
SC: I’m going to respect that because I had a super PAC. [Audience applause.]
CB: I hear you. But, part of the reason is the people who are outside today, trying to protest, trying to silence our parents who want to have a voice in this debate…
SC: Exercising First Amendment rights…
CB: Absolutely, but they’re also going to go after people who are funding this, and I think this is a good cause and an important cause, and if someone wants to contribute to this cause without having to put their name on it so they can become a target of the people who were out there earlier today, then I respect that.
[Silence from audience.]


Here is a photograph of the storm troopers protesting outside the studio as The Colbert Report was taped: 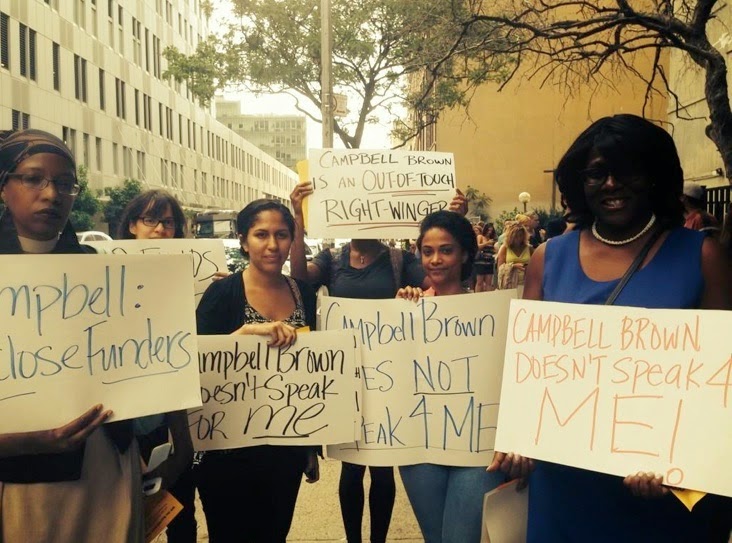 Those are the people whom Brown said are "trying to silence the debate that's a really important debate that we should be having in this country."   She suggests a classic conservative approach to the First Amendment: free speech is vitally important unless you disagree with me.

Brown's arguments have been effectively debunked, with the work of Jersey Jazzman and  Valerie Strauss. However, there is one sleight-of-hand that seems to have eluded recognition. Beginning with Colbert asking about "parents complaining," the exchange continues as

CB: if a lot of parents are complaining, there’s probably something to that, don’t you think?
SC: What if there’s someplace where the parents don’t want certain things taught to the kids? ‘Cause I’d love my kids not to be taught evolution. [Audience laughter.] Could I get a teacher fired if my community believed that evolution wasn’t a good thing, if the teacher had tenure?
CB: Now that’s one of the arguments that the union makes is that they’re gonna lose…
SC: Not in the union. I’m not in the union, [CB: Okay.] but I did get that argument.
CB: …that they’re going to lose due process rights if we change these laws, but that’s simply not true. Everybody has the right to due process and the right to a fair hearing....

Brown contends teachers are not "going to lose due process rights if we change these laws." She does not say that due process won't be slashed; merely that they won't be eliminated (lost).  Further, she notes "everybody has the right to due process and the right to a fair hearing."  And so  they do- currently; she does not deny that those rights would be eradicated if the educational "reformers" get their way, nor could she honestly.  But then, there is really very little that's honest about what corporate-backed activists are trying to do to public education in the name of "reform."

Email ThisBlogThis!Share to TwitterShare to FacebookShare to Pinterest
Labels: Education