Too Busy To Be Bothered


Mitch McConnell appeared two months ago at what The Nation described as "a secret strategy conference of conservative millionaire and billionaire donors hosted by the Koch brothers."  The publication and The Undercurrent obtained a video recording of the Minority Leader, alternately spinning  Repub myths and making no sense. In part, he is quoted (video, below) as maintaining

And we’re not going to be debating all these gosh darn proposals. That’s all we do in the Senate is vote on things like raising the minimum wage (inaudible)—cost the country 500,000 new jobs; extending unemployment—that’s a great message for retirees; uh, the student loan package the other day, that’s just going to make things worse, uh. These people believe in all the wrong things.


McConnell himself will have to explain, if asked, his sarcastic comments linking unemployment compensation and retirees.  Clearly, however, he is complaining about even debating the minimum wage, the effect of which on job losses "goes on and on — not just among politicians, but also among economists," reports an NPR blogger.

There is no question, obviously, that raising the minimum wage increases the pay of workers earning the minimum wage. Nor is there much question that it has an uplifting effect upon the wages of other other poorly-paid workers. And that is probably more important, given lagging wages and salaries throughout the economy. It appears it would have been especially helpful for Maria Fernandez (photo, below from the Star-Ledger of Newark, NJ), who

Often she drove from job to job, stopping along the road to catch a couple hours sleep, police said. She kept a container of gasoline in her 2001 Kia Sportage because occasionally she ran out of gas, authorities said.

Early Monday, the 32-year-old Newark woman pulled into a lot off Route 1 & 9 in Elizabeth for a nap. She apparently left the car running and was overcome by carbon monoxide mixed with fumes from the gas can that had overturned, police said. Fernandes was found dead in the car about eight hours later....

"These are are folks who would like to work full-time but they can't find the jobs," Van Horn said. "They wind up in these circumstances in which they are exhausted. More commonly it creates just an enormous amount of stress," he said.

Many people have been forced to work two or three part time jobs after losing a full-time position in the recession of 208.

The federal Bureau of Labor Statistics estimates that 7.5 million people nationwide are working more than one job, Van Horn said, and those jobs still leave people with less income than their full-time work.

"The average person who lost their job took a 10 percent pay cut (after returning to the workforce)," Van Horn said. 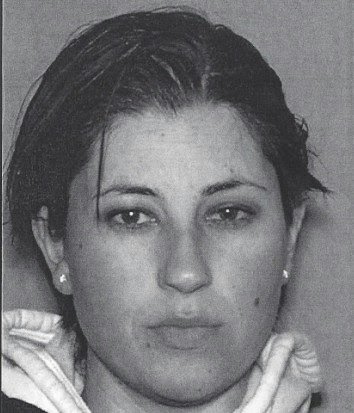 There is a particularly large number of  individuals like Maria Fernandez in New Jersey. There, recovery from the recession has lagged well behind that of the nation overall, as one should have expected under a thoroughly ineffective governor, whose main skill in in bribing companies, as illustrated below: 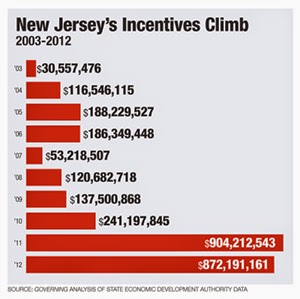 Maria Fernandez had no such job.  Elizabeth police lieutenant Daniel Saulner commented "This sounds like someone who tried desperately to work and make ends meet, and met with a tragic accident."  More tragically, she wasted Mitch McConnell's time.