Perhaps Parmesan Would Go Best With That Whine


One of the fifteen most common defense mechanisms, writes John M. Grohol, Psy.D., is projection, which

is the misattribution of a person’s undesired thoughts, feelings or impulses onto another person who does not have those thoughts, feelings or impulses. Projection is used especially when the thoughts are considered unacceptable for the person to express, or they feel completely ill at ease with having them. For example, a spouse may be angry at their significant other for not listening, when in fact it is the angry spouse who does not listen. Projection is often the result of a lack of insight and acknowledgement of one’s own motivations and feelings.

If there actually is such a phenomenon, rarely has it been so vividly displayed in public as by the National Review editor Rich Lowry, who recently dragged the impulse to new depths in an article in Politico magazine.

Lowry is free to maintain "It’s certainly true that the president is much further left than he’d ever admit," though under closer examination this suggests a meaning far different than what the he evidently assumes.  If the President's policies were not middle-of-the-road but rather liberal/progressive, he would in effect be admitting he were a leftist. Hence, Lowry is (though he'd never admit it), acknowledging that Barack Obama is governing from the center, a conclusion he wishes the reader overlook.

Elsewhere, Lowry's piece is rife with ad hominem attacks. While conceding Obama's "rousing words" as a campaigner, his "truly inspired convention speech in 2004," and "a few defining campaign speeches in 2008, Lowry nonetheless slams the President as "glib without being eloquent." Self-awareness is not this conservatives's strong suit.

celebrity without being interesting. He’s callow. It’s a trope on the right to say that Obama has quit, that he’s not interested in the job anymore. It isn’t true. If you are smug, overly self-impressed and unwilling to bend from your (erroneous) presumptions of how the world works, this is what presidential leadership looks like.

As a young lawmaker defining himself as a presidential candidate, Barack Obama visited a center for scholars in August 2007 to give a speech on terrorism. He described a surveillance state run amok and vowed to rein it in. “That means no more illegal wiretapping of American citizens,” he declared. “No more national security letters to spy on citizens who are not suspected of a crime.”

More than six years later, the onetime constitutional lawyer is now the commander in chief presiding over a surveillance state that some of his own advisers think has once again gotten out of control.

In a similar manner, Obama as a candidate also opposed the individual health care mandate, which he later found essential to his Affordable Care Act.  He has since delayed the employer mandate, once vociferously opposed by the GOP, and for which the Party's congressional leadership is suing the President for delaying.

"What Churchill was to thundering statements of resolve," Lowry argues, "he (Obama) is to snotty put-downs," itself a transparent snotty put-down. (Oh, to be a professional journalist able to turn such a well-crafted phrase).  Lowry contends "The man who once promised to transcend political divisions is an expert at the stinging partisan jab."   Yet, faced with a GOP House (one who passes as reasonable and "moderate," below) that votes in lockstep against him and a Senate minority which endlessly filibusters, the President during most of his tenure took to blaming "Congress" or "Washington." 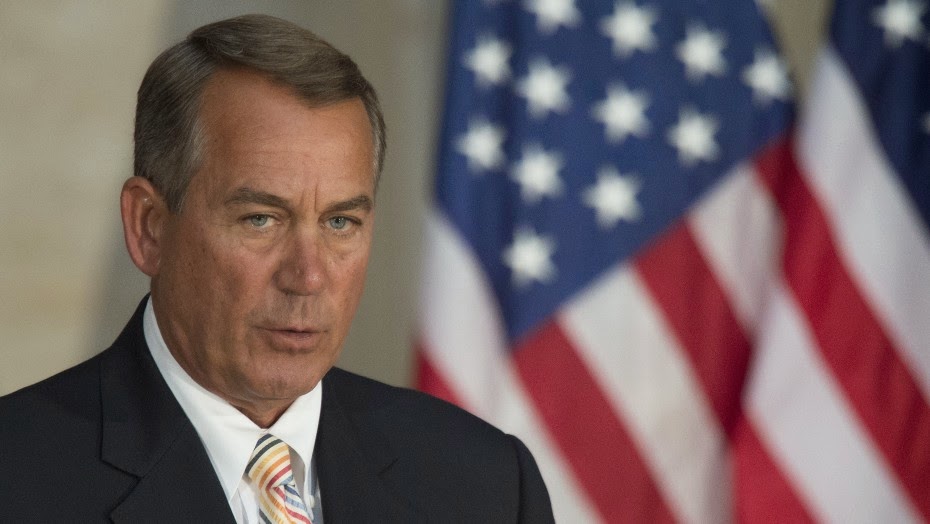 Lowry may have a hard time accepting the very legitimacy of Obama's presidency and weeps over the President's criticism of those opponents.   He  conveniently forgets, as Ezra Klein explained shortly before the Supreme Court handed down its decision on the ACA

The Republicans have made the individual mandate the element most likely to undo the President’s health-care law. The irony is that the Democrats adopted it in the first place because they thought that it would help them secure conservative support. It had, after all, been at the heart of Republican health-care reforms for two decades.

soak up his faux folksy, g-droppin’ assurances that he’s working for ordinary “folks,” and laugh at anything they suspect might be one of his brilliant barbs. Not since Jefferson took snide swipes at the Federalists …

The president’s constant complaints about everyone else in Washington playing politics while he high-mindedly devotes himself to substance have all the maturity of Holden Caulfield’s plaints about “phonies.” Please, grow up.

"In terms of his sensibility," the NR editor claims, Barack Obama is "about what you'd get if you took the average reader of The New Yorker and made him president of the United States."    Given the eight years which preceded the Obama Administration, that would be a demonstrative improvement. However, Lowry does approach substance upon remarking "He evidently has no conception of the national interest larger than his ideology or immediate political interests."

The United States has informed the UN Security Council that it has neutralised about 60 percent of Syria's most toxic chemicals.

Mark Lyall Grant, the British ambassador to the UN and the current president of the Security Council, said that the US made the report after a video-conference briefing by Sigrid Kaag, who heads the international effort to rid Syria of its chemical weapons.

He said Kaag reported that a meeting was held in Beirut on earlier Tuesday to work out methods to destroy the 12 chemical production facilities that Syria has declared. She said it will take about six months to complete.

Lyall Grant said he reported to the closed council meeting that Britain will complete its destruction of Syrian chemical precursors intended for the production of chemical weapons and hydrochloric acid "in the course of this week."

"So, good progress on the destruction of chemicals outside Syria," he said.

Syria agreed to surrender its chemical arsenal last year when the US threatened missile strikes in retaliation for a chemical attack on a rebel-held suburb of Damascus. The attack is believed to have killed more than 1,000 people.

Adopted by the UN Security Council, the deal reached, President Obama commented at the time, "not only deters and prevents additional chemical use but actually goes beyond what could have been accomplished to any military action, and that is the removal of chemical weapons, one of the largest stockpiles in the world, from Syria so that they can actually be destroyed.” If either the Obama Administration had not threatened bombing raids or congressional Democrats had not urged caution, the USA either would have become involved in another war in the Middle East or Bashir Assad further emboldened in the brutal war he is waging against citizens of his own nation.

After 2010, Lowry asserts, the President could have chosen to "work with the opposition... or crush it," but instead chosen to "whine."  Confronted with the possibility of another military conflict, Barack Obama opted for leadership while Rich Lowry opted for the whine.