Conservative Repub talk show host Michael Medved has tweeted "Attacking 'militarization' of police? If policing is so bad why is the crime rate down so dramatically over 30 years?"

A better question which arises is: does tweeting make someone stupid or is he already stupid?

Boston Globe columnist Jeff Jacoby, who describes himself as 'An op-ed columnist at the Boston Globe, a purveyor of refreshing conservative cheer in the midst of a dusty liberal wilderness," has responded to Medved  "I'd give the credit to more and longer prison terms for serious crime, not to equipping police w/ RPGs & armored vehicles."

Medved is no statistician.  As the chart below (from Wikipedia) indicates, street crime peaked in 1991. Although it declined in the first thirty years of the '80s, it rose thereafter.  Perhaps "30" was a number chosen carelessly by Medved, though it is more likely the staunch Republican chose not to acknowledge that the highest rate occurred shortly before Bill Clinton came into the Oval  Office- as in while Saint Ronald was there.

One credible explanation for the drop in crime since the early 90s' is the conservative one, that of longer prison terms, as well as increased numbers of police and wiser deployment of law enforcement resources. The law of parsimony would suggest, however, that the greatest factor would be the age structure of the population. The graph below from wikipedia indicates, as this blogger argues, "most baby boomers have grown up with a crime rate that increased from the time they were around 10 years old (plus or minus, mostly plus) to the time that they were in their mid 40′s (plus or minus, mostly plus)." 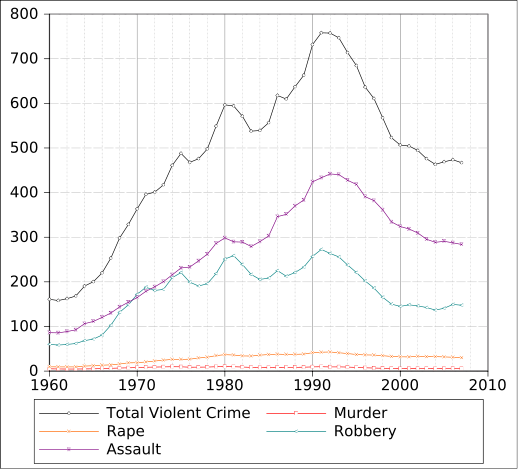 The correlation, however, is not as strong as it likely would be if all other factors were held constant.  The rise, later fall, of the crack epidemic undoubtedly affected crime rates. So, too, did the legalization of abortion, largely accomplished by Roe v. Wade, as demonstrated by Steven Levitt and John Donohue in an academic paper published in 2001 and popularized in the book Freakonomics (excerpt from the movie, below).

The theory proved controversial, as one would expect, especially because Levitt and Donohue were (falsely) accused of recommending abortion, a sin to the right.  (At other times, conservatives blame crime on unprepared, permissive parents. Go figure.) Liberals were not thrilled because it implied individuals in poor communities and in black communities (which are disproportionately poor) more often engage in delinquency, a reality recognized by most Americans but which dare not be acknowledged in polite society. Aside from the data however, it is a notion (whose critics have been largely refuted by Levitt) rooted in common sense, unless one supposes that children who are wanted and able to be adequately cared for will go on to commit crime as often as unfortunate individuals.

Early last year, Mother Jones' Kevin Drum reported on research conducted on from 1994-2012 by economist Rick Nevins (his graphs of correlation between lead and IQ and of lead in gas and violent crime, below), graduate student Jessica Wolpaw Reyes, and others, and summarized

During the '70s and '80s, the introduction of the catalytic converter, combined with increasingly stringent Environmental Protection Agency rules, steadily reduced the amount of leaded gasoline used in America, but Reyes discovered that this reduction wasn't uniform. In fact, use of leaded gasoline varied widely among states, and this gave Reyes the opening she needed. If childhood lead exposure really did produce criminal behavior in adults, you'd expect that in states where consumption of leaded gasoline declined slowly, crime would decline slowly too. Conversely, in states where it declined quickly, crime would decline quickly. And that's exactly what she found.

Meanwhile, Nevin had kept busy as well, and in 2007 he published a new paper looking at crime trends around the world (PDF). This way, he could make sure the close match he'd found between the lead curve and the crime curve wasn't just a coincidence. Sure, maybe the real culprit in the United States was something else happening at the exact same time, but what are the odds of that same something happening at several different times in several different countries?

Nevin collected lead data and crime data for Australia and found a close match. Ditto for Canada. And Great Britain and Finland and France and Italy and New Zealand and West Germany. Every time, the two curves fit each other astonishingly well. When I spoke to Nevin about this, I asked him if he had ever found a country that didn't fit the theory. "No," he replied. "Not one."

Just this year, Tulane University researcher Howard Mielke published a paper with demographer Sammy Zahran on the correlation of lead and crime at the city level. They studied six US cities that had both good crime data and good lead data going back to the '50s, and they found a good fit in every single one. In fact, Mielke has even studied lead concentrations at the neighborhood level in New Orleans and shared his maps with the local police. "When they overlay them with crime maps," he told me, "they realize they match up."

Early this year, Drum linked to an article by Lauren K. Wolf in Chemical and Engineering News in which Wolf explained

Research has shown that lead exposure does indeed make lab animals—rodents, monkeys, even cats—more prone to aggression. But establishing biological plausibility for the lead-crime argument hasn’t been as clear-cut for molecular-level studies of the brain. Lead wreaks a lot of havoc on the central nervous system. So pinpointing one—or even a few—molecular switches by which the heavy metal turns on aggression has been challenging.

What scientists do know is that element 82 does most of its damage to the brain by mimicking calcium. Inside the brain, calcium runs the show: It triggers nerve firing by helping to release neurotransmitters, and it activates proteins important for brain development, memory formation, and learning. By pushing calcium out of these roles, lead can muck up brain cell communication and growth.

On the cell communication side of things, lead appears to interfere with a bunch of the neurotransmitters and neurotransmitter receptors in our brains. One of the systems that keeps popping up in exposure experiments is the dopamine system. It controls reward and impulse behavior, a big factor in aggression. Another is the glutamate system, responsible in part for learning and memory.

On the brain development side of things, lead interferes with, among other things, the process of synaptic pruning. Nerve cells grow and connect, sometimes forming 40,000 new junctions per second, until a baby reaches about two years of age. After that, the brain begins to prune back the myriad connections, called synapses, to make them more efficient. Lead disrupts this cleanup effort, leaving behind excess, poorly functioning nerve cells.

“If you have a brain that’s miswired, especially in areas involved in what psychologists call the executive functions—judgment, impulse control, anticipation of consequences—of course you might display aggressive behavior,” says Kim N. Dietrich, director of epidemiology and biostatistics at the University of Cincinnati College of Medicine.

The relatively low correlation between lots of babies and antisocial behavior roughly two decades hence suggests that another factor, perhaps the hollowing out of the middle class, has had some impact in increasing crime. Improved policing, reduction in cocaine use, abortion legalization, and lowering of atmospheric lead density all have reduced street crime.

It's unlikely, however, that many would-be offenders have been deterred by the thought of armored weapons and police in military uniforms.  Though one is tempted to go juvenile and say Michael Medved is now the one who is high on cocaine or whatever, that would be an unfair and inaccurate assessment of someone who is merely a GOP activist masquerading as a talk show host.