In late July, Gallup undertook a survey (below) of "Americans' Views of Actions in Current Middle East Conflict."  It broke responses down by political party, by subgroup (gender, race, age, and educational attainment), and by "how closely following news about the situation." 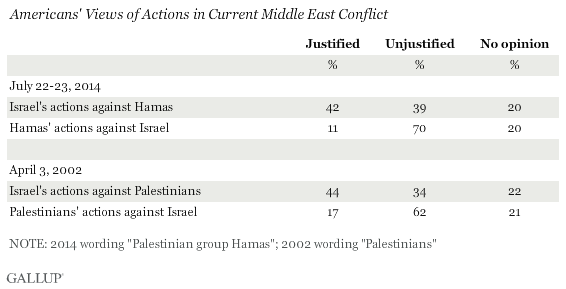 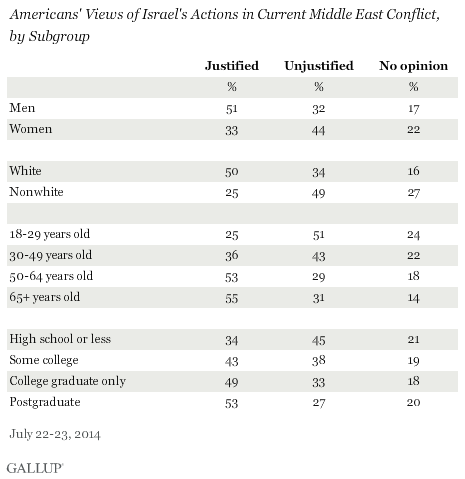 It's now a little dated, but somewhat instructive.  Gallup found Americans overall split on whether Israel's actions against Gaza were "justified" or "unjustified," though opinion came down overwhelmingly on the side of believing Hamas was "unjustified."   Most striking, however, was that pro-Israel sentiment increased dramatically as knowledge about the conflict rose, which is only fitting.

Nonetheless, now that yet another ceasefire has been implemented, the question seems, or should seem, rather quaint. There are few countries- none, one suspects- that would accept repeated missile attacks upon its soil (we would call it "the Homeland") without retaliating militarily.

But most nations would retaliate with an objective of victory. That, it seems, was never the intent of Benjamin Netanyahu.   Both Netanyahu and Hamas, perhaps even with straight faces, declared victory, but

"I don’t think any of the fundamentals have changed," said Daniel Levy, MENA programme chair at the European Council on Foreign Relations.

"Israel didn’t want to remove Hamas and it never defined its goals as removing Hamas from Gaza. Hamas has not been demilitarised. It has been weakened but only slightly, and [the war] did not weaken it politically. It is still standing and it is sending rockets.

"But given the disparity in strength, Hamas has not been able to impose its will on Israel and Gaza will not be opened up to the world. So no real change," he added.

So let's review. Hamas retains the ability to fire missiles into Israel which, it prays, ultimately will be able to hit population centers.  The blockade against Hamas, with its damaging impact upon the actual Palestinians residing in the territory, has not ended.

It was neither a victory for Gazans nor for Israelis, the latter of whom recognize that a Jewish state will not be secure unless the grievances of Palestinians are resolved. But it may have satisfied the interests of their Prime Minister.  Knesset member Israel Hassan, former head of Israel Security Agency Shin Bet, argued approximately a week before the settlement

the diplomatic approach that determined the manner and pace of our operational activity during Operation Protective Edge was the one that says that this conflict has no solution and must be managed instead, so we cannot push anything to the edge. In other words, we mustn’t push Hamas too far into a corner and improve Mahmoud Abbas’ standing, because if he gets stronger, we will eventually have to pay him back in diplomatic currency, a currency that we are not willing to lay out...

I’m very sorry to say this — it actually hurts me to admit it — but I can’t think of any other explanation for the way the IDF [Israel Defense Forces] has acted in keeping with orders from the political echelon. I would like someone to please explain why the IDF didn’t continue advancing another half a kilometer [0.3 miles] into Gaza after finishing up with the tunnels, so as to force Hamas to start folding up its flags. All of that was possible, but someone didn’t want to make Hamas any weaker than it already is, because that same someone only wanted to strike at it in a limited way. This was meant to avoid a situation in which Hamas would be weakened in a way that would strengthen Abbas, turning him into the address for finding a solution. We stopped intentionally when we did.

This turns the common perception of the Israeli invasion on its head.   Israel's bombardment- while not undertaken as responsibly as in the past- and its incursion into Hamas-controlled territory were justified, but may not have been wise, from an Israeli (let alone from humanitarian) perspective. Asking whether Jerusalem's actions are "justified," while the standard and seemingly logical question, misses the central issue for the West. It rests on the premise that the action by the Netanyahu government is the most aggressive, and most zealous of Zionist interests, policy that might have been taken.

Considered more closely, however, Netanyahu's approach appears to be one careful not to destroy Hamas and not to empower the more moderate Abbas, whose influence would only grow with the demise of Hamas.   Notwithstanding whatever the Prime Minister's actual motive is, his actions imply a belief that establishment of an independent Palestinian state (which presumably runs through the Palestinian Authority) can be avoided, and that a one-state solution is attainable. They are consistent with his statement in July “I think the Israeli people understand now what I always say: that there cannot be a situation, under any agreement, in which we relinquish security control of the territory west of the River Jordan.”

Evidence suggests Benjamin Netanyahu believes there still can be a Jewish state in the Middle East in the absence of a Palestinian state (aside from, of course, the current Palestinian state of Jordan).   His only problem is not one of morality or justification, but that the rest of the world disagrees.