Can't they just kiss and make up?  Wait, they have- though from the looks of it (below, photo from Getty), neither is comfortable, which is to the credit of each. 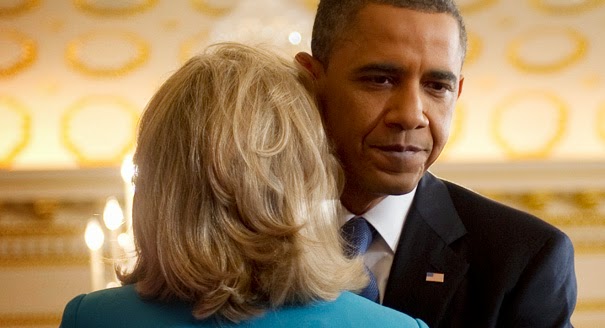 Politico ignores, as Politico does (after all, it's not named "policy-o") the policy and speculates about the politics:

Hillary Clinton called President Barack Obama on Tuesday to “make sure he knows that nothing she said was an attempt to attack him” when she recently discussed her views on foreign policy in an interview with The Atlantic, according to a statement from a Clinton spokesman.

The statement comes amid tension between the Clinton and Obama camps in the wake of the interview. It also comes as Obama and Clinton, his former secretary of state, are due to cross paths at a social gathering Wednesday night in Martha’s Vineyard.

In the interview, Clinton dismissed the Obama administration’s self-described foreign policy principle of “Don’t do stupid stuff.” And while she also praised Obama several times, Clinton nonetheless called his decision not to assist Syrian rebels early on a “failure.”

Was this really necessary? Probably not, when

The statement from Clinton spokesman Nick Merrill noted that although Obama and Clinton have had disagreements, she has discussed these differences publicly before, including in her memoir, “Hard Choices.”

“Secretary Clinton was proud to serve with President Obama, she was proud to be his partner in the project of restoring American leadership and advancing America’s interests and values in a fast changing world,” said the statement, shared with POLITICO. “She continues to share his deep commitment to a smart and principled foreign policy that uses all the tools at our disposal to achieve our goals. Earlier today, the secretary called President Obama to make sure he knows that nothing she said was an attempt to attack him, his policies, or his leadership.

It continued: “Secretary Clinton has at every step of the way touted the significant achievements of his presidency, which she is honored to have been part of as his secretary of state. While they’ve had honest differences on some issues, including aspects of the wicked challenge Syria presents, she has explained those differences in her book and at many points since then. Some are now choosing to hype those differences but they do not eclipse their broad agreement on most issues. Like any two friends who have to deal with the public eye, she looks forward to hugging it out when ... they see each other tomorrow night.”

Hillary Clinton's foreign policy is not President Obama's foreign policy, reduced to "Don't do stupid stuff." In the medical profession, that's referred to as "first, do no harm" and has proven unassailable (albeit slightly contrived) as a motto, though in practice violated regularly. It is unknowable what would have followed if the President had audaciously opted for Clinton's neo-conservative approach rather than his more cautious angle.

Asked whether "we could have built up a moderate Syrian opposition," Clinton first conceded "well, I don't know the answer to that" before adding "I know that the failure to help build up a credible fighting force of the people who were the originators of the protests against Assad... the failure to do that left a big vacuum, which the jihadists have now filled."

By contrast, in an interview with New York Times' columnist Tom Friedman conducted after The Atlantic's interview with Clinton (but made public later), Obama argued

This idea that we could provide some light arms or even more sophisticated arms to what was essentially an opposition made up of former doctors, farmers, pharmacists and so forth, and that they were going to be able to battle not only a well-armed state but also a well-armed state backed by Russia, backed by Iran, a battle-hardened Hezbollah, that was never in the cards.

But there is a more important issue relating to the U.S. government which the media is missing. The former Secretary of State believes there is a reasonable chance the USA could have accurately identified a credible, moderate rebel group(s) but Obama is far more skeptical. In an apparently- but not actually- unrelated story, The Washington Post reports

The decision to arm the Kurds, via a covert channel established by the CIA, was made even as Pentagon officials acknowledged that recent U.S. airstrikes against the militants were acting only as a temporary deterrent and were unlikely to sap their will to fight.

“I in no way want to suggest that we have effectively contained, or that we are somehow breaking, the momentum of the threat,” said Army Lt. Gen. William C. Mayville Jr., the director of operations for the Joint Chiefs of Staff.

American officials have tried to expedite the transfer of arms from the government in Baghdad to Kurdish fighters in the north. But that process has gone slowly, prompting Washington to open a direct pipeline to the Kurds via the CIA, according to two U.S. officials who spoke on the condition of anonymity because the spy agency has not publicly acknowledged the operation. The CIA declined to comment.

A U.S. military official said that the Pentagon and the State Department are discussing other possible ways to deliver weapons to the Kurds through open channels, but that they would need the legal authorization to do so. U.S. arms sales normally are restricted to sovereign or central governments.

In what is probably a good cause, the CIA is sending weapons to another party on a covert basis.  Digby recognizes "that's the CIA for you. It used to be an intelligence service. Now it's a secret army.  But without all those unpleasant military rules.  And it operates with a secret budget. Very convenient."

Perhaps if the Central Intelligence Agency were still an intelligence service instead of a military force, we would know whether in Syria "we could have built up a moderate opposition" or we would have been sending weapons to doctors, farmers, and pharmacists.

So instead of obsessing over the difference between a center-left foreign policy and a center-right orientation, the media might consider two issues that actually matter. A United States Senator, popular with that same media, recklessly asks of the President of the United States "Do you really want to let America be attacked? and little notice is taken.  Little light has been cast also upon why the Central Intelligence Agency is an agency and centralized but at least in the Middle East, apparently delivering relatively little intelligence.