Nobody Here But Us Chickens


Maybe crises bring out the worst in some people. Or perhaps it's only that we wouldn't hear from them were there no crisis.  Interviewed Monday by GOP TV, State Senator Maria Chappelle-Nadal, whose district includes part of Ferguson, Missouri contended

The reason why I used profane language is because he has allowed us to get tear-gassed for three days.I am one of his senators in his party, and he was at the state fair enjoying a country concert while we were getting teargassed and shot at. And yes, anyone who's going to get tear-gassed deserves to say a few f-bombs here and there.

Three of those thoughtful, measured tweets from the state senator included  a)"You don't know shit bc you never communicate. FUCK you, Governor!;" b) "Get on your knees, Governor. Get ready";  c) "FUCK you, Governor. I'm calling your bullshit!"

Admittedly, these all were sent out between 1:30 a.m. and 2:00 a.m. last Thursday, the first preceded by Governor Nixon's incendiary tweet "Situation in Ferguson does not represent who we are. Must keep the peace, while safeguarding rights of citizens and the press"  and the last preceded by the offensive"As Governor, I'm committed to ensuring pain of last weekend's tragedy does not continue to be compounded by this ongoing crisis. "

Twitter brings that sort of thing out in so many people. However,  Ferguson mayor James Knowles did not need Twitter but only MSNBC to deny racial division in his town when he stated "I don't believe that's the case, still. There's not a racial divide in the city of Ferguson."  Asked by Tamron Hall "is that your perspective, or do you believe that is the perspective of African-Americans in your community?" Knowle responded "That is the perspective of all residents in our city, absolutely."

Evidently a frustrated professional pollster, Knowles has polled all 21,000 residents of Ferguson. Impressive, really- almost as impressive as the residents themselves who, if their mayor is correct, see things far differently than Americans generally (poll below from Pew Research Center via Digby's Hullabaloo): 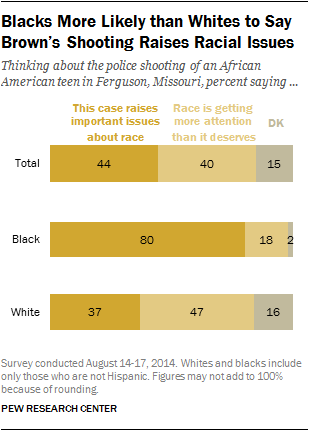 It may be a sign of the apocalypse that we must go the world of sports- Sports!- to get some needed perspective.  Recognizing "The One Percent controls the fate of the Ninety-Nine Percent," NBA Hall of Fame center Kareem Abdul-Jabbar notes

unless we want the Ferguson atrocity to also be swallowed and become nothing more than an intestinal irritant to history, we have to address the situation not just as another act of systemic racism, but as what else it is: class warfare.

By focusing on just the racial aspect, the discussion becomes about whether Michael Brown’s death—or that of the other three unarmed black men who were killed by police in the U.S. within that month—is about discrimination or about police justification. Then we’ll argue about whether there isn’t just as much black-against-white racism in the U.S. as there is white-against-black. (Yes, there is. But, in general, white-against-black economically impacts the future of the black community. Black-against-white has almost no measurable social impact.)

Then we’ll start debating whether or not the police in America are themselves an endangered minority who are also discriminated against based on their color—blue. (Yes, they are. There are many factors to consider before condemning police, including political pressures, inadequate training, and arcane policies.) Then we’ll question whether blacks are more often shot because they more often commit crimes. (In fact, studies show that blacks are targeted more often in some cities, like New York City. It’s difficult to get a bigger national picture because studies are woefully inadequate. The Department of Justice study shows that in the U.S. between 2003 and 2009, among arrest-related deaths there’s very little difference among blacks, whites, or Latinos. However, the study doesn’t tell us how many were unarmed.)

This fist-shaking of everyone’s racial agenda distracts America from the larger issue that the targets of police overreaction are based less on skin color and more on an even worse Ebola-level affliction: being poor. Of course, to many in America, being a person of color is synonymous with being poor, and being poor is synonymous with being a criminal. Ironically, this misperception is true even among the poor.

Abdul-Jabbar recognizes peaceful protests across the nation are

what it will take to evoke actual change. The middle class has to join the poor and whites have to join African-Americans in mass demonstrations, in ousting corrupt politicians, in boycotting exploitative businesses, in passing legislation that promotes economic equality and opportunity, and in punishing those who gamble with our financial future.

Other people, most consistently Thomas Frank, have made the same points.  But it's particularly noteworthy that Abdul-Jabbar makes this argument in the context of strife which has an obvious racial component. While  much of the left promotes the racial factor while the right either exploits or denies its existence, the former Los Angeles Laker keeps it in perspective and sees the wider picture.

Email ThisBlogThis!Share to TwitterShare to FacebookShare to Pinterest
Labels: race