This Is The Story And They're Sticking To It

With the announcement of President Obama's strategy for dismantling ISIL, the time has come to congratulate the President of the United States. So take a bow, John McCain.

proven ferocious about using military force to kill suspected terrorists. In Afghanistan and Pakistan, he’s basically adopted the policy Joe Biden proposed at the start of his administration: Don’t focus on fighting the Taliban on the ground, since they don’t really threaten the United States. Just bomb the hell out al-Qaeda from the air. Compared with George W. Bush, he’s dramatically expanded drone strikes, even though they’re unilateral, legally dubious, and morally disturbing. And as promised, he sent special forces to kill Osama bin Laden without Pakistan’s permission, even though his vice president and secretary of defense feared the risks were too high.

When it comes to the Middle East, in other words, Obama is neither a dove nor a hawk. He’s a fierce minimalist. George W. Bush defined the War on Terror so broadly that in anti-terrorism’s name he spent vast quantities of blood and treasure fighting people who had no capacity or desire to attack the United States. ...

Understanding Obama’s fierce minimalism helps explain the evolution of his policy toward Syria and Iraq. For years, hawks pushed him to bomb Assad and arm Syria’s rebels. They also urged him to keep more U.S. troops in Iraq to stabilize the country and maintain American leverage there. Obama refused because these efforts—which would have cost money and incurred risks—weren’t directly aimed at fighting terrorism. But now that ISIS has developed a safe haven in Iraq and Syria, amassed lots of weapons and money, killed an American journalist, recruited Westerners, and threatened terrorism against the United States, Obama’s gone from dove to hawk. He’s launched air strikes in Iraq and may expand them to Syria. As the Center for American Progress’s Brian Katulis has noted, the Obama administration is also trying to strengthen regional actors who may be able to weaken ISIS. But the administration is doing all this to prevent ISIS from killing Americans, not to put Syria back together again. Yes, there’s a humanitarian overlay to Obama’s anti-ISIS campaign: He’s authorized air strikes to save Yazidis at risk of slaughter. But the core of his military effort in Iraq and Syria, and throughout the greater Middle East, is narrow but aggressive anti-terrorism.

President Obama, Beinart realized, "is doing all this to prevent ISIS from killing Americans, not to put Syria back together again (because) the core of his military effort in Iraq and Syria, and throughout the greater Middle East, is narrow but aggressive anti-terrorism."

That's why Obama, roughly ten days after Beinart's piece ran, announced he wants to conduct air strikes against ISIL; deploy noncombat soldiers to Iraq and increase military assistance; and mobilize the international community to take measures including cutting off funding.

So what is he doing saying this?

A President aware of the limitations of a nation, even a superpower, in a world in which combatants are numerous and dispersed suggests America must attack evil everywhere, to make a million flowers bloom.  Russian aggression against Ukraine, Syrian chemical weapons production, the Ebola virus, Muslim communities around the world- wherever there is a problem, the US can solve it.  If not us, who?

Though few individuals have better enunciated the neocon perspective. one person has done so. In January, 2013, John McCain told President Obama's choice for Defense Secretary, who opposed the surge in Iraq, "I think history has already made a judgment about the surge, sir, and you’re on the wrong side of it."  In October, he and buddy Lindsey Graham wrote

Whatever the Bush administration got wrong about Iraq, it got one very important thing right: The recognition in early 2007 that the conflict needed a different strategy, more troops and other resources, and different military leadership in the country. This strategy, known as "the Surge," helped create the political and security conditions upon which the Iraqi people could build.

More significantly, they added "as the Bush administration left office, Iraq was at long last heading in a more promising direction (but) unfortunately, the Obama administration signaled a very different approach to Iraq when it took office in January 2009."

In June, wrote Kevin Baron, he declared "every hour the options become fewer and fewer as ISIS, the most radical terrorist group alive, sweeps across Iraq."  He called on the President to fire his entire national security team and "criticized Obama for declaring the Iraq war over and withdrawing troops before attaining 'victory.'"

Just a couple of weeks ago, he and his buddy, still convinced Obama snatched defeat from the jaws of victory in Iraq, recommended in an op-ed in The New York Times that the President arm the Syrian rebels and send non-combat soldiers to Iraq and Syria.   "George W. Bush," they wrote, "changed course in Iraq and saved America from defeat."

The "loss of China" refers, in U.S. political discourse, to the Communist Party take over mainland China from the Nationalists in 1949, and therefore the "loss of China to communism." The "loss of China" was portrayed by critics of the Truman Administration as an "avoidable catastrophe." It led to a "rancorous and divisive debate" and the issue was exploited by the Republicans at the polls in 1952.  It also played a large role in the rise of Joseph McCarthy, who, with his allies, sought scapegoats for that "loss," targeting notably Owen Lattimore, an influential scholar of Central Asia.

We laugh- laugh! because Republicans have hurled charges, directly and indirectly, at President Obama because of his origins and refusal to blame Islam for the behavior of Muslims.  But they have taken their toll on the man who once believed the Iraq war was the wrong conflict at the wrong time. Policy makers have become captives of the sunk cost fallacy and decided that the investment already made in the nation of Iraq compels the nation to make a further investment.  As long as a glimmer of hope remains that victory can be snatched from the jaws of defeat, President Obama is determined that he not be the one fingered for "losing Iraq."

It is a sad state of affairs. But given the apparent support for action- action! among lawmakers and policy wonks, it is evidently more acceptable than conceding that our recent history demonstrates that application of military might no longer guarantees success. 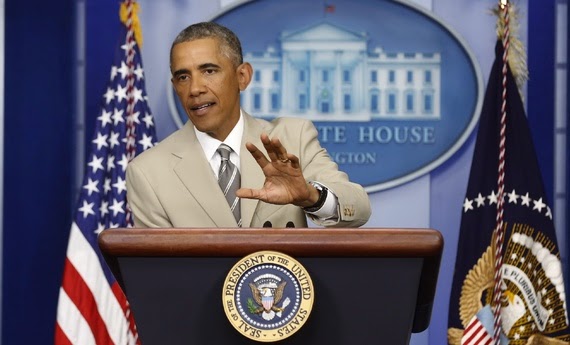