Boldness Must Be In The Eye Of The Beholder


"Bold leadership" is defined by the defenders of the likes of Governor Brownback and New Jersey Governor Chris Christie as exercising the courage of pursuing policies transparently harmful to the voters (i.e., constituents) of the state governed.  That isn't only by the right. In an analysis by the Kansas City Star's Brad Cooper, director of Public Policy Polling Tom Jensen is quoted as asserting "Being a bold leader will come back to bite you if the bold things you do are things that voters don't like."  Cooper summarizes

When the moderate wing of his party stood in the way, Brownback successfully campaigned for conservatives more in step with his political philosophy so he could exert a tighter grip on the statehouse.

Standard & Poor's Ratings cut the credit score for Kansas to AA from AA+ on Wednesday in another blow to the deep income tax cuts championed by Republican Governor Sam Brownback, who is struggling to keep his post in upcoming elections.

In a report explaining the downgrade, S&P said the Kansas budget is not structurally balanced and described a fiscal situation with very little breathing room.

S&P noted Kansas relied on a "substantial drawdown" of its general fund balance in fiscal 2014, which ended in June, to cover a revenue shortfall.

Pandering to voters by cutting their taxes today and drawing down a general fund, courting serious repercussions once the governor leaves office. How bold!

Cooper notes "the Brownback administration’s decision to move Medicaid services for the developmentally disabled into a managed-care program run by private insurers." He does not mention that in upon considering Medicaid expansion (map below from The Advisory Board Company; click here for interactivity ability), the Governor in May, 2013

punted the decision to the Republican-controlled state legislature, which has largely kept the topic under study during a legislative session dominated by the topics of taxes, abortion and guns. With lawmakers reconvening this week, it appears likely that the legislature will further delay a decision on expanding Medicaid by requiring any such expansion be approved by lawmakers.

Brownback is one of three governors not to take a definitive postion on Medicaid.

The legislature later included a provision in the budget "that would require a legislative vote for the state to expand its Medicaid program," according to the Wichita Business Journal.  A year later, there still has been no action. Consequently, Brownback is able to deny that he squelched extension of  health care coverage to needy Kansans while his strategy is well understood by his political benefactors, the Koch brothers.

It is a strategy reminiscent of that of New Jersey Governor Chris Christie, who in June 2013 indicated he was

planning to expand Medicaid eligibility for low-income New Jersey residents, but he doesn’t want the expansion to be backed up by state law.

On Friday, Christie vetoed a bill (S-2644/A-4233) that would have made the expansion he announced in February permanent.

While he didn’t spell out why he vetoed the bill, he said when originally announcing the expansion that if the fiscal and public health benefits ever change “because of adverse actions by the Obama administration, I will end it as quickly as it started"...

The ACA is Obama's baby, his signature legislation.  Any "adverse actions" would be undertaken not by the Administration, but by the House of Representatives, controlled by Christie's own party. But never mind:.while he can't be attacked in the largely liberal state of New Jersey for blocking Medicaid expansion, the governor made sure the right people got the right message, for

Christie’s veto was immediately praised by Mike Proto of Americans for Prosperity, a group that opposed the ACA. Proto suggested that the veto would prevent the expansion, but Christie administration officials have indicated that the expansion will move forward without the legislation.

“This is a win for the taxpayers of the state of New Jersey,” Proto said in a statement. “As AFP has stated time and again, this expansion would have put even greater pressure on an already strapped state budget, and forced more Americans onto a broken healthcare program.

“Americans for Prosperity would like to thank all of those in the Assembly and Senate who realized that Medicaid is bad medicine and voted no on its original passage and once again thanks Gov. Christie for doing the right thing,” the statement added.

There they are, Republican governors posing as "bold leaders" for the mainstream media and giving a whole new meaning to cowardice. 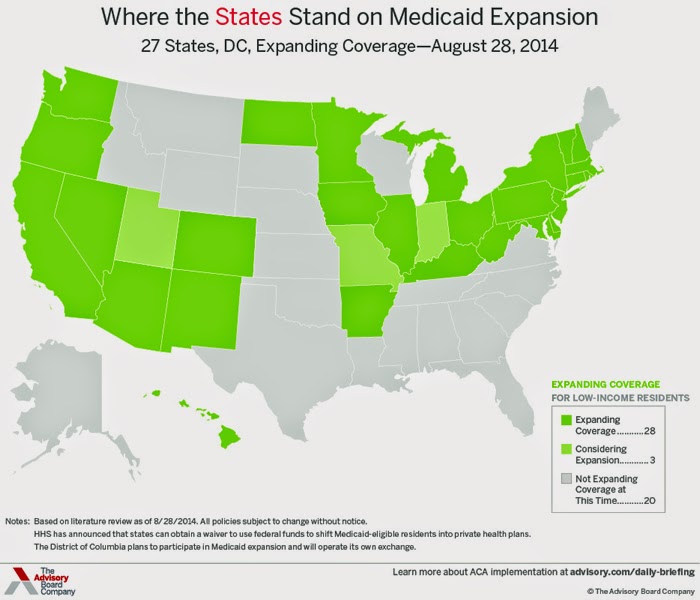