We'll Back Him Up Until We Can Push Him Off The Cliff.

... What was the Islamic State thinking? We know it is sophisticated in its use of modern media. But what was the logic of propagating to the world videos of its beheadings of two Americans (and subsequently a Briton) -- sure to inflame public opinion?

... It was an easily sprung trap to provoke America into entering the Mesopotamian war.

Because they're sure we will lose....

They count on Barack Obama quitting the Iraq/Syria campaign just as he quit Iraq and Libya in 2011 and is in the process of leaving Afghanistan now. And this goes beyond Obama. They see a post-9/11 pattern: America experiences shock and outrage and demands action. Then, seeing no quick resolution, it tires and seeks out leaders who will order the retreat. In Obama, they found the quintessential such leader....

Steve M. does what he does best, skewering conservative columnists, remarking

"The quintessential such leader"! So ISIS has calculated that Obama is a big wuss -- but not quite enough of a big wuss to shrink from the fightaltogether if provoked, just enough to start the fight, get embroiled in it,then quit, just the way he's done in, oh, say, the fight against Al Qaeda, in which ... um ... he's killed the leader and some top subordinates, thus helping to create precisely the competition for the title of Earth's Baddest Jihadist Group that ISIS is currently trying to win.

Oh, and Obama is so uniquely and predictably feckless that ISIS can count on him not to give in to pressure to widen the war, and to cut and run before another U.S. president (maybe even a Republican!) can fight ISIS more effectively (because who could possibly fight ISIS lesseffectively?). It just isn't possible, according to ISIS, that Obama will hold the line, or even score some victories, then hand the war off to an able successor, even though he'll be president for only two more years. ISIS is counting on Obama to pursue the fight to exactly the extent that maximizes ISIS's glory, and then to withdraw exactly when the fight can't be rapidly escalated by whoever succeeds him, all because Obama is such a uniquely terrible American leader.

Why, it almost seems as if ISIS thinks exactly the way Charles Krauthammer and his Fox News buddies think. Odd how that works.

Shortly before Obama took office, President Bush negotiated with Iraq a Status of Forces Agreement which would have had all American soldiers out of Iraq by the end of 2011. His successor wanted to keep a small residual force, but that fell through when Baghdad refused Obama's condition that American soldiers be given immunity from prosecution. But the right simply can't (or refuses to) get its arms around the idea that the Iraq War had not been won before Barack Obama lost the war and became The Great Appeaser.

Still, sixteen paragraphs through the seventeen paragraph column, one is surprised that the ever-hawkish Krauthammer apparently opposes further U.S. military action.   He refuses to join the GOP "they're coming to get us chorus," noting

the Islamic State’s principal fight is intramural. It seeks to supersede and supplant its jihadi rivals — from al-Qaeda in Pakistan, to Jabhat al-Nusra in Syria, to the various franchises throughout North Africa — to emerge as champion of the one true jihad.

He realizes even "The strategy is simple: Draw in the world’s great superpower, create the ultimate foil and thus instantly achieve supreme stature in radical Islam as America’s nemesis."

He maintains "Obama's 'broad coalition' remains a fantasy" because

It’s more a coalition of the unwilling. Turkey denied us the use of its air bases. The Sunni Arab states are reluctant to do anything militarily significant. And not a single country has volunteered combat troops. Hardly a surprise, given that Obama has repeatedly ruled that out for the U.S. itself.

He might have added that even Iraq premier Haidar al-Abidi, a Shiite Muslim who would be pleased if the Sunni ISIL were eliminated, is lukewarm about the coalition.  Al-Abidi had definitively ruled out American soldiers and asserts "The only contribution the American forces or the international coalition is going to help us with is from the sky.   We are not giving any blank check to the international coalition to hit any target in Iraq."

But by the end, Krauthammer goes off the rails, remarking

Testifying on Wednesday to the Senate, Kerry declared that the Islamic State “must be defeated. Period. End of story.” Not the most wisely crafted of declarations: The punctuational emphasis carries unfortunate echoes of Obama’s promise about health care plans and the word “must” carries similar echoes of Obama’s assertions that Bashar al-Assad had to go.

So John Kerry is unwise, even a fool.  Barack Obama is incompetent and a dissembler.  But- wait for it- we have to support their policy.  Even then, in contrast to nearly his entire argument, Krauthammer cannot bring himself to opposing, or even expressing ambivalence about, the Administration's plan. He  concludes- even as he takes a shot at the President-

Nonetheless, Kerry’s statement remains true for strategic and even moral reasons. But especially because when the enemy deliberately draws you into combat, it is all the more imperative to show the world that he made a big mistake.

The problem is not only that Krauthammer and his Fox News buddies think as ISIL thinks.  It is also, as Steve M. clearly understands, that the GOP will not give credit to President Obama even when they agree with his policy.

Speaking out of turn, Republican Representative Jack Kingston of Georgia (who has wanted a vote to authorize military action; photograph from the AP) captured the essence of his Party's desire to have it both ways when he admitted

A lot of people would like to stay on the sideline and say, 'Just bomb the place and tell us about it later.'   It’s an election year. A lot of Democrats don’t know how it would play in their party, and Republicans don’t want to change anything. We like the path we’re on now. We can denounce it if it goes bad, and praise it if it goes well and ask what took him so long. 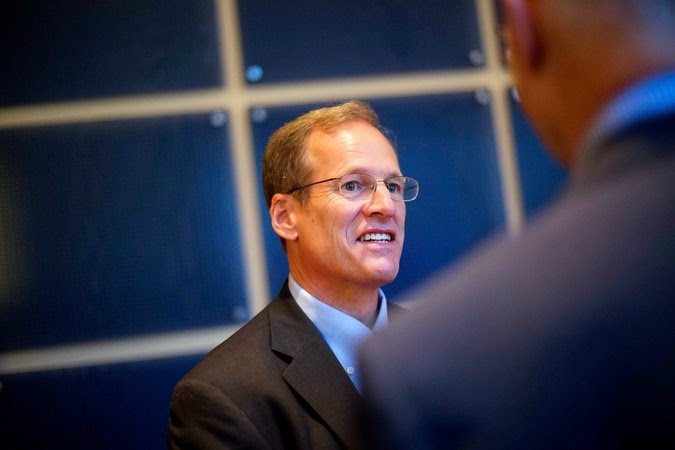 There is insufficient profile in courage in either party but especially in the GOP, annoyed Obama has refused to employ triumphalist rhetoric.  They so badly want a war from a President who gained office partly by pledging to wind down the Iraq debacle. "See, I told you so" can be emotionally gratifying. They won't oppose the war, but won't give Obama credit, either, an easy transition (or no transition at all) for a Party which decided to obstruct the President and his agenda before he even took office.