Then Find Out What Being Under The Bus Really Means.

It was on June 27, 2013 that the United States Senate passed by a 68 to 32 count sweeping comprehensive immigration reform.  Fourteen Republicans voted for the bill while 34 voted against it.  The Senate's two Independents, both of whom caucus with the Democrats, voted for the bill, as did every Democrat.

But how soon they forget.   Carmen Velasquez is the daughter of a Mexican immigrant, a Chicago businesswoman and community activist and founder and retired executive director of Alivo Medical Center in Chicago.  She writes in Politico

Lie to me five times, what do you expect us to do? Obama and the Democrats who supported and encouraged him have little credibility among Latino voters. Obama may have done more to suppress the Latino vote through broken promises than any hostile action taken by the Republicans.

Last weekend, Obama backed off his most recent promise to push immigration reform through executive action to protect vulnerable Senate Democrats who would otherwise come under fire during the upcoming midterms. But by trying to shield those lawmakers, he may have harmed others.

She then cites five Democratic officeholders, two U.S. Representatives, a U.S. Senator, and a Governor "who have kept their promises to the Latino community and consistently supported reform" but threatens

maybe Latinos in places like Colorado, Florida, Arkansas and North Carolina — states with closely contested Senate or governor’s races — should sit this election out. Maybe only by paying a price at the polls will Democrats finally stop throwing us under the bus.

Notwithstanding Velasquez's frustration with Democrats, most in that Party are still at it, pushing legislation Velasquez presumably would applaud.  In late June, we read in Politico

Senate Democrats are actively warning they may try to attach the Gang of Eight’s comprehensive immigration reform bill to the package if House Republicans pass a pared-down funding bill for the border crisis.

The complicated calculus reflects the fact that the Senate’s own $3.57 billion border supplemental legislation appears unlikely to clear a procedural vote on Wednesday. So if the House is able to pass its $659 million package later this week, Senate Democrats may press to attach their sweeping 2013 immigration reform bill to the House’s legislation.

“If they pass that, maybe it’s an opening for us to have a conference on our comprehensive immigration reform, if they’re finally sending us something on immigration,” Senate Majority Leader Harry Reid (D-Nev.) told reporters.

Speaker John Boehner (R-Ohio) fired back Tuesday afternoon, stressing that any attempt from Senate Democrats to jam the House with the upper chamber’s immigration reform bill “in any fashion” will be rejected in the Republican-led House. In a sternly-worded statement, Boehner called Reid’s move “deceitful and cynical.”

“Such measures have no place in the effort to solve this crisis,” Boehner said. “And any attempt to exploit this crisis by adding such measures will run into a brick wall in the People’s House.”

Latinos in places like Colorado, Florida, Arkansas and North Carolina (which places are like those states?) have been sitting out mid-term elections, which has helped explain why Democrats lost House seats in 2012 while winning more votes across the nation than did Republicans (gerrymandering, too, obviously).  Slate's Dave Weigel notes

Latino turnout always, always lags turnout from other ethnic groups. You could see that last month in Arizona, where the safe, blue, majority Latino 8th district saw only around 25,000 voters turn out in a competitive primary between Latino candidates. To the south, in the more evenly divided 2nd district, more than 58,000 voters turned out for a less competitive Republican primary.

It's hardly likely that sitting out the U.S. Senate race in Arkansas would be the deciding factor in the race being run by Senator David Pryor (who has urged Obama to delay any Executive Order on immigration until Election Day), given that there are very Hispanics in Arkansas. If there is diminished turnout among Hispanics across the board, it likely would harm primarily those Democrats who have been most supportive of comprehensive immigration reform (as contrasted with those who have mildly supported it) because those Democrats are concentrated in the districts and states with the greatest concentration of Latinos.  If low turnout among Hispanics is decisive anywhere this November, it might be in Colorado, where Senator Udall has been an outspoken advocate of reform.

That might please Velasquez or Dream Action Coalition director Cesar Vargas who, similarly peeved at Obama's failure to fulfill perceived promises, comments "We know where Republicans stand, and what this shows now is that Democrats are also willing to throw Latinos and immigrants under the bus."

Actually, that would more accurately be "Barack Obama" rather than "Democrats."  Boycott this year's election and (for the most part), sympathetic Democrats suffer and Barack Obama, who is not on the ballot, walks. Boycott this year's election and the likes of Velasquez and Vargas might discover that while Democrats might be willing to throw immigrants figuratively under the bus, for many Republicans it might not be figurative (photo below, from US News, of Murrieta, California, 7/1/24) 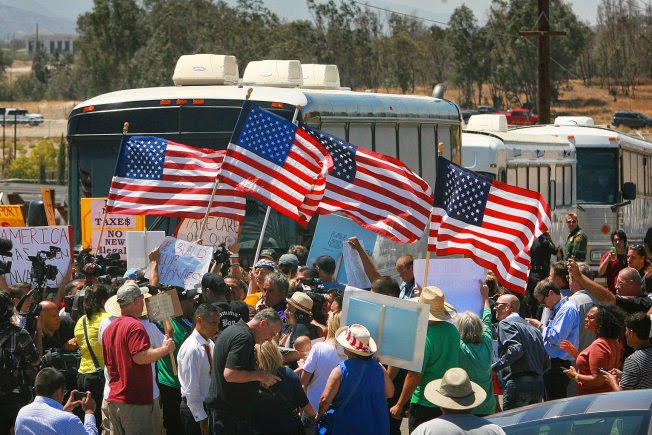