Or Was It A Double Latte?


It appears to have begun with the gosh-darned liberal media, when ABC News at 2:19 p.m. on Tuesday reported

Some are calling it the “latte salute.”

When President Obama stepped off Marine One at the Wall Street landing zone in New York City, en route the United Nations, he saluted two Marines at the bottom of the stairs as he held a coffee cup in the same hand.

Presumably, after the President on Wednesday "charted a muscular new course for the United States in a turbulent world" in a speech to the U.N.'s General Assembly, ABC covered the substance of the President's remarks on the third war the USA will be fighting in Middle East in the past dozen years. But on Tuesday, this "liberal" media outlet proceeded to cite three (anonymous) Instagram users (only), none of whom called it the "latte salute." The Washington Post, in maintaining "it was quickly dubbed the latte salute," linked to the ABC article.

Two hours after the ABC piece, Fox News contributor and former Florida Representative Allan West tweeted "if  there was ever any doubt as 2 the level of regard Obama holds for our military, this latte salute seals the deal."

That evening, Karl Rove at least got the drink right after Sean Hannity asked (video below) "did you see the latte salute?" He contended

Look, he knows there are going to be two Marines at the bottom of Marine One when he gets off, and the idea that I’m going to just jaunt out there with my chai tea, and give them the old … you know it’s not a latte salute, it’s a chai salute, because he drinks chai tea, but I mean please, how disrespectful was that?

The real problem, however, was described by columnist Garry Wills, who never has claimed to be psychic, but could now. Seven or eight years ago, righteously annoyed about abuse of "commander-in-chief," he wrote

We are reminded, for instance, of the expanded commander in chief status every time a modern president gets off the White House helicopter and returns the salute of marines.

That is an innovation that was begun by Ronald Reagan. Dwight Eisenhower, a real general, knew that the salute is for the uniform, and as president he was not wearing one. An exchange of salutes was out of order. (George Bush came as close as he could to wearing a uniform while president when he landed on the telegenic aircraft carrier in an Air Force flight jacket).

Reference to Bush 43 has been made many times this week (still not often enough) and you've probably seen this awesome display of respect a few times: 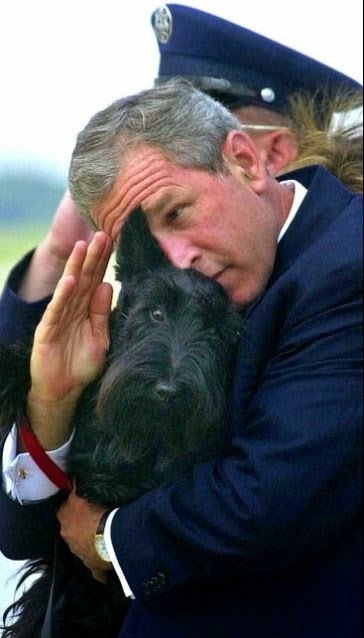 President Bush didn't get criticized much at the time (not now, either). Aside from the obvious reasons (in order of ascending importance)- he's black, currently unpopular, and a Democrat- Obama has gotten so much flak, there is an additional factor, presaged by Wills.   Brian Adam Jones of the blog Task and Purpose quotes Rachel Maddow in her 2011 book Drift recalling

Soldiers were supposed to salute their president; the president was not supposed to salute the soldiers. No modern president, not even old General Eisenhower, had saluted military personnel. It might even be, well, sort of, improper. Reagan seemed disappointed at this news. John Kline suggested he talk to the commandant of the United States Marine Corps and get his advice, and the commandant’s advice ran something like this: You’re the goddamn president. You can salute whoever you goddamn well please. So Ronald Reagan continued saluting his soldiers, and he encouraged his own vice president and successor, George H.W. Bush, to do the same. And every president since has followed.

(Jones believes Kline, then a Marine officer and now a Repub member of the lower chamber, wanted Reagan to stop saluting, thus rendering his suggestion the President ask the commandant of the Marine Corps rather odd. Imagine: "No, Mr. President, we're angry you've been saluting us." Coincidentally, Bill Maher recently selected Kline as the target for his "flip a district" campaign.)

So we can attribute the practice of a President saluting the soldiers to Ronald(6) Wilson(6) Reagan(6) or, as he is viewed by the GOP. Saint Ronnie. Obama, with his latte, chai, Maxwell House, or I really shouldn't be doing this anyway salute, has failed to uphold the noble practice inaugurated by the Man Who Could Do No Wrong. And that is an even greater sin, in their eyes, than being born black.