A President Who Goes Both Ways

was intent on explaining how worsening economic conditions in recent decades produce the desperation seen in the streets of Baltimore, lamenting “impoverished communities that have been stripped away of opportunity, where children are born into abject poverty…communities where there’s no investment, and manufacturing has been stripped away.”

Psssst. You’re supposed to be selling a trade deal, Mr. President! You probably shouldn’t talk about how all the jobs went away, and made every American inner-city a post-industrial tinderbox, when you’re trying to ink a deal with countries with minimum wages of around 75 to 90 cents an hour.

None dare call it hypocrisy but it is cognitive dissonance, something President Obama seems quite comfortable with. In Camden, NJ to highlight a considerable drop in the crime rate in that beleagured city

The White House on Monday announced that bayonets, weaponized vehicles and grenade launchers will no longer be available to local police and that other equipment such as riot gear and other types of armored vehicles would be subject to a more onerous approval process.

Police departments still would be able to procure such equipment, but they would have to buy it privately from sources.  Additionally, other items still would be available through the largesse of the federal government.

No amount of complaining by the Federation of Police can obscure the impact of such military hardware in hardening barriers between police and community. As Obama stated in Camden, "It can alienate and intimidate local residents and send the wrong message. So we're going to prohibit some equipment made for the battlefield that is not appropriate for local police departments."

Back as far as September, in the wake of the shooting death of an unarmed young black man in Ferguson, Mo.- but before black men were killed by law enforcement in controversial situations in Cleveland, North Charleston, S.C., and Tulsa- the President recognized the "gulf of mistrust" between residents and police in many poor black neighborhoods.

Presumably, then, he knows, just as he knew in December, 2013 "A more competitive world lets companies ship jobs anywhere.  And as good manufacturing jobs automated or headed offshore, workers lost their leverage, jobs paid less and offered fewer benefits." But just as he virtually disregards lost American jobs while he pimps for fast track authority and devastating trade deals, on Monday he

called Camden "a symbol of promise for the nation" Monday as he lauded police there for building relationships with residents, and announced federal initiatives to improve trust between police and communities nationwide.

"Camden and its people still face some very big challenges," Obama told an invitation-only audience of at least 150 people at the Salvation Army's Ray and Joan Kroc Corps Community Center. "But this city is onto something."

Oh, yes- it's onto something, all right.  The day after the visit, the Philadelphia Inquirer noted

Critics such as the ACLU say the record has blemishes- officers using excessive force and making unjustified stops. Last year, police in Camden drew the most excessive-force complaints in New Jersey. Tickets issued for petty offenses, such as loitering and driving with broken taillights, have also risen to the highest level in years, jarring some residents, who question the need for such stops."

The county police force (photo below from Inquirer Staff Photographer Andrew Renneisen) in Camden, formed in 2013 at the insistence of the two most powerful politicians (in whichever order) in New Jersey- Governor Chris Christie (Obama's favorite Republican) and wealthy insurance executive and Democratic boss George Norcross- surely is on to something.  The day before Obama graced the city with his presence, the Inquirer reported

Nearly 120 officers - including large swaths of recruiting classes - have resigned or retired, making the department's turnover one of the highest in the state....

An analysis of the resignations shows that the average tenure of the officers who left was less than a year.

In Paterson, N.J., with a department of similar size to Camden, 15 officers resigned in the last two years. The Jersey City, N.J., department, double the size of Camden, says it had two. Atlantic City's department says it had none....

Police officials outside the city say that high turnover can make a department prone to mistakes, and that it limits the ability of officers to connect with residents. 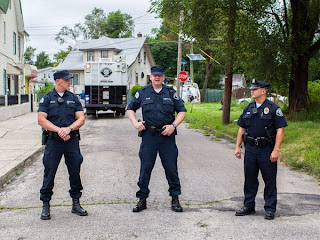 Those turnover figures are, as the professionals would put it, "statistically significant." It is, admittedly, also statistically significant that the number of homicides in Camden dropped from 67 in 2012 to 33 in 2014.  However, the figures of 2014 are compared to those in the year (2014) in which the (municipal) police force was devastated in order to make way for the county force, to the greater glory of Mr. Christie and (especially) Mr.Norcross, the latter the most famous figure and, by leaps and bounds, the undisputed power broker in Camden County, in which the city lies.

Camden is onto something. However, the President who has referred to the "oppressive hand of the government," neatly glided over the increase in personnel. When the announcement was made that the department would be torched, the number of police officers stood at 270, and at 200 when the changeover was made on May 1, 2003. Two years later, the size of the force had dramatically risen to 395,

The primary reason for the decline in crime, as well as of drug users and sellers milling about the streets of Camden, is the increase in the number of police officers. The mere presence of cops, as well as the increase in foot patrols it makes possible, very likely has had a major impact.

But try telling that to a President who has never been bothered by the decline in non-defense federal government employees during his term in office and who laments the loss of manufacturing jobs nationally while he vigorously promotes job-killing trade deals. Try telling that to a President who really, really, seems sincere about police-community relations while vociferously praising a police force whose "broken windows" approach has taken a toll on the residents it serves and protects. You will be speaking to a President who generally believes approximately half of what he says.