It's never hopeful to read something as silly as "Kimberly Strassel may think it's all about Elizabeth Warren, but Warren is following in Hillary's footsteps, again with the benefit of 20/20 hindsight with regard to the banks."

Although it's difficult to determine what (except to take a shot at the Wall Street Journal's Strassel, which always is a good thing) what karoli of Crooks and Liars is trying to say, she appears to be arguing that Mrs. Clinton is a trailblazer and Senator Warren is crashing her party.

But Elizabeth Warren is not running for President. And it is shortsighted to trivialize the contributions of Shirley Chisholm in 1972 and of Geraldine Ferraro in 1984, both of whom were candidates when it was an actual disadvantage to being a woman when running for office.

Karoli effuses of the New Yorker "As Senator, she was able to step out of that role and into her own, which was quite clearly defined as one that was populist."   But as as David Sirota wrote last August, Elizabeth Warren has in the past

slammed Clinton for casting a Senate vote in 2001 for a bankruptcy bill that ultimately passed in 2005. That legislation makes it more difficult for credit card customers to renegotiate their debts, even as it allows the wealthy to protect their second homes and yachts from creditors. According to a 2009 study by the Federal Reserve Bank of New York, the bankruptcy bill’s provisions changing debt payback provisions played a central role in the foreclosure crisis, as the new law forced homeowners to pay off credit card debts before paying their mortgage.

“As first lady, Mrs. Clinton had been persuaded that the bill was bad for families, and she was willing to fight for her beliefs,” Warren wrote. “As New York’s newest senator, however, it seems that Hillary Clinton could not afford such a principled position. … The bill was essentially the same, but Hillary Rodham Clinton was not.”

Additionally, Warren has been a critic of so-called free trade deals, which create regulatory protections for patents and copyrights, but remove such protections for workers, consumers and the environment. Clinton, by contrast, was a key backer of NAFTA and voted for various free trade pacts during her Senate tenure.

Annoyed that on Sunday's panel discussion the host of Meet The Press contrasted Hillary Clinton's remarks on crime with the policy of then-President Bill Clinton, karoli remarked

"You know, it was interesting this week to watch Hillary Clinton backtrack from a Bill Clinton policy on crime," Todd observed.

Because the wimmens always walk in lockstep with their husbands, dontcha know? Todd went on to observe that he was old enough to remember when Martin O'Malley, who also endorsed Bill Clinton's crime policy, was a DLC Democrat and not a populist outlier.

If Chuck Todd had not questioned the apparent ideological divergence between the presumptive 2016 Democratic presidential nominee and the last Democratic president to have implemented a wide-reaching anti-crime policy, he would have committed journalistic malfeasance. Karoli links to a post by C&L proprietor Susie Madrak in which the latter explains Clinton 42

created incentives to individual states to build more prisons, to put more people behind bars and to keep them there for longer. His also presided over the introduction of a federal three-strikes law that brought in long sentences for habitual offenders.

Under “truth in sentencing”, states which sentenced people to long terms in prison with no chance of parole were rewarded with increased federal funds. The crime bill also enshrined a Clinton program known as COPS – Community Oriented Policing Services – in which federal money was provided to states to allow them vastly to increase the number of police officers on the streets – in turn generating more arrests and more convictions.

But although Madrak approvingly notes WJC now questions our relatively punitive penal policies of the past two decades, she concedes- dontcha know?-

In a foreword to a new book of essays compiled by the Brennan Center for Justice, Clinton stops short of giving a full mea culpa for the vast increase in prison numbers. He writes that by 1994 crime had become a major problem across the country and that “we acted to address a genuine national crisis."

Further, Hillary Clinton (thus far) has been very lucky, as Karoli would realize if she took off her rose-colored Hillary glasses.  The former Senator could be pressed on the policies of her husband which helped precipitate the great financial crisis of '08.   They included the Gramm-Leach-Bliley Act of 1999 which repealed the Glass-Steagle-Act and the Commodity Futures Modernization Act, which "prevented the Commodity Futures Trading Commission from regulating most over-the-counter derivative contracts, including credit default swaps."

Additionally, in the first three months of 2015 alone, nine new restrictions on abortion rights have been enacted (map below from the Guttmacher Institute)- and only one of  these actually makes abortion illegal (after 20 weeks, in West Virginia). The others, geared toward making abortion rare by putting up roadblocks to a woman obtaining the procedure, are completely consistent with the misguided statement of presidential candidate Bill Clinton that "abortion should be safe, legal, and rare." 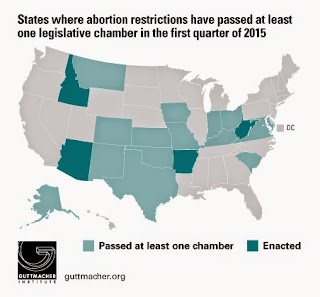 All presidential candidates should be asked whether abortion should be "safe, legal, and rare" or an option for women, whether Glass-Steagall should be reinstated, and if the specific crime policies- including putting more police on the street- instituted by President Bill Clinton should be reversed. But Mrs. Clinton alone is the wife of Bill Clinton, and it could be awkward to explain away her husband's policies. If she is confronted with nothing more daunting than being reminded that she has "backtrack(ed) from a Bill Clinton policy on crime," she has hit the lottery.