On April 27, Robert Borosage of the Campaign for America's Future wrote

Will Hillary Clinton oppose the Trans-Pacific Partnership (TPP) agreement and the fast track authority designed to ramrod it through the Congress? She’s been noncommittal to date, with many assuming she will eventually support the president who she served as secretary of state. But by calling out his opponents, President Obama has turned the escalating battle over fast track and TPP into an intra-party back-alley knife fight. As someone seeking to lead that party, Hillary can’t remain on the sidelines for long. And, if she adheres to the standards that she put forth for the agreement, she might well end up joining the opposition.

Senate Majority Leader Mitch McConnell has scheduled the voting process for trade promotion authority, commonly known as “fast track,” to begin as early as Tuesday. If passed, fast track prohibits the Congress from amending trade agreements no matter what problems might show up, requires these agreements to be voted on within 90 days, limits the debate Congress is allowed and prohibits filibusters.

"Hillary can't remain on the sidelines for long," Borosage complained, but she has exceeded our expectations. Two days before the pivotal vote- on fast track- Mrs. Clinton (photo from Lucas Jackson/Reuters) is nowhere to be found.

She has done her best to avoid the issue. Asked in April about the Trans-Pacific Partnership, Clinton cryptically remarked "Any trade deal has to produce jobs and raise wages and increase prosperity and protect our security. We have to do our part in making sure we have the capabilities and the skills to be competitive." (This stands in contrast with candidates publicly opposed to jobs, prosperity, national security, and competitiveness.)

Cynically, the thought arises that Mrs. Clinton is playing a very cynical game. With Bernie Sanders raising enough money that he may get the media attention necessary to challenge the front runner on issues of economic justice, it's unlikely HRC eventually will come out in support of the Trans-Pacific Partnership.  Yet, her silence is facilitating passage of fast track authority, which would make heading off approval of the TPP a truly formidable task.

Whatever she believes about the trade deal itself, Clinton likely wants the President of the United States to have the authority to present such agreements for up-or-down approval to the United States Congress.  She wants, and probably expects, to be the next President herself and is, in a way, in a similar situation to that of Barack Obama on torture in the Bush Administration.

Obama seems to have been always opposed to torture. But as President he not only has refused to prosecute members of the prior Administration for the regime illegal under both international and U.S. law. Further, as Jonathan Turley  pointed out in 2010,  the current Administration "worked hard behind the scenes not only to prevent any investigation of torture in the United States but shutdown efforts abroad to enforce the Geneva Conventions and the Convention Against Torture. This includes threatening the Spanish that, if they did not derail a judicial investigation, it would have serious consequences in bilateral relations."

Of course it did. Protect the prior President, and future Presidents will protect you, or at least be stymied because there is little precedence in going after past occupants of the Oval Office.  If Barack Obama gets his way on bargaining away U.S. sovereignty to multinational corporations, it will set a precedent and make it easier for his successor to do the same without a whimper from the United States Congress.

So where is Hillary?  She is in hiding, where her interests lie. 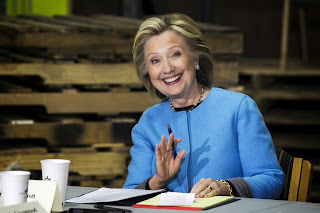