Clinton signed into law an omnibus crime bill in 1994 that included the federal "three strikes" provision, mandating life sentences for criminals convicted of a violent felony after two or more prior convictions, including drug crimes. On Wednesday, Clinton acknowledged that policy's role in over-incarceration in an interview with CNN's Christiane Amanpour.

"The problem is the way it was written and implemented is we cast too wide a net and we had too many people in prison," Clinton said Wednesday. "And we wound up...putting so many people in prison that there wasn't enough money left to educate them, train them for new jobs and increase the chances when they came out so they could live productive lives."

Clinton's comments come on the heels of protests in Baltimore over policing and the death of a young black man there and a week after Hillary Clinton delivered one of the first policy addressees of her presidential campaign on criminal justice reform, saying that the system focuses too much on incarceration.

The problem wasn't that putting people in prison left insufficient money to educate and train them for new jobs.  There money always was there; what was lacking was will, with Clinton having a fetish for balancing the budget and the GOP (as usual) uninterested in spending on human capital. Combine that with the job-killing NAFTA, Clinton would have had us train and educate individuals for jobs which no longer existed or, with the tech boom were relatively-low paying and offered few benefits.

Of course, the President did balance the budget, largely with a bold, huge tax increase in 1993, for which he apologized to a wealthy group of contributors in 1995. Soon afterward, he reversed himself- sort of- stating "If I said anything which implies that I think we didn't do what we should have done, given the choices we faced at that time, I shouldn't have said that," which (roughly translated) means "Ohmigosh, that didn't sound right!"

Then there was the time, in July of 1993, that President Clinton signed the bill- which he cited as "a major step forward"-  establishing the "don't ask, don't tell" policy for gays in the military.  In 2010, he told Katie Couric that he regretted generating DADT, though he added "keep in mind, I didn't choose this policy."   Similarly, in 2013, he wrote that he had come to believe the Defense of Marriage Act, which he signed in in 1996, is unconstitutional, though he argued it was a response to the likelihood of more draconian initiatives, perhaps including even a constitutional amendment to ban same-sex marriage.

The former President has not stated that he regrets a 1998 bombing raid in Sudan, ordered partly in retaliation for bombing of three U.S. embassies. The target is now commonly believed to have been merely a pharmaceutical factory, which at the time US intelligence believed was involved with both the processing of a nerve agent and Al-Qaeda. Three years after the event, The Guardian reported the facility was

one of only three medium-sized pharmaceutical factories in Sudan, and the only one producing TB drugs - for more than 100,000 patients, at about £1 a month. Costlier imported versions are not an option for most of them - or for their husbands, wives and children, who will have been infected since. Al-Shifa was also the only factory making veterinary drugs in this vast, mostly pastoralist, country. Its speciality was drugs to kill the parasites which pass from herds to herders, one of Sudan's principal causes of infant mortality.

Although  it would be helpful- and far more meaningful- were the former president to acknowledge his role in the financial calamity the nation has mostly (though not fully; graph from Pew Research Center) climbed its way out of.   that's probably asking too much. However, Clinton's flexibility and willingness to call into question some past actions bespeak an awareness of self or of reality that is lacking elsewhere. 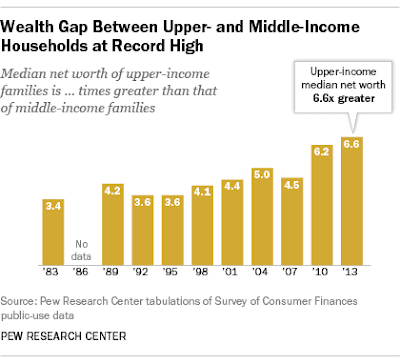 At least President Clinton's  decision on Al-Shifa did not unleash the forces turned against Middle Eastern nations and the West as did the invasion in 2003 ordered by President George W. Bush.  That has not, however, deterred one of  the three major GOP presidential candidates who, one can hope, is gradually being unmasked as a right-wing extremist.  We now learn

After spending months distancing himself from his family’s political legacy, Jeb Bush surprised a group of Manhattan financiers this week by naming his brother, former president George W. Bush, as his most influential counselor on U.S.-Israel policy.

“If you want to know who I listen to for advice, it’s him,” Bush said Tuesday, speaking to a crowd of high-powered investors at the Metropolitan Club, according to four people present. The Republicans in the room spoke on the condition of anonymity to divulge information about the private meeting.

Strategically, it's probably a smart move. Steve M. believes "Republican voters want a candidate who'll say things that please conservatives and make non-conservatives furious. Jeb just did that -- furtively." However, that probably is mere "gravy" to the main dish, that of pleasing mega-billionaire Repub donor Sheldon Adelson, who loves Israel almost as much as he hates unions, and couldn't have been pleased to find that the candidate had considered former Secretary of State James Baker (of "f_ _ _ the Jews" notoriety) a foreign policy adviser.

John Ellis Bush might have been content with "I love my brother and served well the country he loves so much."  Obviously, the second part of those three claims would have been untrue, but everyone would have understood and given him a pass.  It's one thing to have made the mistakes President 43 made but adding him as part of your foreign policy team is fairly contemptuous, suggesting the third Bush believes the American electorate will swallow just about anything.