We Mustn't Offend Anyone

Salon's Jenny Kutner recognizes a double standard as she explains

Nine people have died after a shootout between rival motorcycle gangs in Waco on Sunday, when gunfire erupted in the parking lot of a Twin Peaks restaurant in the central Texas city.

I use the terms “shootout” and “gunfire erupted” after reading numerous eyewitness reports, local news coverage and national stories about the “incident,” which has been described with a whole host of phrases already. None, however, are quite as familiar as another term that’s been used to describe similarly chaotic events in the news of late: “Riot.”

Of course, the deadly shootout in Texas was exactly that: A shootout. The rival gangs were not engaged in a demonstration or protest and they were predominantly white, which means that — despite the fact that dozens of people engaged in acts of obscene violence — they did not “riot,” as far as much of the media is concerned. “Riots” are reserved for communities of color in protest, whether they organize violently or not, and the “thuggishness” of those involved is debatable. That doesn’t seem to be the case in Texas.

A riot is not simply a demonstration against police brutality. It can also be what happens when scores of hostile white people open gunfire in a parking lot. And when that happens, it can be described as anything but a “riot.”

When news outlets use terms such as chaos, melee, fracas, and (my favorite) brouhaha, they're probably reporting on a riot.

This has happened previously. Confirming what I always have suspected, that Beach Boys music can lead to no good, in July of 2013

A violent crowd raged through Huntington Beach on Sunday night after a surfing competition, clashing with police, toppling portable toilets, brawling in the streets and vandalizing and looting at least one business, according to police and witnesses.

There was some mention of "riots" in this NBC Los Angeles story but all in most media reports, far less emphasis on the "commotion" as a riot than we encountered in Baltimore. Additionally, "white-on-white crime" is rarely heard.

But Kutner errs in implying that the differential treatment is due entirely to race.  During the Baltimore riots, there was little or no mention that it was a "race riot." And a race riot it was- black and (mostly) young people, aggrieved at the lack of jobs, mistreatment by police, poverty, and a whole range of problems exacerbated by racial hostility and/or discrimination erupted in a few nights of violence, tempered by heroic efforts by community leaders to restore order.

"Black lives matter," some protesters emphasized (photo below from The Independent of the U.K.), in what sometimes seems wishful thinking.  All across America, aggrieved black communities suffer in silence but when violence of the sort witnessed in Baltimore breaks out, it does no good to deny its (partially) racial basis of (sorry, Ben Carson).

The double standard is a problem. But so too is an emphasis on euphemism, whether to spare feelings, to avoid triggering a scathing response, or as merely an effort to "move on," to get beyond semantics.  But if as Camus noted, crushing truths perish from being acknowledged, causes are ignored, solutions missed, and the truth goes unspoken when we distort the English language or shun clear speaking for political ends 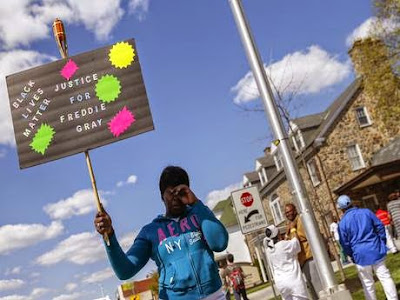