Hillary Clinton was right about two things she stated on her crime speech on Wednesday, May 6. She stated "Let's take on the broader inequities in our society. You can't separate out the unrest we see in the streets from the cycles of  poverty and despair that hollow out those neighborhoods."

She admitted also "I don't know all the answers."

Mrs. Clinton doesn't only not know all the answers. She also plays a little fast and loose with the facts. The former Senator maintained "Women—white women without high school education—are losing life expectancy. Black men and black women are seeing their life expectancy goes down in so many parts of our country" (graphs of life expectancy, white and black men and women; and of causes of death, off-point, both from National Vital Statistics System) 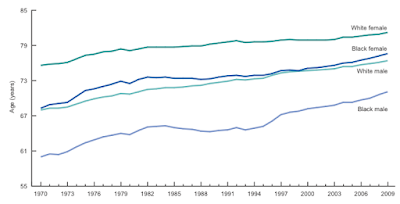 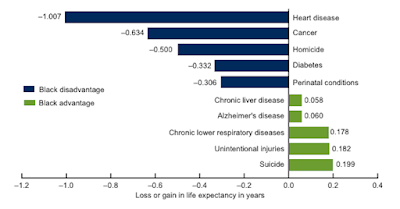 While life expectancy of white women without a high school education has declined precipitously, the life span of white men without a high school diploma also has dropped significantly. Further, the overall increase in the lifespan of black Americans, both female and male, has increased more than that of white Americans. Clinton's reference to education is helpful; that to race, much less so. In 2003 Alex Henderson found it "troubling"

For those keeping score at home, McDowell County is 89.1% white and 9.5% black/African-American. Tunica County is predominately black- but its annual per capita income in 2010 was $11,978 when yearly per capita income nationally was $39,791.  Both counties are poor.

There is a longevity issue that Clinton did not mention and probably won't. Henderson noted

There is a considerable amount of data on life expectancy among Americans, much of it disturbing. According to the World Health Organization, the U.S. lags behind a long list of countries when it comes to overall life expectancy. WHO has reported that the U.S., factoring in both genders, has an overall life expectancy of 79 (76 for males, 81 for females) compared to 83 in Japan and Switzerland, 82 in France, Iceland, Spain, Italy, Australia, Canada, Israel, Luxembourg, Singapore and Sweden, 81 in Germany, the Netherlands, Austria, New Zealand, Finland, South Korea, the Republic of Ireland and Norway, and 80 in Belgium, Slovenia, the U.K., Malta, Kuwait and Portugal.

Lagging life expectancy in the USA is critical when considering the solvency of Social Security, for critics often cite increasing lifespan as rationale for increasing the age of eligibility for Social Security or for cutting benefits in some other manner.  Affluent people are living longer; the poor and the working class, not so much, if at all.

Consider, additionally, that Clinton is in a long line of would-be criminal justice reformers in pointing out "a stark fact" that "the United States has less than 5 percent of the world's population, yet we have almost 25 percent of the world's total prison population."It's a stark fact, also, that Americans don't live as long a, and enjoy less social mobility than, residents of similar nations, inconvenient refutation of the America the Exceptional meme.

Clinton does, however, seem to emphasize

When we talk about one and a half million missing African American men, we're talking about missing husbands, missing fathers, missing brothers.

They're not there to look after their children or bring home a paycheck. And the consequences are profound.

It's comforting to believe that "one and a half million missing African American men" (or lots of white men) would otherwise be there "to look after their children or bring home a paycheck."  But it just isn't so.

Criminality is not the preferred lifestyle of employed men, or even of men who stay close to home to look after their children.  There once was a time when liberals/progressives acknowledged the connection between being gainfully employed and avoiding descent into crime or deviance.  Mrs. Clinton prefers to paint a picture of families falling into poverty because of incarceration of the man of the house (to which she obviously was referring) rather than to remind us that poverty as often contributes to anti-social behavior.

She could have done that, of course, but that would have implied we have to spend money, a reality neo-liberals prefer to ignore.

"The era of big government is over, but we cannot go back to the time when our citizens were left to fend for themselves," President Clinton famously announced in January 2006, and his wife seems to have taken at least the first part of that to heart. Mrs. Clinton advocates one thing which would be a financial expense- or rather presumably would be an expense. It is an uncontroversial innovation and one to which no price tag has been widely applied, as if the cameras one day will fall down upon the heavens onto police uniforms, without cost to the public. (And maybe there will be no costto the public- wait until a creative municipality or state decides that they should be paid for with additional fees imposed upon those criminal defendants, whose concerns were the focus of HRC's entire speech.)

All the other reforms will be, it appears, will be revenue neutral- or perhaps even be revenue-positive. She did promise "I'll be talking about all of this in the months to come, offering new solutions to protect and strengthen our families and communities."

But for now at least, her priorities include ending "arbitrary mandatory minimum sentences" and expanding "specialized drug courts and juvenile programs (to) work to the betterment of individuals and community."  Presumably, the latter would replace prison terms for many offenders, and the former would bring (public/government) costs down by enabling inmates to be released early.

There are two facets of reform- law enforcement and criminal justice- to reform address crime in society. In her speech last week, Hillary Clinton ignored the first (except for a token reference to cameras) and was sorely lacking in the latter.