And If Your Hot Dog Is Made With Insecticide, Don't Buy It


Steve M. draws our attention to a recent conversation, which many conservatives found gratifying, on the Today Show:

SAVANNAH GUTHRIE: Well, New York, as we know, is famous for some outrageous prices sometimes, but let’s just put this out there right now – if you come to visit New York City, just know that $30 is too much to pay for a hot dog on the street. Our station here in New York, WNBC, actually caught a street vendor trying to sell a hot dog for 30 bucks...

GUTHRIE: ...they actually charge anywhere from three to 30 bucks – for one single hot dog. People obviously were outraged. When confronted, the vendor claimed not to speak English. New York officials say prices should clearly be posted and if you encounter something like this, file a complaint.

MORALES: What makes it worse was the vendor was apparently down by the Freedom Tower...

GUTHRIE: Where a lot of tourists go.

MORALES: ...so he was trying to profit right there in the face – yeah. Just horrible.

TAMRON HALL: But we make the point that it was a vendor. A, at a restaurant I still wouldn’t pay 30 bucks for a hot dog. But why can’t he set his own prices? I mean, if a restaurant sells their hot dog, steak, or whatever for the price they want, why is his price regulated? I wouldn’t pay it.

GUTHRIE: Is it regulated? It sounds like it wasn’t.

MORALES: Right around the corner is a guy selling them for a dollar. So, you know, walk the corner.

HALL: I mean, I think it’s taking advantage, but-

MORALES: That’s price gouging. I mean, I think it, you know, what’s fair is fair, and that’s just not fair.

HALL: ...if you’ve ever been to like Disney, the water – the bottle of water is like a million dollars. It just seems that he should be able to charge what he wants and it’s our choice.

GUTHRIE: What did you just – Jared just – they have to have the price posted, that’s what the rule says.

Ahmed Mohamed (photo below by Gabriella Bass) was fired by the guy who owns the food cart and vending license, who was not amused that Mohamed was pocketing the extra profits, nor that he himself will  have to pay the fine for violation of the city ordinance.

Tamron Hall  asks  "why can't he set his own prices? I mean, if a restaurant sells their hot dog, steak, or whatever for the price they wnat, why is his price regulated?" The conservative media outlet NewsBusters, which provided the transcript above, giddily notes that she has "stumbled upon conservative economic philosophy."  Kyle Smith at Murdoch's New York Post calls Mohamed the "Hot Dog Hero," who "was simply exercising his right to sell stuff in the marketplace for whatever he can get for it. Why begrudge him a large markup if he took advantage of the fact that some people are stupid?"

Let the buyer beware, no matter what she is being offered, and at whatever price or quality and if she is stupid, all the better. It's not only conservative economic philosophy, but bears a striking resemblance to conservative electoral philosophy.

Tamron Hall, who reluctantly accepts that the price should be posted if legally required, has trouble understanding why someone shouldn't be allowed to vary the charge for an item 1,000 percent. But if the price can vary wildly at someone's whim, the business can discriminate at will. Someone might decide that blacks (or short**, overweight, heavily-accented, or white people) are more keen on hot dogs, less inclined to control their impulses, or more likely to have screaming children in tow, than other individuals, and thus can be easily overcharged.

It makes discrimination much easier. Hall, though black, is no more required than anyone else to understand this, though it's remarkable that it wouldn't occur to an NBC (and sometime MSNBC) host. Perhaps being an attractive woman has allowed Hall to lead a charmed and privileged life in broadcast media. NBC should be credited, though, for refusing to muzzle one of its hosts for mouthing conservative gibberish. 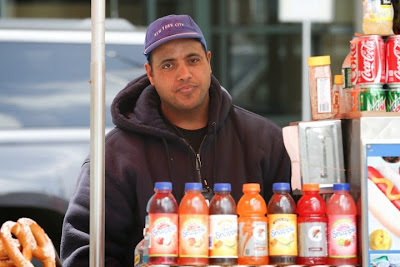