TLC now has pulled remaining episodes of "19 Kids and Counting" but stories and commentary about the molestation by then-juvenile Josh Duggar of several girls are likely to keep coming.

There is so much to write about that Josh has even been defended by a man of the left who otherwise refers to the Duggars as a "cultlike family that rejects Enlightenment values and closes off much of the outside world."

Salon's Mark Joseph Stern slams "much of the left (for having) greeted the news of his molestation charges with a kind of derisive, jeering disgust." He recognizes the Duggars

adhere to a fringe Christian movement called the “Christian patriarchy,” which commands total female submission to men and limited education for women. The Duggars do everything they can to control their children’s minds, then brainwash them with misogynistic dogma.

Josh Duggar grew up in this sexist milieu. He was told that women exist to serve men—to show them “submission,” “obedience,” and “reverence.” He was barred from seeking out any differing views about men and women. His mind was warped from childhood.

Regrettably, Stern then jumps to a conclusion, rhetorically asking "Is it any surprise that, by the time he reached adolescence, he believed girls’ bodies were his to touch however he pleased? "

Allow me to answer: yes, it is.  Molestation is an offense of a criminal nature, committed by Josh not at age 9, 10, or 11, but at age 15. He should at that point have known better, though Stern argues "even as we reprove him, we should remember the odious lies that were forced down his throat as a child."    Even most boys who have odious lies forced down their throat have boundaries they understand and respect.

However, there is another legitimate answer to Stern's question. It doesn't  really matter, at this point, given the statute of limitations, that Josh Duggar believed himself privileged to touch girls' bodies as he pleased.  Evidently, Josh believed at the time he was privileged. Now that he is older, he still believes he is privileged, perhaps enough not to have paid state income tax from 2009 throught 2012. Stern himself notes Josh

has fought against marriage equality and LGBT nondiscrimination ordinances, suggesting that such laws could jeopardize children. His mother implied that trans people are child predators. His employer wrote that gay marriage and gay adoption should be outlawed because gay men are extremely likely to molest young boys. And at the same time he and his family were promoting these noxious views and using reality TV to build their fame, they were covering up Josh’s record of molesting multiple young girls as a teenager.

At age 27, Josh Duggar probably is a far different individual than he was 12 years ago.  Still, most people with a secret as serious as his would not have chosen to become head of the Family Research Council's lobby arm (from which he has resigned), exposed himself- for a price- to tens of millions of television viewers, and been seen photographed with Ted Cruz, Rick Santorum, Mike Huckabee, Scott Walker, Rand Paul, Rick Perry, and John Ellis Bush (photos below, from whatever initial source, via Digby's Hullabaloo).   No one twisted his arm or put a gun to his head.

Nor did those young girls force him to molest them.   His defenders ought to point out that legally was a juvenile and now regrets his actions.  But he does not warrant pity, nor should others be held primarily accountable for his own behavior. 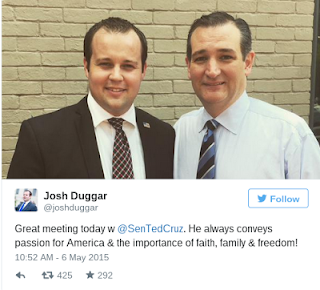 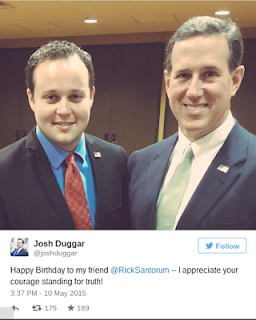 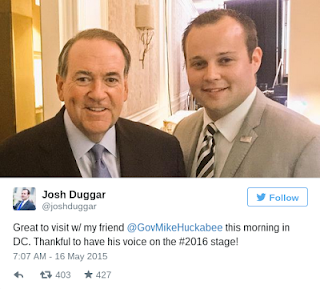 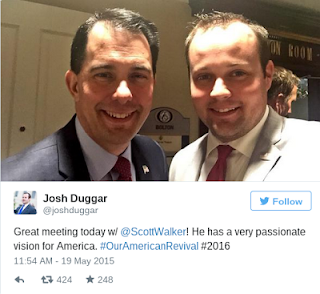 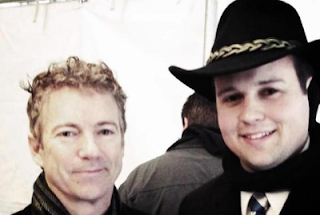 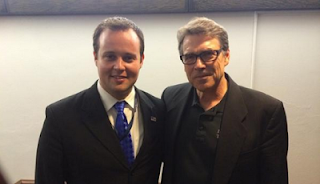 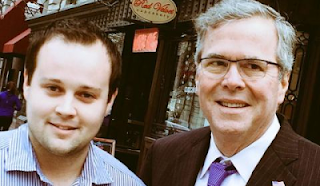