Speech Codes For All

We learned on Monday

A Duke University political science professor has drawn controversy and an official rebuke for racial generalizations he made comparing African-Americans and Asian-Americans in response to a recent New York Times editorial.

Prof. Jerry Hough, 80, whose staff profile says he has served as a professor since 1973 at the private institution in Durham, North Carolina, posted a six-paragraph comment on May 10 on the Times website underneath an opinion piece from the previous day about Baltimore’s history of housing discrimination.

“This editorial is what is wrong,” wrote Hough. “The blacks get awful editorials like this that tell them to feel sorry for themselves.”

The holder of three degrees from Harvard University and author of 14 books, largely on Soviet politics, then said that Asian-Americans “worked doubly hard” even though they “were discriminated against as [sic] least as badly as blacks.”

“The amount of Asian-white dating is enormous and so surely will be the intermarriage. Black-white dating is almost non-existemt [SIC] because of the ostracism by blacks of anyone who dates a white.”

Students, fellow professors and administrators immediately responded to Hough’s sentiments after local media outlets reported them on Friday. The professor has been on administrative leave for this entire year in the first year of a four-year retirement plan that will see him teach his last classes next fall and step down permanently in June 2018, The News & Observer of Raleigh reported.

Duke officials declined to comment on personnel matters at the school and noted that Hough was on planned leave well before the fracas over the comments. But they said they strongly disapproved of Hough's views.

“The comments were noxious, offensive and have no place in civil discourse,” Michael Schoenfeld, Duke’s vice president for public affairs and government relations, said in a statement. “Duke University has a deeply-held commitment to inclusiveness grounded in respect for all, and we encourage our community to speak out when they feel that those ideals are challenged or undermined, as they were in this case.”

It’s essential to look at how all this plays out within the classroom as well. This is where we can vividly see how attempts to silence and censor teachers, based on rumor and innuendo rather than facts, can manipulate administrators more interested in protecting their institution from bad publicity and frivolous lawsuits than in protecting the academic freedom of their faculty and students.

That's a good defense of academic freedom.... except Palumbo-Lui wasn't speaking about Duke. He is, instead, exorcised that the University of California system has been urged by a group of 57 rabbis from California and 104 UC faculty members to adopt the U.S. State Department definition for, as the LA Times explains it (in the article to which P-C links), "dealing with protests and potential discipline for anti-Semitic statements." Palumbo-Liu argues

Is being a critic of Israeli state policies actually the same as being an anti-Semite?  If every time one voices a criticism of Israel one is acting as an anti-Semite, and if making an anti-Semitic statement is prohibited by the State Department, then ardent supporters of Israeli state policies have won a huge victory — they have essentially made Israel immune from criticism, and made anyone even thinking about raising a serious concern about Israel think twice about just how (or even if) to voice that point of view.

This critique would be reasonable, almost justified, were the State Department suggesting that any criticism of Israel is anti-Semitic. But it is not. Rather, State does not actually define anti-Semitism, instead offering "contemporary examples of anti-Semitism" and (emphasis in the original) "EXAMPLES of the ways in which anti-Semitism manifests itself with regard to the state of Israel," which are

DEMONIZE ISRAEL:
Using the symbols and images associated with classic anti-Semitism to characterize Israel or Israelis
Drawing comparisons of contemporary Israeli policy to that of the Nazis
Blaming Israel for all inter-religious or political tensions

DOUBLE STANDARD FOR ISRAEL:
Applying double standards by requiring of it a behavior not expected or demanded of any other democratic nation
Multilateral organizations focusing on Israel only for peace or human rights investigations

DELEGITIMIZE ISRAEL:
Denying the Jewish people their right to self-determination, and denying Israel the right to exist
However, criticism of Israel similar to that leveled against any other country cannot be regarded as anti-Semitic.

Palumbo-Liu appears not to believe these are legitimate examples of anti-Semitism, though he does not explicitly state so. If, however: using traditional anti-Jewish symbols; comparing Israeli foreign policy to Nazism; applying certain standards uniquely to Israel; and fretting over a tiny piece of land turned over to Jews to prevent their annihilation is not anti-Semitism, I'd be pleased to know what is.

Additionally, the postscript "criticism of Israel similar...." is not insignificant, but is a loophole bigger than... well, bigger than Israel, for example. It presupposes a distinction between anti-Jewish and anti-Israel sentiment and suggests that only extraordinary criticism of the Jewish state would be considered unacceptable.

That is not to suggest that that adoption of the State Department standards would be a good idea. It is a pity that too few colleges recognize speech codes are per se odious. They focus on what is said, with a consideration of what is actually done a common casualty.   At Duke (their basketball fans, at their least repugnant, below, from the UK's Daily Mail), a professor is ostracized for speech, rather than behavior, a disturbing if fairly common instinct for institutions once havens for free expression. 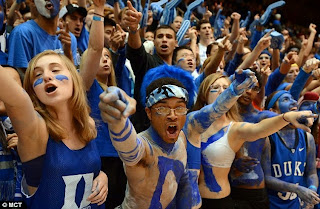 Professor Hough could well have been condemned for what he said. He might have been criticized for: maintaining that Asian-Americans work "doubly hard, that they faced as much discrimination as have blacks, that Asian students have simpler names than have blacks and are more desirous of "integration" (perhaps "assimilation"?), and that more Asians than blacks date whites because blacks are ostracized when they do so.  He could have been, but those opinions were not challenged as far as we can tell, probably because it was simpler and more comforting to condemn them as "obnoxious and offensive."

Meanwhile, whomever believed those generalizations will go on believing them because they were not rebutted. Still, those students, educators, and administrators at the private North Carolina institution have preserved their exquisite sensitivity and upheld their sense of moral righteousness. And they can be so proud that they have encouraged the group at the University of California and others to impose sanctions when people express sentiments they deem offensive or obnoxious. And so it goes when people are reviled more than ideas and words punished more than action.