There are several questions which need to be posed to Hillary Clinton.

She ought to be asked why she opposes the Trans Pacific Partnership, which she had periodically praised, once as "the gold standard." However, she already has stated, plausibly though arguably, that she reversed course once its details had been negotiated.

Mrs. Clinton should be queried about her campaign's interest in an endorsement- or some sort of vote of confidence- from the likes of George Schultz, James ("F_ _ _ the Jews") Baker, Condoleezza Mushroom Cloud Rice, and Henry Kissinger. However, she could write off support from any of those individuals as recognition that the brazenly unqualified Trump should not get his hands on the "nuclear codes."

It is stunning, or should be, that the Democratic candidate never has been asked when she dropped her support of President Bill Clinton's "safe, legal, and rare" approach to abortion in favor of a safe and legal approach.  Presumably, though, her support for the earlier test has been undermined by GOP efforts in numerous states to force a woman to jump through hoops to control her own body.

There are, though, two criticial questions now begging be asked of Donald Trump, who Friday claimed at a rally in Altoona, Pennsylvania

The only way we can lose, in my opinion — I really mean this, Pennsylvania is if cheating goes on and we have to call up law enforcement and we have to have the sheriffs and the police chiefs and everyone watching because if we get cheated out of this election, if we get cheated out of a win in Pennsylvania, which is such a vital state especially when I know what is happening here. She can’t beat what’s happening here. The only way they can beat it in my opinion, and I mean this 100 percent, if in certain sections of the state they cheat.

Grump appears to be laying the groundwork for denying the legitimacy of the election, and presidency, of Hillary Clinton if she is elected in November.  The GOP never has fully accepted the legitimacy of President Barack Hussein Obama and signs indicate, that there would be less acceptance among Republicans of Mrs. Clinton's approval by the electorate.

Yet there is another critical question which Trump has practically begged be asked:  What are these "certain sections" of which he speaks?

It's not as if we don't know, especially as Grump specified Pennsylvania, in which Democrats have won state and federal elections only by piling up huge majorities in Philadelphia with its large black population.  Voter suppression (map from the Brennan Center) continues in numerous states while many Republican voters believe, facts be damned, that some individuals cast numerous votes in the same election. (CNN's Michael Smerconish Saturday morning said that if pressed, Trump will cite the hpyed-up November, 2008 New Black Panthers incident, in which ominous-looking black males in uniform hung out at a polling place in a precinct in West Philadelphia in which fewer than 90 of 1500 registered voters were Republicans.) 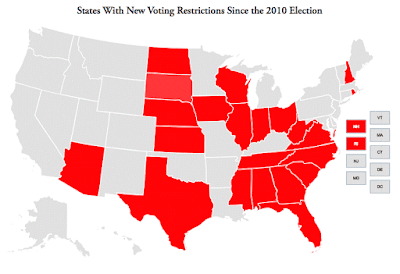 It's no coincidence that it was in Pennsylvania where a prominent Republican state legislator in June, 2012 boasted "Pro-Second Amendment? The Castle Doctrine, it's done. First pro-life legislation-a abortion facility regulations- in 22 years,done. Voter ID, which is gonna allow Governor Romney to win the state of Pennsylvania, done."

Ask Donald Grump what "certain sections" he was referring to. Ask, too, Paul Ryan, comfortable with supporting for President of the USA someone he considers racist, if he believes Democrats may rig the results in Pennsylvania.  Or the media can sidestep the issue of race, save Trump the discomfort of challenging him on his remarks, and thereby save him by an unintended exercise of political correctness.