Look Over Your Shoulder And Walk Fast!

When Nykea Aldridge, cousin of a future NBA Hall of Famer, was murdered in Barack Obama's hometown last week, Donald Trump initially responded by tweeting (emphasis his) "Dwayne Wade's cousin was just shot and killed walking her baby in Chicago. Just what I have been saying. African-Americans will VOTE TRUMP!"  (He later tweeted a more conciliatory and appropriate message.)

The supremely conservative Erick Erickson, whose antipathy toward Trump may be unmatched by any Republican, tweeted "you know when Republicans accuse Democrats of politicizing tragedy? Stop saying now, Republicans."

The Hill posted several tweets, from Josh Jordan,  Tim Miller, David Harris-Gershon, Maggie Haberman, Julie Roginsky, Tom Nichols, and Sam Stein. None of them is a Republican politican, though from Paul Ryan there might have been  "Donald Trump's tweet was the textbook definition of a cruel and insensitive comment. He's my choice for President."

For Spike Lee, himself not a conservative Republican, Trump's tweet "just shows where his heart is,," perhaps as the candidate's initial tweet to the massacre at the Orlando gay nightclub did.  However, Lee noted also "what happens in Chicago is way bigger than Donald Trump who is just trying to capitalize on it."

What happens in the USA is also way bigger than what hapens in Chicago, and Trump is trying to capitalize on all of it by frightening the nation's voters.

Two days after Trump's Aldridge tweets, he tweeted "Inner-city crime is reaching record levels. African-Americans will vote for Trump because they know I will stop the slaughter." German Lopez of Vox explains

Let’s be clear: Both parts of this tweet are completely wrong. Inner-city crime isn’t at or reaching record levels, and black Americans aren’t going to vote for Trump. This is just another example of Trump trying to manipulate voters in his direction.

He might have added "and there is no slaughter going on," unless Grump is confusing the USA witho such nations as Syria, Nigeria, and the Sudan.

The most recent data for crime comes from an analysis by Richard Rosenfeld, a criminologist at the University of Missouri in St. Louis, for the US Department of Justice, released in June.

Rosenfeld did find a 16.8 percent increase in the homicide rate — which is used as a proxy to measure all crime, since it’s the most reliable crime statistic — in 56 of the largest US cities from 2014 to 2015.

That comes, however, on top of a crime rate vastly lower than experienced almost a quarter century ago, especially in large cities, about which the candidate is trying to frighten people. Specifically

that increase comes after America’s massive crime and homicide drop over the past couple decades, and the 16.8 percent rise is nowhere close enough to make up the difference. The homicide rate in these cities isn’t even at the highest point in the past 10 years, as Rosenfeld’s chart demonstrates.

This chart masks a lot of variation, too. The homicide rate increased in most large US cities analyzed by Rosenfeld, particularly Orlando, Cleveland, and Nashville. But it actually decreased in 15 of the 56 cities included in this analysis, including Boston, Austin, and Miami.

The recent uptick in the homicide rate is troubling, but it’s unclear if it represents a change in the decades-long trend downward. Crime rates tend to ebb and flow from month to month and year to year — for example, in 2005 and 2006, the national murder rate ticked up by about 5 percent before falling down to the lowest point in decades in 2013 and 2014. So we’ll just have to wait a few more years before we know what the long-term trend is. 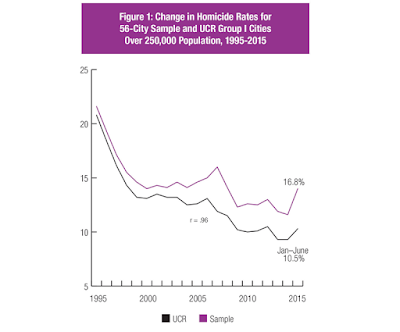 Donald Trump won't have to wait, however.  He launched his campaign by declaring immigrants are "bringing those problems with us. They're bringing drugs. They're bringing crime. They're rapists." He later added "tremendous, infectious disease is pouring across the border." He condemned "the thugs who are so happily and openly destroying Baltimore.” China is not only a threat but is out to "rape our country. That's what they're doing. It's the greatest theft in the history of the world." Moreover," If we do not get tough and smart real fast, we are not going to have a country anymore."

The country is no longer great, and is just about gone, according to the self-styled "law and order candidate." HIs first tweet about the shooting death in Chicago was cruel and tasteless but far less consequential than propagating the lie that Americans must be very, very careful because crime is soaring.  Donald Trump's rhetoric may be no more overheated and divisive than when he tries to condemn voters to a life of always looking over their shoulders and waiting for other people to strike them dead.