So Much For Family Ties

"You're not going to be able to insult your way to the presidency."


So asserted John Ellis Bush to Donald Trump last December.  George Prescott Bush (among others) is out to prove him wrong.

At the end of May, Texas land commissioner George P. Bush, son of John Ellis Bush, was already someone of questionable ethics. He then  was named as the GOP's 2016 Victory chairperson with the assignment, reported the Austin American-Statesman, of "raising money and running the statewide campaign to 'annihilate the Democrats up-and-down the ballot this November.'"

This ordinarily is not a difficult task in the State of Texas. The state's voters elect the 15 members of the State Board of Education, of whom ten are Republicans; eighteen judges, of whom 17 are Republican, and nine other important officials, all of whom belong to the GOP.  Texas invariably votes for the GOP presidential nominee, boasts a state legislature dominated by Republicans, and has two Republican Senators as well as a U.S. House delegation which is predominately Republican.

This shouldn't be a difficult job either for George P., whom we now find is strategically unbothered by family loyalty.  So while dad, uncle George, and grandfather George (as well as their wives) have refused to endorse GOP presidential nominee Donald Trump- who repeatedly taunted and trolled JEB during the campaign-  George P. feels no such compunction and

Addressing state GOP activists Saturday, Bush said it was time to put aside any lingering animosity from the primaries — where Trump defeated Bush's dad, former Florida Gov. Jeb Bush, among others — and get behind Trump.

"From Team Bush, it's a bitter pill to swallow, but you know what? You get back up and you help the man that won, and you make sure that we stop Hillary Clinton," Bush said, according to video of the remarks provided by an audience member. 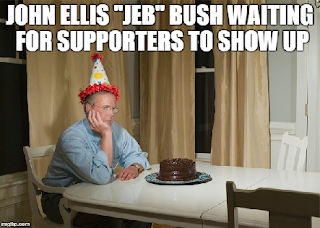 Having turned the General Land Office into (as his GOP predecessor described it) "an agency where demoralized employees are hunkered down waiting to be summarily fired and walked out of the building with a cardboard box containing a few personal belongings," George P. is now walking out on his family to preserve his political ambition.   Salon's Gary Legum believes after Trump loses

if, as seems likely, the party is going to go through a period of struggle and confusion at both the national level and in at least some states, there will be a need for rising stars to lead it when it comes out on the other side in whatever form it is going to take.

If Bush has any national ambitions, at that time he will be able to point to his actions in encouraging activists who were otherwise loathe to embrace Trump to work for the greater good of the party. He will be able to sell himself as a peacemaker of sorts, a loyal soldier dedicated to the Republican brand even in its lowest moments who still fought to keep Congress and the state legislature dominated by conservative politicians.

He is doing this by turning his back on his father, famously called a "total stiff," a "spoiled child," a "sad sack," a "lightweight," "clueless," "too soft," and "low energy" by the guy the son now has endorsed for President of the United States.  Bush did not take the job years, or even several months, ago. He grabbed it weeks after Ted Cruz and John Kasich had dropped out of the race, leavingTrump the presumptive nominee.  Though Bush could have declined the position, his political future beckoned.