Sitting While Others Stand


As an NFL quarterback, the San Francisco 49ers Colin Kaepernick, born to a black father and white mother and adopted by a white couple, possesses a rare combination of strength, extraordinary arm strength, and nearly unparalleled speed,  Now struggling to keep his starting job, Kaepernick has never been known as "cerebral," the term pro football experts use instead of "smart."

If that seems overly cynical or negative, you may want to stop reading.

Mr. Kaepernick now has opted to sit out the National Anthem during the 49ers' three exhibition games, as the league and his team acknowledge he has the right to do. It's not for show, he credily insists, and

I'm going to continue to stand with the people that are being oppressed.  "To me this is something that has to change. When there's significant change and I feel like that flag represents what it's supposed to represent, this country is representing people the way that it's supposed to, I'll stand.

Recounting an instance at the University of Nevada in which he and fellow students allegedly had guns drawn on them by police simply because they (the guys, not the guns) were black, Kaepernick argued

You can become a cop in six months and don't have to have the same amount of training as a cosmetologist, "There's a lot of things that need to change. One specifically? Police brutality. There's people being murdered unjustly and not being held accountable. People are being given paid leave for killing people. That's not right. That's not right by anyone's standards.

Fortunately, most police officers are entitled by contract to due process.  Shooting of civilians is invariably subject to invetigation and officers found to have acted irresponsibly are subject to severe punishment   With the rights of labor constantly under attack, too few workers currently enjoy due process or other protection from termination at will.  The right should be extended more to other fields of employment rather than denied to police officers.

Asked about the relationship between the presidential campaign and his protest, Kaepernick called Donald Trump "openly racist" and contended Hillary Clinton "has deleted emails and done things illegally" and "if that was any other person, you'd be in prison."

No one else would have been in prison becuase nobody but Secretary Clinton would have been in a position to delete three e-mails marked as "classified."  Kaepernick, it appears, does not suffer from understatement, having last month commented "this is what lynchings look like in 2016" upon posting to his Instagram account a video of a confrontation with police that left a civilian dead. 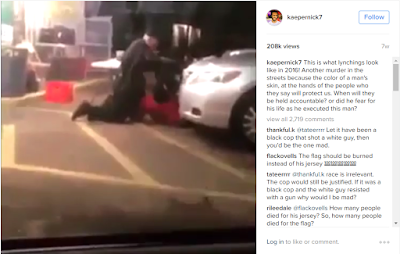 What Kaepernick lacks in judiciousness and football intelligence, however, he makes up for in courage.   He recognizes "I think there's a lot of consequences that come along with this. There's a lot of people that don't want to have this conversation."

That includes some fellow football players.  A far better and far smarter football player, safety Malcolm Jenkins of the Philadelphia Eagles- described here as "active in social issues"- remarked "He's standing up for what he believes in, but at the end of the day, all the headlines are going to be about him shaming the country and not supporting the troops?"

Those headlines can be about shaming the country and not supporting the troops only if individuals who are respected allow such this false narrative to take shape. Kaepernick did not "shame the country" and his protest had nothing to do with "the troops." It pertained to injustice toward black Americans, especially  in regard to police brutality.   And if Kaepernick's failure to show support for the National Anthem shames the nation or soldiers, the quarterback has a lot of company because, as The Philadelphia Inquirer's Bob Ford notes

Paying attention is not required. Fans shift on their feet, forget to remove their hats, surreptitiously check their phones again, take a swig of soda, and wait it out. Again, this is most of the time and most of the people. If you feel differently, and never, ever waver in your laserlike focus on the flag, that's a significant level of patriotism, if that is how you choose to define it, but you are not the norm.

The norm, moreover, includes drowining out the end of the Anthem by feverishly applauding the impending start of the event.

Few people, especially anyone connected with the NFL, will question Colin Kaepernick's cause, however questionable it is.  But if he is slandered by individuals as undercutting "the country" or the "troops," he is in for an undeservedly rough ride.