It's time to call it on Michelle Obama (photo below from Getty Images).  Vox reports that in an interview with Variety magazine, Mrs. Obama stated "My mom says it all the time: 'People are so enamored of Michelle and Barack Obama.'"

Imagine your neighbors, the Owens, telling you: "My mom says it all the time: 'People are so enamored of Jack and Jill Owens."  Humble folk, your neighbors, who know lots of odd people who use the word "enamored."

That statement at least has the advantage of being, in spirit, undoubtedly accurate.  But Mrs. Obama continues

And she says, "There are millions of Michelle and Barack Obamas." We’re not new. We’re not special. People who come from intact families who are educated, who have values, who care for their kids, who raise their kids — if you don’t see that on TV, and you don’t live in communities with people like me..."

There are millions of Michelle and Barack Obamas who, truth be told, are very impressive individuals.   As of 2013, Michelle Obama's net worth was estimated to be approximately 11.1 million dollars and that of her husband (as she would consider it) a paltry seven million dollars.

Unfortunately, the figures for this nation I could easily obtain were for 2009 and for individuals rather than households. Still, they are worthy for comparison with fairness compelling me to use the lower figure, Barack's $7,000,000.  In 2009 there were 320,277 individuals in the USA with equal or greater wealth.

It is difficult to determine their precise standing if Michelle's greater wealth ($11.1 million dollars) were added to Barack's wealth and the household figure of $18.8 million were compared to that of other households seven years later, during which wealth of the richest Americans climbed.  However, given  that the $7,000,000 was the lesser figure and relatively few homes feature two very wealthy individuals, their combined wealth compared to that of other couples would be far more impressive than that of Barack's alone.

One conclusion is clear and certain: there are not millions of Michelle and Barack Obamas. Take away their wealth, a move they would understandably find distasteful, and BO is one of 44 individuals ever to be President, and MO one of 45 First Ladies, of the USA ever.

But, gosh, there are millions of us, just average Americans, Michelle Obama assures us. No doubt you have several neighbors in the same class.  And yet, people are so enamored of us!

As much as the very rich claim they are just like you and me, normally something happens to them on the way up. That is nothing they should apologize for, nor anything they should deny. And if anyone reading this is convinced that were I so advantaged I would be even more self-delusional as Michelle Obama, please feel free to convey to me the mere $7 million or so Barack H. Obama is worth. Stocks, bonds, property, cash, or anything else would be gladly accepted at this blog's address.

I'll send you a nice thank-you note. As Donald Trump would say: believe me. 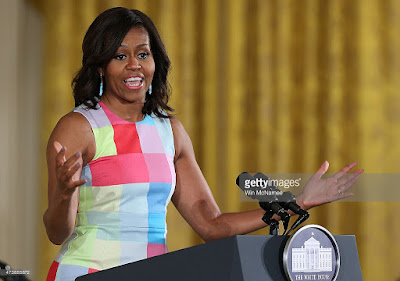