The Right To Vote, As Long As It's For Trump

On Tuesday night in Wisconsin, Donald Trump gave a speech covering a grab bag of issues in a remarkably superficial fashion.  (The only transcript available seems to be the one prepared for delivery, and given the candidate's penchant for going off-strip, any quotes may not be identical to his words as delivered.)   Trade, education, and Islamic terrorism also were trotted out for a cameo role.

It also was a highly partisan speech, in which Grump claimed

The Democratic Party has run nearly every inner city in this country for 50 years, and run them into financial ruin.

They've driven out the jobs.

Most of all, crime must be attributed to Democrats, and primarily to his opponent because "Hillary Clinton-backed policies are responsible for the problems in the inner cities today, and a vote for her is a vote for another generation of poverty, high crime, and lost opportunities."

Grump was short on facts, long on generalities and short on specifics, though he did complain about conditions in "inner cities,"  which is nowhere an official designation, unlike cities, towns, townships, boroughs, etc. But for voters over the age of 50 it is translated as "black"  and sounds like a dogwhistle out of Frank Luntz's bag of rhetorical dirty tricks.

It's not surprising that a candidate who has warned "We're going to watch Pennsylvania. Go down to certain areas and watch and study make sure other people don't come in and vote five times" had his eyes on the votes of white supremacists as he gave a speech pretending to be concerned about minorities.

No one can say for certain whether Grump in his shout-out to vigilantism was referring to illegal immigrants, obviously a particular scourge to him, or blacks, who make up the dominant voting bloc for Democrats in Pennsylvania.   But Trump has charged the system is "rigged" and supporters have portrayed him as willling to challenge both Democratic and Republican members of the Establishment.

Yet, he didn't mention the effort underway in many states, led invariably by Republicans and typically opposed by Democrats, to prevent blacks from voting.  Were it not intentional from a man who throughout his speech ignored the structural barriers to equality of opportunity in American society, it would be only an egregious oversight. 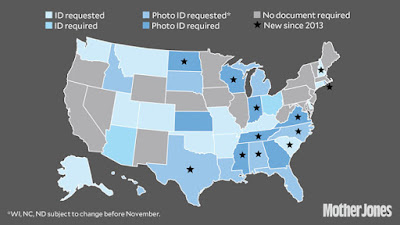 The GOP tactic of suppressing the vote of blacks and Latinos is no mere oversight, and belies any expression of concern for either group.  In July, the U.S. Court of Appeals for the Fourth Circuit struck down a voter idenification law in North Carolina because

Speaking in Virginia twelve days later, Trump was clear in his support for voter disenfranchisment, remarking 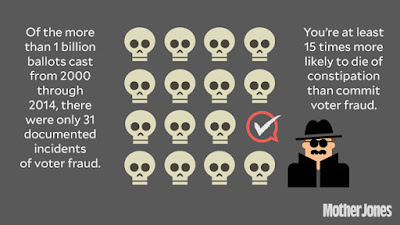 Requirement of voter identification is a great way of depressing the vote, and waiting times at polling places varies significantly among ethinic groups, as indicated by the chart below: 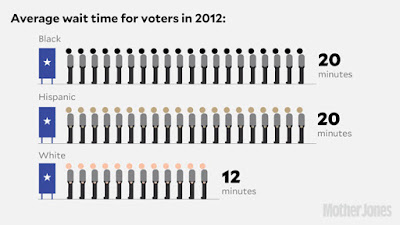 In recognizing the Voting Rights Act of 1965, Senator Barbara Boxer in 2003 wrote "Without a meaningful vote, there can be no equality before the law, no equal access, no equal opportunity." Donald Trump may buck his Party in varied and superficial ways and plead for votes of African-Americans. But promoting voter suppression, as he and his Party are most anxious to do, make clear that Donald Trump's GOP has little interest in the black community.