But though the words "fair trade" or "pro- fair trade" evade Isaac-Dovere, the concept of fair trade continues to escape someone far more consequential. We learn

And the White House continues to be on edge, with President Barack Obama nervously pushing for the deal to move in the lame-duck session. Not making a convention fight on TPP was the one request the president made of Sanders when they met in the Oval Office in June at the end of the primaries, according to people familiar with the meeting, and aides conveyed a similar message to Wasserman Schultz about the party platform when she was still guiding it as chair.

It worked: Sanders toned down his public rhetoric on TPP, though many of his supporters still went to the convention floor in Philadelphia holding anti-TPP signs. The platform contains watchful language about trade deals, but not the specific condemnation of the TPP that the West Wing dreaded.

Obama is placing the power of his office behind a deal less about "free trade" than about "patent and copyright protection (which) are really at the core of the TPP" and which "was crafted by and for the pharmaceutical industry, the software industry, the finance industry, the telecommunications industry and other major industry groups." It's how he rolls. If that is not surprising, that's part of the problem.

The tacit support Sanders evidently gave Obama in de-emphasizing the TPP at the convention is disturbing, especially because- in the absence of an explanation- the Senator did the President a favor he did not deserve.

Though he hasn’t needed to all that often, Obama has made good on his promise last year to commit himself to helping any member who faced political trouble for backing trade, recording robocalls for Wasserman Schultz and Rep. Derek Kilmer (D-Wash.), as well as Reps. Greg Meeks (D-N.Y.), Brad Ashford (D-Neb.) and Kurt Schrader (D-Ore.). Kilmer also got a TV ad from Obama, and Kind got a mailer with Obama’s endorsement.

They all  won and, Isaac-Dovere observes, "of the 28 House Democrats who were targeted by organized labor and the progressive base for supporting fast-track, Wasserman Schultz is now the 28th who either skated through a  primary challenge or didn't get one at all."

President Obama can't be blamed for the defeat of all 28, only (and merely in part) for those who were defeated by incumbents he actively supported.  But it was the Obama Party, has been the Obama Party, and remains the Obama Party. Back in late March the President (photo by Getty-Mandel Ngan) claimed "Debbie has been a strong, progressive leader in Congress and a hardworking, committed Chair of our national Party since I proudly nominated her to the role in 2011/  She always stands up and fights for what is right for her district while passionately supporting middle class families." 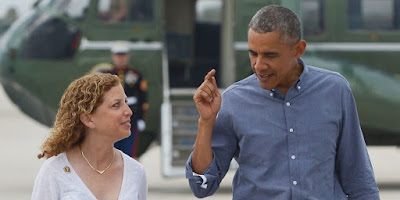 Barack Obama, still doing great stand-up! At the time, Charlie Pierce, too kind to both the congresswoman and the President, explained

Right now, Debbie is passionately supporting middle-class families by trying to deregulate the payday loan industry, which is probably the least excusable business in America until someone finds a way to franchise drive-thru anthrax dispensaries. She's also fighting for what's right by taking gobs of money from the private prison industry, which is probably the third- or fourth-least excusable industry in America. And, of course, in the past, DWS worked hard and was committed to the election of two of the most egregious Republican congresscritters rather than their Democratic opponents.

That's what passes in Obamaworld  for "passionately supporting middle class families." It has been that way for the past few decades, but not until this presidency has such allowance, and such loyalty, been given by Democratic voters to someone who says things like this.

In the manner of Pierce, who is much more forgiving of the President than I am: This is your (our) Democratic Party, friends. Cherish it.  Do so because the next time we have a President like Barack Obama, he or she won't be able to get away with putting a (D) after the name.