"Supreme Court justices," according to Think Progress in March, "are nominated by the president and appointed with the advice and consent of the National Rifle Association, according to Senate Majority Leader Mitch McConnell (R-KY)."

McConnell offered this unusual view of the confirmation process during an interview with Fox News Sunday. In response to a question from host Chris Wallace, who asked if Senate Republicans would consider the nomination of Judge Merrick Garland to the Supreme Court after the election if Hillary Clinton prevails, McConnell responded that he “can’t imagine that a Republican majority in the United States Senate would want to confirm, in a lame duck session, a nominee opposed by the National Rifle Association [and] the National Federation of Independent Businesses.”

If it is up to former US Representative Gabby Giffords (D-AZ), her husband Mark Kelly, and the PAC they formed, Americans for Responsibile Solutions, NRA ally Mitch McConnell will remain Senate Majority Leader.

That's a little harsh toward Ms. Giffords, who was gravely wounded in the mass shooting incident of January, 2011 in Tucson, in which Jared Loughner killed six individuals and wounded 13 people.  However, having a political blog with no advertising has its advantages.  In an op-ed on CNN's website, Giffords/Kelly write

In the wake of the tragedy at Sandy Hook, Republican Sens. Pat Toomey and Mark Kirk broke from the gun lobby and supported a bill to help prevent felons, domestic abusers and the dangerously mentally ill from obtaining firearms at gun shows and online.

This week, they are earning our organization's endorsement.

With so many more candidates running on a gun violence prevention platform, in some places the changing politics of gun safety has made our endorsement decision difficult. In Pennsylvania, Katie McGinty is a passionate advocate for gun violence prevention and would be a consistent vote for life-saving gun safety laws in the Senate. Likewise, Tammy Duckworth of Illinois is not only a decorated veteran and an American hero, but has been a champion for commonsense gun laws in the House. We have no doubt she would continue to be a leader on gun safety in the Senate.

Mark Kirk, perhaps the closest Republican in the United States Senate to a "moderate," is a tough call. But Pat Toomey, once the head of the corporate-enamored Club for Growth, should not be, for as the Associated Press reported nine weeks ago

Not so Illinois Sen. Mark Kirk....

Toomey, Portman and Johnson — as they did in December after shootings in San Bernardino, California — supported a NRA-preferred measure to deny a gun sale to a known or suspected terrorist, but only if prosecutors could convince a judge within three days that the would-be buyer was involved in terrorism. The three also helped to defeat a Democratic-sponsored bill to close the gun show loophole and expand background checks.

Kirk is an underdog, Toomey probably a slight favorite to retain his seat.  Nevertheless as Pennsylvania's Democratic Party spokesperson pointed out, “Pat Toomey isn't a moderate on guns, period.  He's stood in the way of common sense gun safety laws and he would happily keep Mitch McConnell as the Senate Majority Leader, meaning that gun safety laws have almost no chance in the Senate" (photo from AP/Susan Walsh). 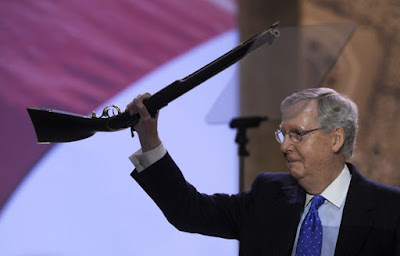 Bipartisanship has its merits as well as rewards, the latter in fundraising, maintaining a moderate image in the mainstream media, not alienating old friends. In this case, however, the fetish of bipartisanship is destructive to the cause Giffords and Kelly (who have supported Democrats as well as Republicans) are interested in.  If Hillary Clinton- as expected- is elected President, Toomey retains his seat, and Democrats end up with 49 Senate seats, the Arizona couple will have a lot to answer for.