Oh, how I miss (no sarcasm) the days when conservatives would blame the nation's ills on "unelected judges."

S. 2024, the State Marriage Defense Act, which respects the definition of marriage held by the people of each state and protects states from the federal government’s efforts to force any other definition upon them. The bill will ensure the federal government gives the same deference to the 33 states that define marriage as the union between one man and one woman as it does to the 17 states that have chosen to recognize same-sex unions.

Cruz argues "the Supreme Court's reasoning requires the federal government to respect the primacy of the states in defining marriage." The Defense of Marriage Act denied to same-sex couples benefits which, Salon's Ian Millhiser notes, "were enacted through Congress' power under the Constitution to tax and spend money, a power which necessarily includes the authority to decide who is taxed and who receives federal spending."  In his majority opinion striking down the Act, Justice Kennedy wrote "DOMA rejects the long-established precedent that the incidents, benefits, and obligations of marriage are uniform for all married couples within each State." Kennedy's reasoning, observes Millhiser, is "a states' rights argument similar to the one tea partiers have used to claim Medicare is unconstitutional" and could be wielded to eliminate much of the social safety net.

I support traditional marriage. Under President Obama, the federal government has tried to re-define marriage, and to undermine the constitutional authority of each state to define marriage consistent with the values of its citizens. The Obama Administration should not be trying to force gay marriage on all 50 states. We should respect the states, and the definition of marriage should be left to democratically elected legislatures, not dictated from Washington. This bill will safeguard the ability of states to preserve traditional marriage for its residents.

Section III, which defined marriage for purposes of federal law as between a man and a woman, was found to be unconstitutional by a district court judge.  That was not done by the Executive branch- which stood by, refusing to defend the law in Court- but by the judicial branch.  The federal government under President Obama did not "undermine the constitutional authority of each state to define marriage consistent with the values of its citizens," a prerogative Kennedy declined to address.

The Obama Administration, which has never advocated a federal law legalizing same-sex marriage, has not undermined the constitutional authority of the state. Attorney General Holder has vowed that the Justice Department "will strive to ensure that same-sex marriages receive the same privileges, protections, and rights as opposite-sex marriages under federal law" (emphasis mine).  The Administration has not challenged the authority of individual states to deny to gay couples benefits  under state law.

But courts are finding otherwise.  Since the DOMA ruling, federal courts in five states have considered s-sm, and all five- including in Utah, Oklahoma, and Virginia- have decided in favor of the option.

And also, in Ohio and Kentucky.    In Ohio, a U.S. district court judge decided that for the purposes of obtaining a death certificate, the state of Ohio cannot discriminate in issuance of a death certificate against a gay couple legally married in another state.

And Kentucky, on February 12.  In the United States District Court for the Western District of Kentucky, Judge John G. Heyburn- without considering the full faith and credit clause of the Constitution- ruled in a case involving four couples that Kentucky must recognize same-sex marriages performed legally in other states.  He considered only

whether Kentucky can justifiably deny same-sex spouses the recognition and attendant benefits it currently awards opposite-sex spouses. For those not trained in legal discourse, the questions may be less logical and more emotional. They concern issues of faith, beliefs, and traditions. Our Constitution was designed both to protect religious beliefs and prevent unlawful government discrimination based upon them.

Even that court did not invalidate Kentucky's prohibition against s-sm, but rather extended to gay couples married in another state rights denied to gay couples married in Kentucky. Judge Heyburn ruled merely that same-sex couples could not be denied those benefits of marriage conveyed because they were legally married in another state. Kentucky must grant to same-sex couples married elsewhere the benefits of marriage but may continue (for now at least) to refuse its own residents the right to marry whomever they want.  Limited in scope, the decision perversely granted to some individuals who move to Kentucky rights which the state (legitimately, if not justifiably) denies to some of its own residents.

The decision in Kentucky does serve to highlight the unfairness and rank absurdity wherein one state recognizes something as a right under the United States Constitution that another does not.   That will not end until the U.S. Supreme Court makes a definitive determination regarding same-sex marriage. But even then, if it is ruled unconstitutional in the next 1069 days, the likes of Ted Cruz and Mike Lee will blame it on Barack Obama. 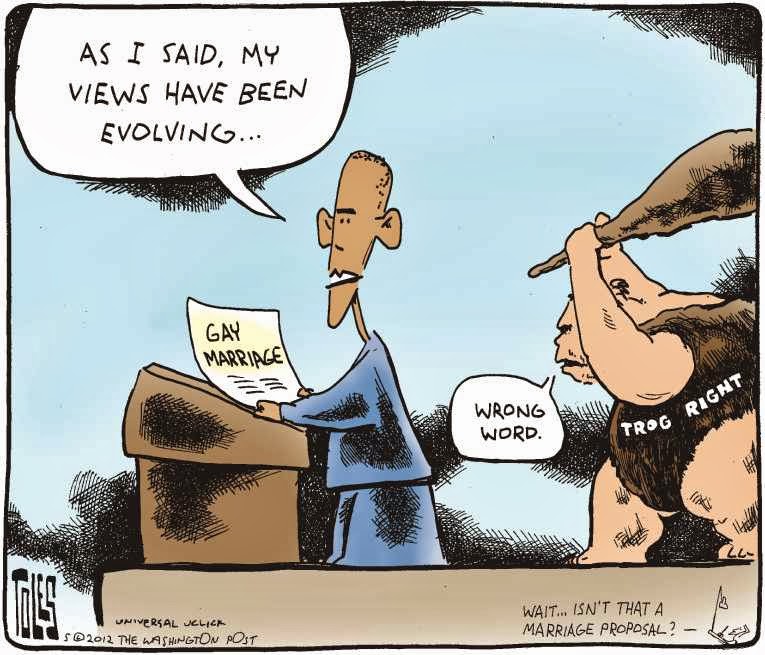