Cuomo On The Same Path As The Master

In his recent expose of the New Jersey governor (shown below, distastefully exposed), the New Republic's Alex MacGillis revealed Christie's fervent efforts to avoid being identified with any Republicans in the Democratic state, recognizing that it might reduce his upcoming winning margin to, say, 20 points.  He notes

As Election Day neared, you could be forgiven for mistaking Christie for a Democrat. State Republicans were frozen out; candidates were told not to include his name or picture on their literature. “We didn’t get the support,” says George Wagoner, a losing Assembly candidate. Meanwhile, the weight of the Democratic machine swung behind the Republican governor.

More than 50 Democratic elected officials endorsed Christie, including Brian Stack (who was hit with a $68,725 fine in July for failing to properly disclose campaign spending) and Joe D. (who also has a large fine looming). In photos and media appearances, Christie kept showing up smiling alongside Sweeney and other prominent Democrats. Norcross didn’t formally endorse Christie, but he made his approval clear. At one event, Norcross said he’d recently seen a man in a “Chris Christie: too big to fail” t-shirt. He told Christie: “You’re not too big to fail—you’re too good and too important to fail us.” 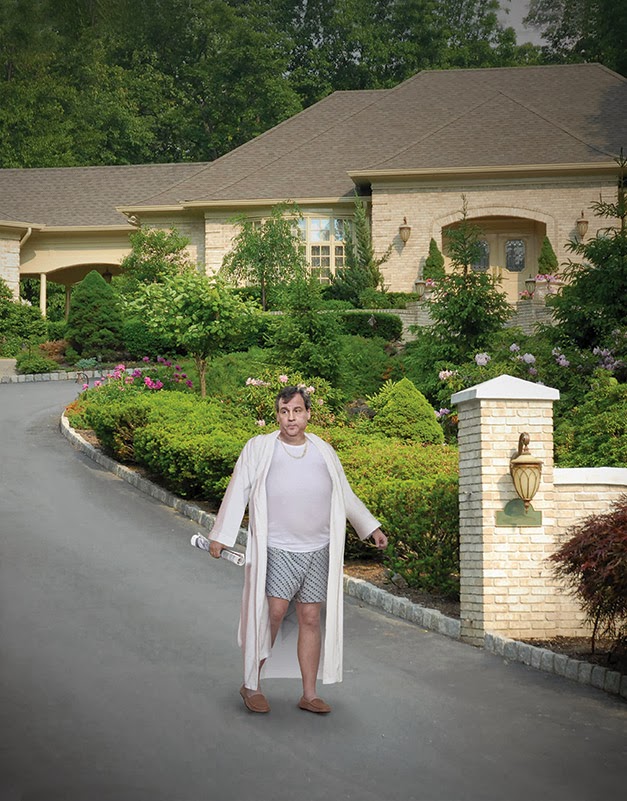 Susanne Craig and Thomas Kaplan in The New York Times describe the similar tactics being employed by New York governor Andrew Cuomo, who

actually has a friendly working relationship with many Senate Republicans. He and those senators have been at odds on social issues, but he has relied on their backing for his fiscal agenda, which has focused on issues of great importance to Republicans, like restraining government spending and cutting taxes.

The governor’s private conversations, and other communications made through intermediaries, were described by senior officials in both parties who have heard from Mr. Cuomo recently. Nearly all insisted on anonymity to avoid antagonizing him.

A spokeswoman for the governor, Melissa DeRosa, said, “This story is nothing more than political gossip from people with obvious motives.” She declined to elaborate.

The Republicans now control the Senate in a coalition with a small group of breakaway Democrats. Mr. Cuomo has expressed concern before about the main caucus of Democratic senators, citing the “dysfunction” and chaos that defined their time in the majority in 2009 and 2010, and has conspicuously remained on the sidelines as the two parties have battled for control.

Any effort now by the governor to aid Republicans in their fight to retain control of the Senate would be fraught with the risk that he could antagonize politicians in his own party, whose support he will need for major initiatives, including his budget, which is now being hashed out in Albany.

“The governor prides himself in being the master triangulator,” a senior Democratic operative said. “This is not going to help his cause as we try and try to get the budget done.”

In Mr. Cuomo’s conversations with Republicans, officials say, the governor has specifically warned that he would campaign hard against Mr. Astorino, painting him as a hard-line conservative — by highlighting his opposition to same-sex marriage, abortion rights and strict gun laws approved last year.

That type of aggressive campaign, Mr. Cuomo has cautioned, would hurt all Republicans, causing collateral damage to the re-election campaigns of some Republican state senators, whose party is clinging to power and cannot afford to lose many seats.

“He’s told me that if Astorino runs, he is going to pound the hell out of him and talk about guns and gays, and it won’t be pretty and will hurt all of us,” said a Republican senator who asked not to be named.

With less than nine months until Election Day, Mr. Astorino is the only Republican officeholder who appears to be seriously considering a bid for governor, and causing second-guessing in the Republican ranks could enhance Mr. Cuomo’s advantage.

In addition to offering his commentary on Mr. Astorino, Mr. Cuomo has also tried to woo Republican donors and others who might be inclined to support a Republican. Last month, and on Monday, the governor talked up his record to business leaders at the Harvard Club in Manhattan. Kenneth G. Langone, co-founder of Home Depot, gave his imprimatur to the Monday event.

On November 1, more than 100 wealthy political donors, including former New York Stock Exchange CEO Dick Grasso, streamed into the luxurious Conrad Suite at the Waldorf-Astoria on Manhattan's Park Avenue for a lunchtime fundraiser. The event was a smashing success, raising six figures for Mitt Romney—three times what had been expected. Save for the candidate himself, no one could have been more pleased than Ken Langone, the legendary investment banker who had organized the fundraiser and who, armed with a fat Rolodex and the pugnacity of a by-the-bootstraps billionaire, wants nothing more than to defeat Barack Obama in 2012.

Andrew Cuomo is a shoo-in to win no matter who the Republicans nominate. And he has come right out and said that he doesn't want to have to run against a real social conservative because a campaign around gay rights or abortion might make Democrats vote for other Democrats than just him. And that would mean he wouldn't have all those nice Republicans to help him cut "deals" to screw Democrats.

This is nothing new for the ostensibly Democratic governor. Two years ago, Janell Ross of The Huffington Post had reported

In a deal done in the dead of night last week, New York became the latest state to drastically overhaul its pension plan against the wishes of its public employees. After months of political arm-twisting, the state legislature passed on Thursday a slate of measures expected to save the state $80 billion over 30 years while cutting retirement payments guaranteed to state workers.

Similarly, in 2011 Governor Christie- with support from Democratic Senate President Steve Sweeney, Democratic Assembly Speaker Sheila Oliver, and some other Democrats undercut contractual agreements by cutting the pension of public employees.  According to a union complaint, they were "suspending pension adjustments, increasing employees’ contributions, underfunding pensions and delegating to pension committees an 'unrestrained authority to reduce pension and change eligibility requirements.'"

In her piece, Ross had explained

Public pensions are taking the blame for a much larger set of financial decisions, said Brian McDonnell, legislative and political director for AFSCME-NY, a public sector workers union that represents about 420,000 workers in the state. The state legislature has put local governments in a difficult financial position that pension reforms will not address, he said.

Last year, the New York legislature limited property taxes -- a key source of revenue for cities and counties -- to increases of no more than 2 percent each year. New York, like many states, also slashed the money it sends to municipalities.

Cuomo then stood behind an income tax plan that will pull less money out of rich households this year, said McDonnell.

Limiting annual local property tax increases to 2% and slashing municipal aid.  Where could Cuomo have gotten that idea?  In 2010

Nevertheless, net property taxes have increased significantly under Governor Christie, in part because he slashed state aid to municipalities.

Cuomo and Christie both are determined to achieve conservative ends, enhancing the power of the wealthy, by aligning themselves with allies of the opposite party. It's a media- pleasing, self-serving strategy of earning bipartisan bonafides by working against your own party.

One official said the governor had indicated he would refrain from such a polarizing campaign if the Republicans ran a candidate who in his view was more moderate. But no such moderate Republican has yet stepped forward as a serious alternative to Mr. Astorino.

Some Republicans say that in making a case against Mr. Astorino, Mr. Cuomo is also trying to undermine a potential challenger. Mr. Astorino, they say, has built a reputation for fiscal belt-tightening in wealthy Westchester, where Democratic voters outnumber Republicans two to one — roughly the same as the electorate statewide.

Democrats portrayed Mr. Astorino as a right-wing Tea Party extremist last year, but he campaigned on holding down taxes and easily defeated his Democratic opponent. “Andrew Cuomo is being a bully,” said Edward F. Cox, the state’s Republican Party chairman. “His attempts to derail Rob Astorino’s candidacy show just how worried he must be.”

Worried only that his strategy of the 1% might falter if too many members of his own party are elected.  Still, there is an ironic twist to Cox's statement.   The description of  Cuomo as a "bully" actually may be the main difference between the New York governor and Christopher J. Christie because the latter, MacGillis explains, isn't only

a bully. It's that his political career is built on a rotten foundation. Christie owes his rise to some of the most toxic forces in his state- powerful bosses who ensure that his vow to clean up New Jersey will never come to pass.he has allowed them to escape scrutiny, rewarded them for their support, and punished their enemies. All along, even as it looked like Christie was attacking the machine, he was really just mastering it.

Now only a novice, Andrew Cuomo has a long way to go to match the master of manipulation in New Jersey.