When he was asked about running for president, Republican governor Bobby Jindal of Louisiana responded, "My honest answer is I don't know what I'm going to be doing in 2016."

An even more honest answer would have been: "I don't even know what stupid thing I'm going to say next." The Associated Press reports

The nation's governors emerged from a meeting with President Barack Obama on Monday claiming harmony, only to immediately break into an on-camera partisan feud in front of the West Wing.

Louisiana Republican Gov. Bobby Jindal lashed out first, saying if Obama were serious about growing the economy he would approve the Keystone XL pipeline project and take other executive actions.

Instead, Jindal said, Obama "seems to be waving the white flag of surrender" on the economy by focusing on raising the federal minimum wage to $10.10, up from $7.25. "The Obama economy is now the minimum wage economy. I think we can do better than that," Jindal said.

Jindal's statements were the kind that Republicans often make on television appearances or at partisan events, but don't usually come from potential presidential candidates standing yards from the Oval Office. Other governors had been instead expressing wide agreement and appreciation for the president's time. As Jindal spoke, some of his colleagues began shaking their heads, and Hawaii Democratic Gov. Neil Abercrombie began audibly mumbling to others around him.

Connecticut Democratic Gov. Dannel Malloy took over the microphone from Jindal and responded sharply, "Wait a second, until a few moments ago we were going down a pretty cooperative road. So let me just say that we don't all agree that moving Canadian oil through the United States is necessarily the best thing for the United States economy."

Oklahoma Gov. Mary Fallin, a Republican who chairs the National Governors Association and supports Keystone, earlier said she asked Obama when the administration would decide whether to allow it and he told her there would be an answer in the next couple months.

Malloy said Jindal's "white flag statement" was the most partisan of their weekend conference and that many governors support a minimum wage increase.

"What the heck was a reference to white flag when it comes to people making $404 a week?" Malloy snapped. "I mean, that's the most insane statement I've ever heard."

Jindal did not the back down.

"If that's the most partisan thing he's heard all weekend, I want to make sure he hears a more partisan statement," the Louisiana governor responded. "I think we can grow the economy more if we would delay more of these Obamacare mandates."

But Malloy was already walking away from the news conference. He called Jindal a "cheap shot artist" as he departed the White House grounds.

The public dispute came after Obama appealed to the governors for their help to advance his economic policies that stand little chance of winning passage on Capitol Hill.

Of course,Obama's economy isn't the minimum wage economy as he has steered us, however unevenly and slowly, out of the deepest economic downturn since the Great Depression.

Although overly simplistic, it would be more accurate to call the Reagan economy the minimum wage economy.  (Republicans complain Democrats blame everything on George W. Bush. I'm not.) As the graphs (from Modeled Behavior) below indicate, employee compensation as a percentage of real income has plummeted; real household incomes have soared for the top 1% while they have stagnated for the middle 60% and bottom 20%; real income of individuals of the 1% has exploded while that of the middle and lowest quintiles has lagged. 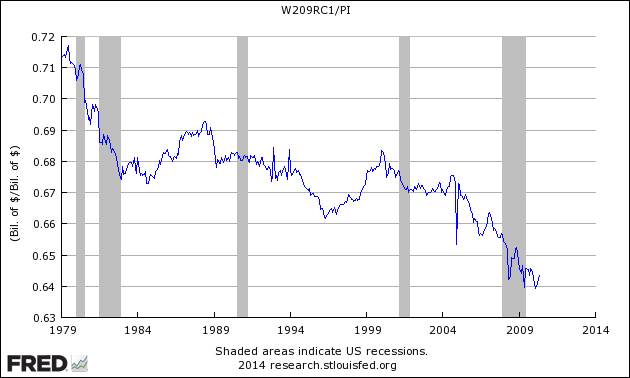 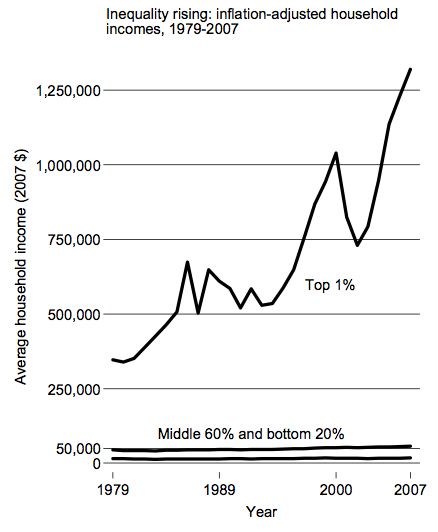 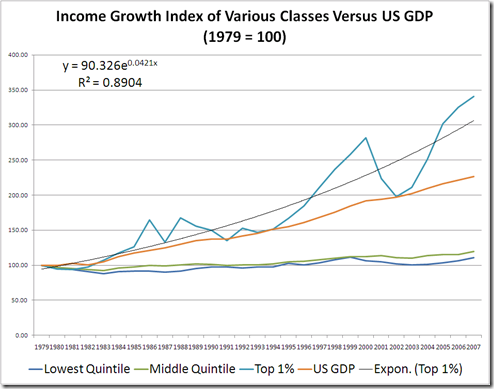 Linking to these graphs, Will Bunch remarks "It's no accident that today when you see a chart of income inequality in America, it starts in 1980, the year that Reagan was elected to his first term."  But it's worse than that. Ronald(6) Wilson(6) Reagan(6) was elected in 1980 but did not take office until (January) 1981; a close look at these charts and the others suggest that the major decline did not begin until 1981!

Reagan, Bunch recalls, "unleashed the hounds of American greed" and

His steep reduction in top income rates sparked the huge gaps between CEO pay and what the average worker makes, his crushing of the air traffic controllers unionlaunched an era of declining fortunes for blue-collar workers, his deregulation of the savings and loan industry was a multi-billion-dollar boondoggle, and his similar laizzez-faire attitude toward Wall Street inspired some great movies but marked the dawn of an era of insider trading and swindles that went largely unchecked until it finally took America to the brink in 2008.

Governor Malloy could have pointed out that the decline of the USA- if the poor and the middle class matter- began with President Reagan, though then he would have been chided for partisanship.  But it wouldn't have mattered. In the ABC news report of the incident, Jonathan Karl begins "it started as a Kumbaya moment of bi-partisanship"; then, Bobby Jindal "stepped to the microphones," said "the president and the White House seems (sic) to be waving the white flag of surrender," after which Dan Mallow stated Jindal's comments "just ended up being the partisan statement we heard all weekend."  In his telling, they were equally at fault, the Republican governor who accused the President of the USA of "surrender" and the Democratic governor who called this out for rank partisanship.

Ten years ago, we were reminded

The 1980s saw pervasive racial discrimination by banks, real estate agents and landlords, unmonitored by the Reagan administration. Community groups uncovered blatant redlining by banks using federal Home Mortgage Disclosure Act information. But Reagan’s HUD and justice departments failed to prosecute or sanction banks that violated the Community Reinvestment Act, which prohibits racial discrimination in lending. During that time, of the 40,000 applications from banks requesting permission to expand their operations, Reagan’s bank regulators denied only eight of them on grounds of violating CRA regulations.

These cutbacks had a disastrous effect on cities with high levels of poverty and limited property tax bases, many of which depended on federal aid. In 1980 federal dollars accounted for 22 percent of big city budgets. By the end of Reagan’s second term, federal aid was only 6 percent.

The consequences were devastating to urban schools and libraries, municipal hospitals and clinics, and sanitation, police and fire departments – many of which had to shut their doors.

Amnesia may be a curse. But not if you're a Repub interested in the Oval Office, it sometimes is too tempting to resist.