Employment A Priority, Except When It's Not

Noting that the care of children usually is left up to women and the enduring prejudice against women in the science and math fields, Annie Rose-Strasser of Think Progress laments

One year into a profession in science, technology, engineering, or math (STEM), women are far more likely to leave their jobs than their male coworkers. A new study released Wednesday by the Center for Talent Innovation finds that women call it quits 45 percent more often in their rookie years at such STEM jobs than men.

Women are consistently underrepresented in high-tech fields. Despite making up about half the U.S. workforce, they’re a mere quarter of American STEM workers. And their numbers have been stalling. It’s not that women aren’t getting STEM degrees; they make up 41 percentof those graduating from engineering or science programs. But when they leave school, they’re not always going into the workforce for which they’ve been trained. Previous research has found that “men are employed in a STEM occupation at twice the rate of women.”

The Center for Talent Innovation (CTI) study reveals why: Women are abandoning their STEM careers within months of starting them. Nearly one in every five women with a STEM degree is out of the labor force entirely.

Much of the United States Congress (especially in the Senate) is determined, if not to reduce further the percentage of STEM employees who are (is?) women, to cut the absolute number of male and female graduates of American universities who can find jobs in the field.  Robert Oak explains that under S744, the Border Security, Economic Opportunity, and Immigration Modernization Act

Hit particularly hard will be American Scientists, Technologists, Engineers and Mathematicians (STEM). Not only will the bill increase H-1B Visas from 85,000 to 135,000, they are allowing the limit to go to 180,000 per year. That is basically all of the jobs created each year in these occupations.  That means every single STEM job would end up being foreigners preferred, forcing U.S. workers out of their careers as the faux pas worker protections are clearly written to be vague and loophole ridden.  Just as lobbyists wrote this turkey in actuality, big business will also make sure any U.S. workers protections will be removed before actual legislation passage.

We have shown many times, there is no labor shortage at any skill level in the United States  In particular there is no labor shortage in the Science, Technology, Engineering and Mathematics occupational areas.   Yet in this bill there would be no limits or instant green cards for the below occupational categories.  Bear in mind many STEM PhDs currently cannot find a job as there is already such oversupply of workers at this educational level.

Most of the new Visas focus on STEM jobs, so clearly the U.S. engineer is going to be wiped out, turned into a dinosaur by flooding the U.S. labor market with anyone who claims they can write a couple of lines of C# code.  The Bill seems to allow the many other employment based Visas to be used for skilled workers as well, up to 40%.  Then the bill creates a nebulously defined startup Visa with no restrictions of type of business, jobs created or employees hired from the summary.  Just to make sure Congress crowds out every American professional possible, they even replace the 55,000 diversity Visas, with even more Visas. Another 250,000 Visas to be specific, all based on merit scoring, and that merit score is really defined by lobbyists, of course. Quotas for green cards has also been increased by removing the family members of those holding employment based Visas.  That is at least a two fold increase, if not a four-fold backdoor increase in legal permanent residents per year.

The American left often will wax indignant, as it must, about persistent high unemployment, lack of jobs, and declining real wages.  Periodically, however, it will break from its concern to support comprehensive immigration reform, often ridiculing opponents.

The labor participation rate in December was 62.8%, identical to that in October, the lowest since 1978 (first chart from The Wall Street Journal's Market Watch, below, the second from IEEE Spectrum).  Jobs- including those in the Science, Technology, Engineering, and Mathematics sector- are at a premium while an unconscionable number of Americans is unable to find employment.  The answer for some is to flood the labor market and put downward pressure on wages, gutting opportunity for a generation of American workers. It is an odd sort of progressivism, one which sends workers to the back of the bus while corporate America, already flush with cash and increasingly contemptuous of the labor force, is further ensconced in the driver's seat. 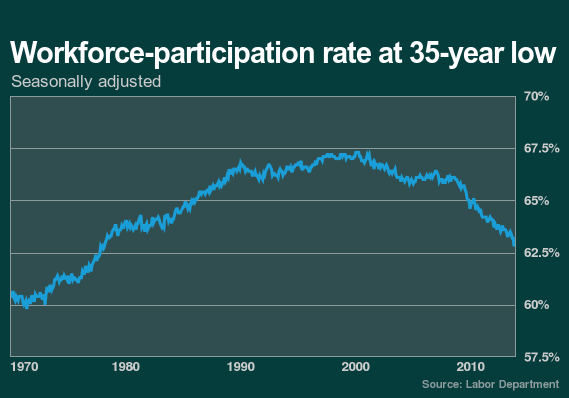 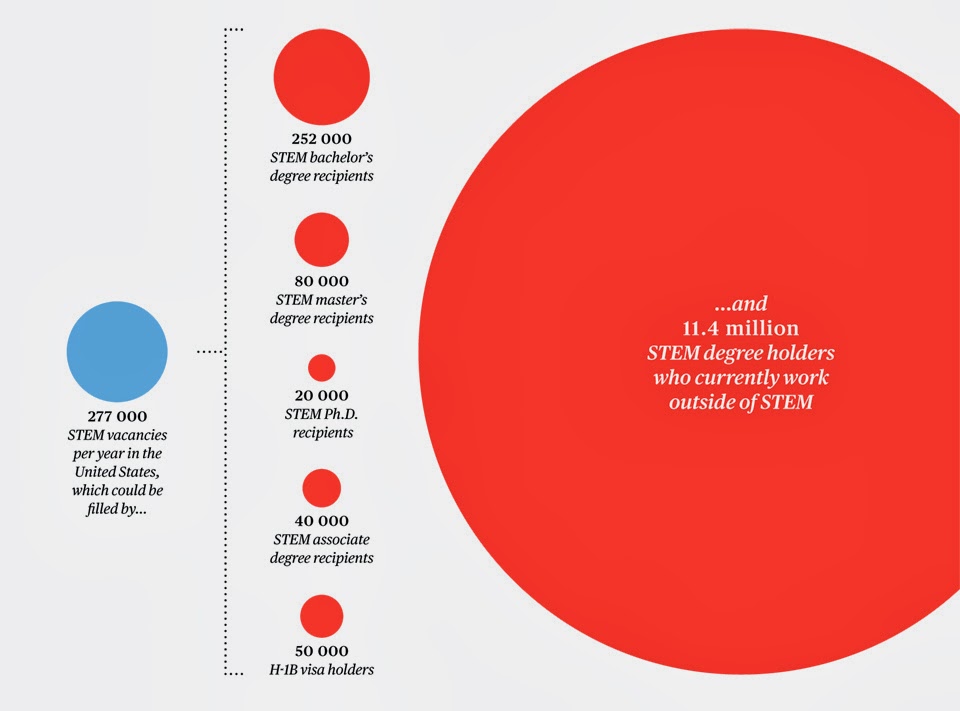