Too Late, They Get Religion

On October 20, 2013 the editorial board of the Star-Ledger of Newark, New Jersey's largest newspaper, wrote of the incumbent governor standing for re-election

The property tax burden has grown sharply on his watch. He is hostile to low-income families, raising their tax burden and sabotaging efforts to build affordable housing. He’s been a catastrophe on the environment, draining $1 billion from clean energy funds and calling a cease-fire in the state’s fight against climate change.

The governor’s claim to have fixed the state’s budget is fraudulent. New Jersey’s credit rating has dropped during his term, reflecting Wall Street’s judgment that he has dug the hole even deeper. He has no plan to finance transit projects and open space purchases now that he has nearly drained the dedicated funds he inherited from Gov. Jon Corzine.

His ego is entertaining, but it’s done damage as well. By removing two qualified justices from the Supreme Court without good cause, he threatened the independence of judges at all levels, and provoked a partisan stalemate that has left two vacant seats on the high court. This was a power grab gone wrong.

The public gives him top marks for his handling of Sandy, but the record is mixed. Why would his administration park NJ Transit trains in a low-lying area where they flooded, causing $120 million in damage? Why did the federal government have to strong-arm the state to include more relief for renters and Spanish-speakers than Christie had proposed? And why should anyone believe taxpayers got the best price on refuse removal when the governor awarded a no-bid contract through a political friend?

Then the editors endorsed him for re-election.

To their credit, they admit now to their mistake.  Recognizing the "long list of deep reservations" at the time, Board chairman Tom Moran acknowledges "we could have skipped the endorsement altogether" but, given it was a presidential election, "swallowed our hesitations (sic) and endorsed Christie."

Unsurprisingly, Moran couldn't bring himself to a complete apology.  Although "we knew Christie was a bully" and he "boycotted the editorial board for years, an attempt to bully us into more loving coverage,"

we didn’t know his crew was crazy enough to put people’s lives at risk in Fort Lee as a means to pressure the mayor. We didn’t know he would use Hurricane Sandy aid as a political slush fund. And we certainly didn’t know that Hoboken Mayor Dawn Zimmer was sitting on a credible charge of extortion by Lt. Gov. Kim Guadagno.

His "crew" (or what would be termed his "posse" were he younger and black) "put people's lives at risk in Fort Lee" because it believed the governor would have approved the action, which was not expected to come to light.  The paper's editorial board did know, additionally, that the office of the governor of the State of New Jersey arguably is the most powerful statewide elected office in the nation and that, yes, he figuratively threw his weight around continually.  One such instance transpired in the affluent,  rural (by New Jersey standards) county of Hunterdon, in which the county prosecutor was dismissed after a 43-count indictment his office had obtained was dismissed upon the request of the then-Attorney General, appointed by Christie.  Last week, that county prosecutor, Bennett Barlyn, explained (transcript, here) on Up with Steve Kornacki

Very quickly, 2008, the sheriff is elected. She hires as her undersheriff an individual with a very checkered pass, who is subject to a state investigative report for wrongdoing in his capacity as somebody in a Warren (ph) chapter of the ASPCA. Thats the first issue. Immediately after assuming office, our office, the Hunterdon County`s prosecutor`s office, starts receiving information from an inside source of various wrongdoing in the office, and an investigation commences.

What`s interesting, Steve, is the first thing we do is contact the attorney general`s office, who is the chief law enforcement office in New Jersey, say we need some help here. There`s a conflict. We have two county law enforcement agencies who are probably going to go head-to-head in this investigation. We need your assistance. Several letters were sent, and all of them were not responded to. So we were really left to pursue this on our own. And that becomes important later on.

We obtain evidence. It unfolds like any other typical criminal investigation. We talk to witnesses. A judge signs off on a search warrant. Searches are conducted. More physical evidence is obtained.

In 2010, after Governor Christie wins his first term, members of our office go to the attorney general`s office and inform then Attorney General Dow that this case is ripe for presentation to the grand jury. And the evidence is presented, and Attorney General Dow, this isn't really disputed, gives the green light for the case to go forward. So our head of special investigations, a very experienced white-collar criminal prosecutor named Bill McGovern (ph) begins presenting the case to the grand jury. The case in March of 2010, the grand jury returns the indictment, 43-count indictment, along with a very lengthy, detailed report called the presentment, which provides information about wrongdoing that doesn`t rise to the level of criminal acts.

The day the  indictment was unsealed our prosecutor is compelled to resign. Somebody from Trenton is installed, and the dismantling of the case begins. Evidence is shipped from Trenton -- I`m sorry, from Hunterdon to Trenton. The lead prosecutor is essentially removed from the case two weeks before the dismissal, and finally on August 23, 2010, the head of the corruption bureau of the attorney general`s office marches into court and claims that there were numerous factual and legal deficiencies with the indictment, it`s dismissed. That day I complained to the acting prosecutor, said clearly there are political influences involved. Legally, there`s no way that all 43 counts could be dismissed.

The next day I`m suspended without explanation. Asked for an explanation, told I`m not entitled to one. Give my access cards in. Three weeks later, I get a one-sentence dismissal letter from the Division of Criminal Justice.

Barlyn says four grand jurors interviewed separately have "said there's nothing wrong with this case" and the case's lead prosecutor "as well as our first assistant at the time, have all agreed with our contention that the case was improperly dismissed for political reasons."  He is seeking in state appeals court to have the grand jury's indictment unsealed.

Still, even though the Star-Ledger had plenty of reason- stated, and unstated, in its original editorial- to oppose Christie's re-election, it went ahead with its endorsement. Moran pleads

If one of the tea party favorites gets the Republican nomination, then the country is at risk. Because as we have just seen, one scandal can flip the board in politics. What if Hillary Clinton is the Democratic nominee, and some dark secret emerges about her tenure as secretary of state? How does President Rand Paul sound to you?

Now ask yourself this: If the Republican primary came to a choice between Paul and Christie, which candidate would you endorse?

"Even now," he pleads "I’d pick Christie in that primary."

Not buying it.  Rand Paul has about as much chance of becoming the next GOP presidential nominee as you have- if you're not a natural born citizen of at least 35 years of age.  He will not, nor will ever, be the presidential nominee of a major political party.   Not in his lifetime, yours or mine.  His presence in the race will serve primarily to enhance the prospects of a guy not from inside the Beltway, of a candidate such as Chris Christie, whose claim to conservative primary voters is secured through vast funding by Wall Street and animosity toward workers, rather than racial animosity or a theocratic appeal.  When Rand Paul and Chris Christie had their tiff last year, it only added to the governor's credibility among the money men (and, yes, they virtually all are men) inside the GOP.   Christie's competition for the nomination never has been Rand Paul but Cruz, Huckabee, Bush, Rubio, and, especially, Governor Scott Walker.

Moran noted that the endorsement stemmed in part "on education, the most important issue for any governor, Buono ran well to the left of President Obama. She embraced the state’s regressive teachers’ union and its relentless efforts to protect bad teachers and stunt the growth of even the best charter schools."

Of course, Buono tried to "stunt the growth" of charter schools, the for-profit ventures which are publicly funded, squeeze funds from the traditional public school system, and already are a train wreck for the major New Jersey cities of Newark and Camden. However, the difference between the progressive Buono and the just-for-show President probably was only one reason the latter largely chose to avoid the race and Barbara Buono.   Monday, The New York Times reported the former State Senator

would prefer to talk about the “beautiful” emails she gets from supporters, including one from “what’s his name? I’m really bad with names. I can admit that now,” she has clearly not forgotten the names of the prominent Democrats who forgot her.

“Hillary Clinton wrote me a nice letter — after I lost,” Ms. Buono said, pointing out that the potential Democratic standard-bearer did nothing to support the candidacy of the party’s first female nominee for governor of New Jersey. (“You and I are no strangers to the challenges of seeking and holding public office,” read the letter, signed, “Hillary.”) “The vice president called me directly — after I lost.” Senator Cory Booker, the New Jersey star? “No no no. No, no,” she said. “I didn’t get help from a lot of people, and he was one of them.”

The list is rife. Patrick Gaspard, the former White House political director and Democratic National Committee executive director, promised help but did not deliver, she said. The committee’s chairwoman, Debbie Wasserman Schultz, “came at the very end and it was like you were at a funeral, she was just not very encouraging.” When Ms. Buono asked the chairwoman to send out an email from her fund-raising list, Ms. Wasserman Schultz suggested she would and then “didn’t even do that; isn’t that sad?” (Ms. Wasserman Schultz has since gone on the Christie warpath, following the governor around the country and telling reporters: “Chris Christie has a culture of intimidation and retribution in his office. It was directed at his own constituents.”)

But Hillary Clinton does not hold office, no one has heard of Patrick Gaspard, and Debbie Wasserman Schultz already had proven herself little more than a mouthpiece for the President.  Moreover, while standing on the sidelines, none of them had actually furthered the re-election of Republican Chris Christie, which cannot be said of one of the individuals shown yukking it up with his buddy in the photo below: 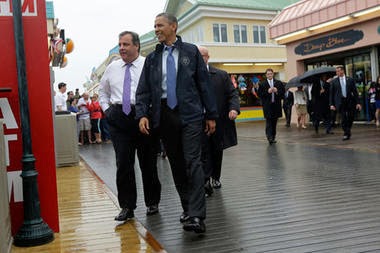