Standing Up For Immigrants, As Long As They're Illegal

In 2010, the voters of Fremont, Nebraska approved by referendum city ordinance 5165, which mandated renters pay $5 for an occupancy license and prohibited landlords from renting an apartment to illegal immigrants. Violators would be subject to a $100 fine. The ordinance also required employers to implement E-verification, though violation would be considered a civil offense.  While the latter portion of the law has taken effect, the housing piece was upheld only recently (by the 8th US Circuit Court of Appeals) and is not due to go into effect until thirty days after the results of a special election are certified as final.

On Tuesday, voters in Fremont decisively rejected a referendum to repeal the ordinance, though the city fathers and mothers (parents?) fear substantial legal costs as the measure is challenged in court.  Last year

Tim Butz, the Assistant Director with the Fair Housing Center of NE-IA, presented to the Fremont City Council explaining the impact the ordinance would have on federal funds, and how they could keep from losing them.  To get Federal Community Development Block Grant funds, cities are required by law to affirmatively further fair housing.  That means promote fair access, and equal opportunity for housing.

Butz says the U.S. Department of Housing Urban Development’s stance is to leave the legalities up to the courts, as it is being challenged.  In the meantime, they are paying much closer attention to Fremont so the city doesn't discriminate.

"We would hate to see them lose this federal funding and the opportunity for growth that this federal funding brings, but the reality of life is that he who pays the piper calls the tunes and HUD is not going to ignore a 45 year old law,” Butz described. "Their only choice in the matter is to live up to the duty of the law and to start taking this affirmatively furthering fair housing concept seriously and address it head on."

In the last 15 years, Fremont has received $7.1 million in CBDG funds for downtown revitalization, infrastructure, and economic development.

Federal fair housing law prohibits discrimination on the basis of race, color, religion, national origin, sex, familial status, or disability.  Whatever may motivate the citizens of Fremont- and it undoubtedly varies from person to person- prohibits "the harboring of illegal aliens" and requires "occupancy licenses, providing judicial process, (and) repealing conflicting provisions."   It defines an "illegal alien" as "an alien who is not lawfully present in the United States, according to the terms of United States Code Title 8, Section 1101 et seq."

Nothing about race or national origin there.  Code Title 8, Section 1101 et seq  defines "alien" as "any person not a citizen or national of the United States."

Defending the ordinance in court may not be wise.   Plaintiff attorneys supporting a group on the basis of ethnicity- even if, as in this case, no ethnic group is singled out- generally are well-funded, in contrast to the plight faced by individuals who are disadvantaged on the basis of economic status. But for the federal government to prevent a municipality from requiring landlords to rent only to persons in the country legally defies common sense.

The estimated backlog for legal immigration is four million people, NPR reported a year ago. Those human beings, however, came to the country legally (other "aliens," below, from ballooncartoons.com). Their cause is not high-profile, and their representation negligible.  It is, sadly, America circa 2014. 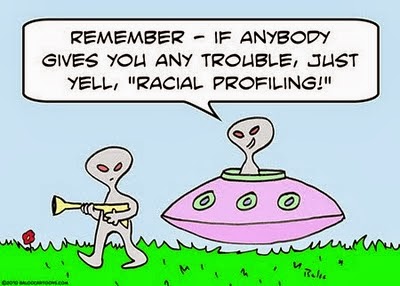