Even- especially- after admitting to what he termed a "glib" remark, Barack Obama remains the smartest person in the room, if not in Washington, D.C.

According to ABC News, while in Waukesha (is there a better sounding name for a town?), Wisconsin lauding vocational education and highlighting the administration's review of job training programs:

But I promise you, folks can make a lot more potentially with skilled manufacturing or the trades than they might with an art history degree," he continued, to some audience laughter. "Now, nothing wrong with an art history degree. I love art history. So I don't want to get a bunch of emails from everybody. I'm just saying, you can make a really good living and have a great career without getting a four-year college education, as long as you get the skills and the training that you need.

University of Texas art history instructor Ann Collins Johns, however, was not amused and sent the President an e-mail in which, reported CNN,

"We really work hard on teaching students…who come in and take an art history survey class how to think, read and write critically, because that's what you do with art,” she wrote. “It's not just looking at a pretty picture. You have to call upon all of your resources to come up with some sort of interpretation."

She also attempted to “dispel the notion that [art history] is elitist.”

“Increasingly the discipline is much more global. We really teach the arts to a wide range of students with a wide range of backgrounds, and we are teaching the arts of Africa, Asia, South America, Central America and we have a global outlook and that tends to change the whole field."

She received an e-mail from the correspondence supervisor at the White House which included a scan of a handwritten note signed "Sincerely, Barack Obama."  The President wrote

Let me apologize for my off the cuff remarks. I was making a point about the jobs market, not the value of art history. As it so happens, art history was one of my favorite subjects in high school, and it has helped me take in a great deal of joy in my life that I might otherwise have missed. So please pass on my apology for the glib remark to the entire department, and understand that I was trying to encourage young people who may not be predisposed to a four year college experience to be open to technical training that can lead them to an honorable career.

Obama was smart enough- as are virtually all politicians- to label his comments an "apology."  Further,  he demonstrated enough insight to recognize his remark as "glib."  That alone might qualify the response as an apology while, as wise politicians know to do, he defended himself, maintaining he was "making a point about the jobs market, not the value of art history."  Shorter Obama: "you missed my point, Ms. Collins."

Dr. Collins pointed to the diversity of students in the field, as well as the effort to expose those students to culture beyond the U.S.A., things which the first black President- who spent a few of his formative years growing up in Asia- generally finds valuable.  Instead, art history can give one "a great deal of joy."

Johns was genuinely pleased at receiving the note- not everyone receives a letter personally signed by the President of the United States, and Johns proceeded to post it on Facebook. She defended the President, as so many Democrats/liberals have been maneuvered into doing, by pointing to his extremist critics.  "He's trying to be entertaining and everybody jumps on his case," she stated, suggesting that the President is right because his opponents are so wrong.

Still, the U.T. lecturer tried to dispel the notion that her field of study is elitist.  Instead, Barack Obama did his little bit to reinforce it as elitist.  And is it possible for anyone to be any more patronizing? 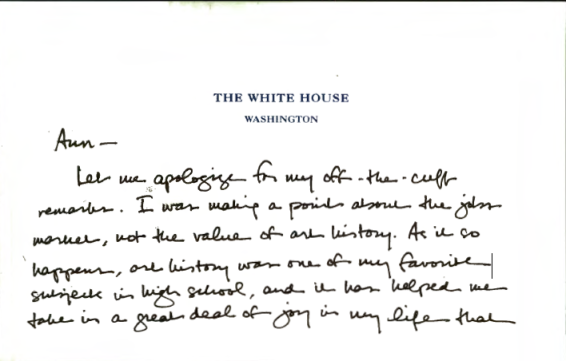 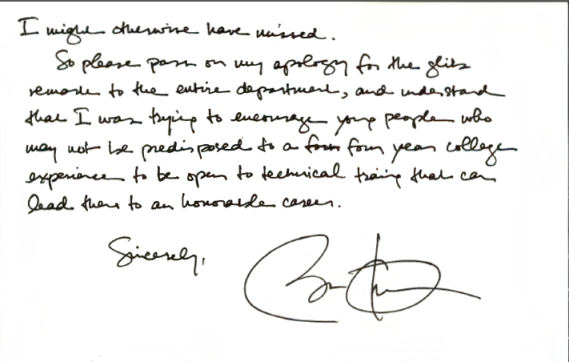