Pay No Attention To That Man Behind The Curtain


Dorothy, we're not in Kansas anymore. As DOMA is upended, states overturn same-sex marriage bans, and courts unanimously side with gay rights advocates, there are states which not only are holdouts but in which legislators are trying to go much, much farther. Besides the aforementioned Kansas, as of 2/21/14 there were  Idaho, Nevada, Ohio, Oregon, South Dakota, Tennessee, Utah.

And of course, Arizona, where Republican Governor Jan Brewer must decide by Saturday morning to veto (as is likely) ostensibly anti-gay legislation or it will go into effect (photo from Matt Connolly of Mother Jones). 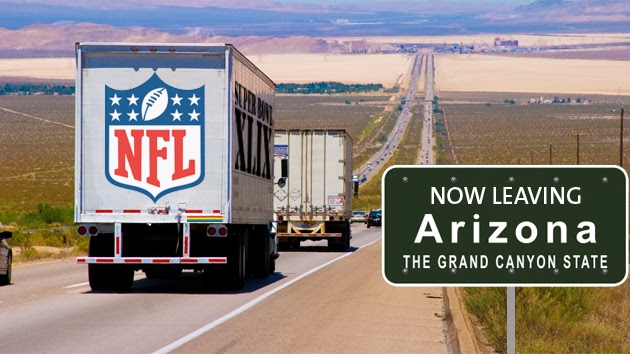 Atlanta Journal-Constitution columnist Jay Bookman on Monday remarked that a similar bill in Georgia "was filed and is being pushed solely because that's what all the cool conservative kids are doing, and because it sends a message of defiance to those who believe that gay Americans ought to be treated the same as everybody else." But that is only the means to gin up public support, especially among evangelical Christians, who should to be exorcised that under terms of the legislation, all manner of discrimination would be legal, including a Muslim cabdriver who refuses to drive a customer to a bar. Before these bills came to light, Amanda Marcotte described a strong sense of victimization among conservative Christians:

A kid who was disciplined for fighting is turned, in the Christian myth machine, into a kid who was punished for quietly praying to himself. A track athlete is disqualified for disrespecting a teacher, but the Christian media says it was because he thanked God. A Southern Baptist website is blocked for accidentally distributing malware, but in the hands of the conservative press, it’s oppression. They need to be victimized.

This has spurred Repub legislators eager to feed on the cult of victimization to achieve more commercial and nefarious objectives.  Salon's Emmet Rensin, while conceding it is "less shiny an object than legally-sanctioned bigotry," notes the Arizona the fact sheet for Arizona 1062 "expands the definition of person to include any individual, association, partnership, corporation, church, estate, trust, foundation or other legal entity."  He explains

That means that the right to refuse service to potential clients on religious grounds wouldn’t be newly granted to ostensibly secular businesses on non-profits, but rather that such entities are “protected” under the old First Amendment because they – like individuals – are “people."

Had they wanted, lawmakers could have gone the other route to enshrine the corporate right to bigotry. They could have created a new legal shield for businesses, explicitly granting them an expanded interpretation of the “right to refuse service to anyone."

But that’s not what they did. Rather, they used the framework of First Amendment religious freedom to justify the right to refuse service, and specifically referred to “people” as the beneficiaries of this new “protection”. They chose that course because in doing so, it allows this bill to achieve a second, more insidious goal under cover of the headline-grabbing license to discriminate.

Why? The First Amendment rationale was no doubt employed in part to better protect the legislation against legal challenge. A less Constitutionally grounded effort to the same end would more easily fall afoul of strict scrutiny. But it’s larger than that. For decades, conservatives have been advancing the notion that the protections afforded by the Bill of Rights apply not just to “people” in the ordinary sense of the world, but to less traditionally conceived persons, including corporations.

The apex of that effort came in 2010, with the Supreme Court’s Citizens United ruling. By a 5-4 margin, the court declared that corporations were entitled to the same free speech protections as individuals, overturning decades of precedent.

While far less flashy, the personhood provision in SB 1062 was designed to further this effort, granting legal entities another first amendment freedom in the form of religious liberty.

It's just another conservative con, in which "the wedding-cake scenario, where an employee at a bakery or a photographer is asked to provide services to a same-sex couple celebrating a wedding" outrages and becomes the stuff of legend. Rensin concludes SB 1062 needs to be fought "because it’s cartoonishly bigoted, of course, but also because it’s a small step in a long effort to redefine the kind of people this country is for at the expense of those it’s long been of and by."